With the season completed and our place in next year’s Champions League secured, FC Bayern fans have been following the transfer marker closely. The smart money currently has Bayern brining in Boateng and Neuer to go with Nils Peterson, and missing out on Coentrao and van der Wiel. This could all change over the next few days, so we’ll be back with more on that later this week. For today, I wanted to go over some of the things from this season I will remember months and years down the road.

A million important things happened at FC Bayern this season, and this post isn’t intended to be an exhaustive list. If I’m leaving out something that you think has to be included, let us know in the comments. This is just meant as a subjective discussion of some of the images that I’ll remember from the 2010-2011 campaign.

(1) I will definitely remember the crushing second-leg loss to Inter in the Champions League. Now, given the high stakes of the match and the brutal manner of defeat (winning 3-1 on the aggregate, giving up 2 second half goals to lose), this would have been a terrible defeat no matter what. But I think this defeat was even worse than a typical crash-out-of-a-big-competition loss. At halftime of this match, when we looked like we would go on to win, I was able to convince myself that all of the problems the club had encountered over the course of the year really weren’t bad. Yeah, our coach sometimes did a poor job, our defenders looked slow, and we couldn’t create much offensive excitement if Ribery or Robben was hurt. But still - we were about to advance to the Champions League quarterfinals! Maybe we could even sneak into the semis! How bad could it be?

Once this game was over, there was no denying it - this team needed a re-build. Our formations and substitutions made no sense. We couldn’t protect a lead. Basically, all the things we had seen over the course of the Bundesliga season weren’t an illusion. And I’ll remember the loss to Inter and its aftermath and the moment when it couldn’t be denied any longer.

(2) I’ll remember being as angry at a head coach as I’ve even been. Clearly, all of our problems this season can’t be blamed on van Gaal. Injuries, mistakes, and even bad luck on the part of several players were a big part of our struggles. But from January onward, it was pretty clear to be that the players had tuned out LvG and were just waiting for him to get fired. His refusal to mix up his tactical approach, even after suffering repeated losses to less-talented teams, bordered on coaching malpractice. 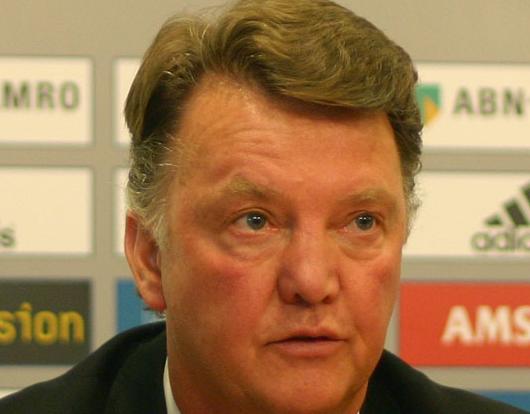 We'd forget you if we could, sir

And then, when it was clear that he had lost the locker room and he couldn’t be brought back next year, the board did the stupidest possible thing: they announced that he’d be leaving over the summer, but would still coach the rest of the season. The players, who were already not showing van Gaal a great level of respect, started to ignore him entirely. What happened was inevitable: after the next awful performance (an ugly draw vs. Nurnberg), van Gaal was let go immediately, and Jonker was appointed the temporary replacement - exactly what should have been done in March.

(3) This was a year when previously flawless FC Bayern players started to look human. Don’t get me wrong, I still think we have one of the most talented rosters on the planet. In the right system and with everyone healthy, our collection of talent is a threat to win any competition, including the Champions League. But there were a few signs of slippage this year. Schweinsteiger looked very ordinary at times - not bad, just ordinary - especially when trying to track back to cover opposing forwards. Lahm had a lot to do, being the only defender consistently in the line-up on a club that was dedicated to non-stop attack, but he also looked like less than his usual world-class self.

Then, of course, there were the injuries: Robben, Olic, van Buyten, and Ribery all spent significant time on the shelf. And, to be honest, 3 of those 4 (Robben being the exception) had periods when they didn’t look very good even when they were playing, possibly because they were trying to play through the injury / came back too soon. 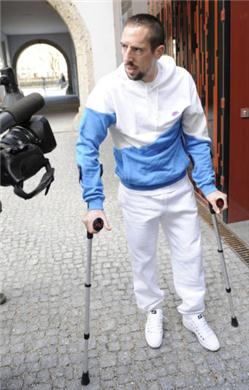 Sidelined with a bout of rickets

I guess there are a few lessons to be taken from this - always have a deep bench, don’t count too much on one or two guys, etc. - but more than anything, I think it just shows how delicate is the balance of a winning club. We had practically the same roster that we did the prior year, when we won the domestic double and were one of the best three clubs in the world. Throw in a few injuries, a bit of long-term fatigue, and a couple players having slumps, and we’re fighting just to get into the Champions League final qualifying round. It can happen to anyone. I guess that’s part of what makes it a fun sport to follow; it would get boring if we won the Bundesliga by 10 points every year.

Of course, if you need the occasional bad season to keep things exciting, then we’ve certainly paid our dues. So, let’s get back to winning trophies. Starting now.

(4) As much as any other season in memory, this will be remembered as a year when the transfer rumors ran wild. Most big clubs will make at least a few moves in the summer transfer season, and will often be linked with even more moves than they end up making. But I don’t know that I’ve ever experienced anything like the last 4 months. There was the Neuer saga, which most people expected would end with a trip to the Allianz, but Manchester United stayed in long enough to make it interesting. There were weekly reports from goal.com that Fabio Coentrao was "as good as signed," all of which now appear to be unfounded. Alex, Arturo Vidal, van der Wiel, Boateng, Berbatov, and a host of other world-class players have all been mentioned. Basically, if you took every player who had been "rumored" to be joining FC Bayern by some newspaper or web-site and put them all together, you’d have a squad that might win the Champions League.

As it turns out, our pick-ups will probably be huge in quality, but not as big in quantity as some had predicted. Boateng and Neuer are looking like the likeliest targets right now, and Nils Peterson is as good as joined. There are a few more guys that KHR and Uli are said to have their eyes on, but it might take until January to figure out what we need the most, especially on the offensive side of the field.

Whatever happens, we’ll be keeping an eye on the news wires and reporting what we hear. So subscribe to our twitter feed at http://twitter.com/bayern_offside to stay informed, and send along any interesting rumors you hear of to bayern.offside@yahoo.com.

(5) Despite the numerous stumbles over the course of the season, I will remember the good run under Jonker to close the season in a top 3 spot. Since van Gaal was shown the door, the club has won 4 out of 5, the lone blemish being a 1-1 draw against Eintracht Frankfurt. Over the course of that time, we’ve outscored our opponents by a collective score of 20 goals to 5. After the Schalke win on April 30, most Bayern fans were feeling a little more comfortable about our position, and the next two weeks left nothing in doubt. So Jonker deserves a lot of credit, considering where we stood when he took over and where we are now.

(6) More than anything else, I will remember this as the year I took over the world’s biggest English-language blog of my favorite club. If someone had predicted this last year, I would have said they were certifiably insane. And yet here I am.

This blog became widely-read and universally respected under Luke, and I’m just trying to keep up the tradition. So thanks to anyone who’s left a comment, sent me a story over e-mail, "friend"-ed the site on Facebook, subscribed to the twitter or RSS feed, or just tuned in to read. Looks like a busy summer ahead, so stick around as we prepare for the upcoming season, where I expect to see three trophies lifted at the center of the pitch at the Allianz.