Ten hours from the kick-off of the final match of the season, in which Bayern will look to close on a winning note (and maybe sneak into second place). We covered most of the angles in the preview, but a few things to look for when the opening whistle blows:

(1) Mario Gomez has basically sewed up the Bundesliga scoring title already (barring a career day from Freiburg's Papis Demba Cisse, who has 5 fewer goals that Gomez's 27).  This will be the first time a Bayern player has led the Bundeliga in goals scored since Luca Toni in 2007-2008.  Interestingly, Gomez was in 2nd in the scoring race that year, with Stuttgart at the time. 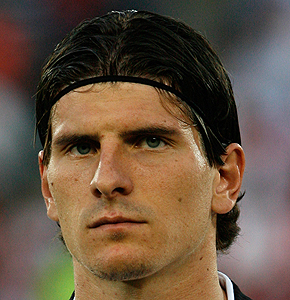 Damn right this is serious business

But even more impressively, if Gomez can add one goal tomorrow, he would equal the most goals scored in a single season in the 21st century (both Grafite in 2008-2009 and Concalves da Silva Ailton in 2003-2004 bagged 28 goals).  If Gomez can somehow drill home 2 goals tomorrow, he'd have the most prolific single season of goal scoring in the Bundesliga since the turn of the century.  Not bad for a guy who wasn't even starting at the beginning of the season.

(2) In the same time period (21st century), the highest goal total of any single team in a single season was Wolfsburg's 80 in 2008-2009.  This was their year when Grafite and Dzeko tore it up.  Right now, Bayern leads the Bundesliga with 79 goals scored.  If we can snag 2 tomorrow, we become the most prolific single-season offensive team in the Bundeliga since the turn of the century.

A lot of numbers, I know.  Just focus on this: if Mario Gomez can score two goals in a Bayern win, and Papis Demba Cisse scores fewer than 7 in a Freiburg win, then we're basically just the fucking balls.

Join us at kick-off for some live chat, if you're interested. Viva viva FC Bayern!