First, some brief clean-up of matters that arose earlier in the week:

(1) Our intrepid readers helped to clue us in on the matter of "agricultural fouls." First, reader Alpine Pete write the following:

"I would assume that an "agricultural" foul is one that has all the grace and skill of a huge farm lad loading hay into the barn...ie no skill and grace but rustic, heavy-handed and effective. I always think of what Benny Hill said about assuming, though …"

Then, we had reader Erik Sherwood explain it thusly:

“Alan Fountain (my favorite EPSN3 Bundesliga commentator) likes to use this term quite a bit (e.g. to describe the tackling of Schalke's Papadopolous), but as far as I can tell, it's a usage unique to him. From context, I take it to mean that the foul was so obvious and/or rough that you'd only expect to see its like committed by a rural rube playing for his village club (which uses the local cow pasture for a pitch, one imagines), not by such subtle, urbane, and expensive players as FC Bayern and all the other Bundesliga clubs field.”

So, an agricultural foul is apparently one that is rough and ungraceful, in the style of someone who would work on a farm, or of a low-budget game that took place on a farm.  Apparently, my two suggestions (that it referred to the well-maintained vegetation onto which they fell, and that the one doing the tackling resembled a tractor) were off base.  Thanks, guys.

(2) CNN has confirmed the Altintop and Ottl departures.  We has already pretty much expected this in Wednesday’s post, but now we can feel sure.  With respect to Altintop, he had a tough job in always coming in when Ribery or Robben was injured/suspended.  Hard for anyone to not look second-rate trying to fill in for one of those two.  We’ll see whether the job falls to Kroos or Pranjic, or whether a new back-up wing is brought in.

As far as Ottl, he’s just a victim of the over-crowded midfield.  Even with the sale of Mehmet Elicki, we’ll probably go with Bastian + Tymoschuk or Bastian + Gustavo at CDM next year, with the one not starting used as the primary back-up and occasional starter for Pokal matches, etc.  And Kroos will likely remain the emergency fourth-line CDM.

(3) As of now, I’m not going to reprint anything that goal.com says about Coentrao.  It’s now been two months of “he’s as good as signed,” and I’m not going to subject everyone to that for the whole summer.  If and when he’s actually signed - confirmed by someone other than goal.com - we’ll report it here and on our twitter feed at http://twitter.com/bayern_offside.

Tomorrow, we get out last chance to watch Bayern in a meaningful game for a few months.  The good news is that there’s definitely something to play for: we currently sit three points back of Leverkusen, meaning a win over Stuttgart combined with a Leverkusen loss to SC Freiburg would leave us in second place (based on goal differential).  That would allow us to skip the Champions League final qualifying stage next year, and go straight into the group stage.

As I said earlier this week, I don’t think that’s very likely.  Leverkusen needs only to hold out for a draw, and they know this, while the Freis have relatively little to play for.  Plus, Leverkusen has had really good away form: 10 wins, 3 losses, and 3 draws.  But it’s still a possibility, and even if Leverkusen manages to get a point to seal second place, FC Bayern will be going all out for a win, so we should probably get a pretty good show on our end.

After stomping St. Pauli last week, Bayern comes into the match riding high.  We will be without Ribery, though, as he picked up his fifth yellow last week.  I expect that Müller will move to the wing spot, with Klose getting a start in the second striker role, especially because this could be his last match in front of the home fans. 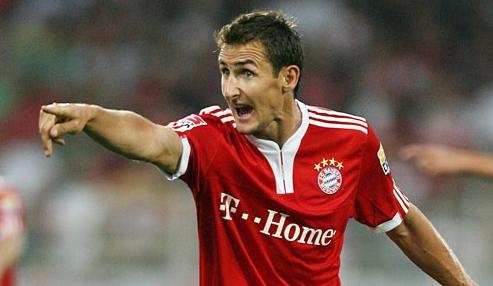 End of an era?

In fact, a few guys might be playing their final match for Die Roten: Klose and Altintop are at the end of their contracts (with Hamit as good as gone, Miro a “maybe”), van Buyten will have to decide if he’s happy being a respected back-up and team leader type, Ottl might get a chance to run for a few minutes in his last match, and even Gustavo’s name has been mentioned as someone who could be shopped around (though I’m hoping against that).  Breno would qualify, but his knee injury on Wednesday means that (1) he’s less likely to be sold this summer, and (2) he can’t make a final appearance anyway.

Stuttgart, meanwhile, has played very well recently, winning four straight and helping Bayern by toppling Hannover last week.  They will be without Cristian Molinaro and Cacau, both of whom are nursing injuries, but they will have the explosive forward Martin Harnik at their disposal.

The match will be carried live on ESPN 3, for those with an eligible internet provider.  ESPN Deportes is running the match as well.  Come back here early in the morning if you’re interested - we’ll be cooking up some sausage and peppers and running a Match Day thread.  Thanks for reading.