In our ongoing effort to explore the transfer market from every angle, and to find something to write about during the middle of the week, we thought today would be a good time to analyze some possible player exits. Newton’s Third Law of Motion states that, for every action, there is an equal and opposite reaction. While FC Bayern might not be end up selling exactly the same number of players that we buy, a big spending spree will certainly be accompanied by at least some guys packing their bags.

We’re going to work our way through the possibilities in the same fashion as we did our Rumor Round-Up a month ago: for each player discussed, we’re going to rank both the likelihood that the guy in question leaves Bayern this summer (1 = no chance, he’s definitely staying; 10 = he’s already gone) and the degree of damage that it will do to our roster (1 = who cares, we don’t even want him; 10 = a disaster that we couldn’t recover from). And for each, a 5 would be right in the middle.

One final note: predicting these is even harder than predicting arrivals, because you have to first make a good guess as to who’s going to be arriving before you can figure out the departures, and also because some guys who are clearly leaving in the future might hang around until January while a deal is worked out. So I’m sure there will be some disagreements - feel free to argue your case in the comments, or send them to me at bayern.offside@yahoo.com. Away we go …

This one is already a done deal, as Kraft has apparently reached a four-year agreement with Hertha Berlin. We’ve discussed the GK situation repeatedly, and everyone knows that Neuer-to-Bayern is expected to happen this summer. Even if we don’t get Neuer, Bayern is likely to upgrade with a different ‘keeper such as de Gea or Lloris. And Hans Jorg-Butt has taken over the keeping duties from Kraft recently anyway. So, not a big loss.

I will point out that, at certain times this year, I really think Kraft did a good job. His save of a penalty shot vs. SC Freiburg may have saved our season. He’s not the equal of Neuer, but I wouldn’t be surprised to see him become the one of the Bundesliga’s best ‘keepers over the next few years (keep in mind he’s only 22).

Of course, there’s this:

Several reporters are saying Altintop to Real Madrid is a done deal. This hasn’t been confirmed yet, but wherever he goes, he almost certainly won’t stay with Bayern. I always cringed when I saw Altintop take the field, but that wasn’t because he’s an awful player or anything (he’s actually got some decent skill). It’s just because he brought so much less to the table than the guys he was replacing - usually Ribery and Arjen Robben. Given the propensity of these two to get injured or fall into slumps, we’re going to need a better, more explosive back-up at the wing position.

Whether that’s Kroos or Pranjic, or whether we bring in someone new, remains to be seen. But Hamit is gone, especially with his contract expiring this month - we’d have to extend a new offer just to keep him.

It’s a sure sign a player sucks when you can’t find any articles discussing him in English. My limited understanding of German leads me to believe he’s headed for the exit door, possible following Kraft to Hertha Berlin.

All I know about Ottl is that he rarely gets into the game, and when he does, I wonder what he’s doing there. Now, to be fair, maybe if he got regular time as a starter, he’d look a lot better. But considering he can’t get on the field now, and that’s before we bring in a raft of new faces this summer, I can’t imagine he’s ever going to start for us. Good luck, Andy.

The first genuinely stressful decision on our list. Goose is a talented guy who can play multiple positions. He’s a more natural CM, where his tackling ability and energy are a good complement to Bastian’s passing and vision. He can also play CB in a pinch, he’s under contract until 2015, he has good experience in the Bundesliga, and he’s still only 23 years old.

So why would we consider getting rid of him? Two reasons: first, there’s a possible log-jam looming at CM. Tymoschuk and Bastian have been playing at the double-six recently, and doing a good job. Kroos can also play there if need be. With just that set-up, Gustavo would still be needed - he might end up starting over Tymoschuk, and even if he doesn’t, he’s a great guy to have as a versatile back-up. But if we bring in a new middie (Arturo Vidal?), we suddenly have too many guys for two spots.

Second, he’s talented enough and young enough to actually bring something in return. Either as a piece in a big move (to get Neuer or someone else), or even as a straight sale to generate cash, Gustavo is someone that other big clubs will really want. I wish we could clear enough room on our roster by just getting rid of dead weight, but that probably won’t happen. We’re going to have to cut loose at least one good, skilled young player. Hopefully it won’t be Goose, but it appears he’s being considered.

Breno had a pretty awful season, and topped it off by getting injured in training today. He’s set to be out a few weeks (at least) with a knee injury.

Up until last week, he’s score on the "likelihood" scale would have been at least an 8.5. Galatasaray, among other clubs, were said to be interested in him. Now, he’s less likely to be moved in the near future. But even if he sticks around this summer, I imagine he’s gone no later than January, especially with several defenders being discussed as pick-up options.

A story in goal.com today says that we’re leaning towards selling Ekici to Werder Bremen. I find this somewhat surprising, considering he’s very young and his wages are low. Yeah, there are a lot of midfielders on our roster, but we can’t find some way to keep Mehmo around? He just turned 21 - he’d be peaking exactly at the point when we need someone to step in for Tymo or even Ribery. 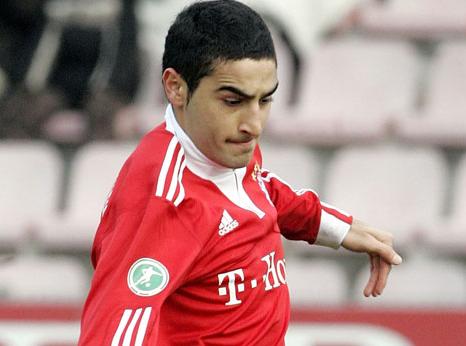 We never even got to hang out

I’m hoping this is just an unfounded rumor. I’d even prefer to lend Ekici out to Nurnberg for another year, rather than selling him now. What could we possible get to make it worth giving up a guy with his talent?

"Damage Done" is a 5.5, even though he hasn’t played for us all year, because it’s important to keep a core of young, skilled players coming down the belt. I could see this being a sale we really regret a few years from now. But who knows, maybe this means that Gustavo is more likely to stick around.

We’ve discussed this before - with a new CB almost certainly on the way in, it’s unlikely that DvB will be starting for Bayern next year. The relevant questions are: (1) would he be the first CB substitute, and maybe even get some rare starts, or would he be buried deep on the bench; (2) would he be happier going somewhere else where he could start; and (3) how important is he in a leadership role.

I’ve said it before, and I’ll say it again: you don’t want to get rid of all your veteran leaders who were around when you were winning trophies. You could argue that we should be "cleaning house" because we have a new coaching staff and several new players … but on the other hand, a bunch of new faces makes it even more necessary to preserve the leadership core. Moving from the van Gaal era to the Heynckes era will go a lot more smoothly if guys like van Buyten are around to help steer the ship.

Anyway, this is another one that might not be resolved until January. It wouldn’t surprise me to see him stick around for a bit, find that he really isn’t getting any playing time in October and November, and then ask out in the winter. I know a lot of clubs would want him, especially if he plays well for Belgium in the Euro Qualifiers.

Hell, maybe he’ll move to newly promoted QPR. I would buy that jersey in a second.

In a sense, Miro presents the same "veteran leadership" issue as van Buyten. But I never had the impression that Miro was the same kind of vocal, take-charge guy. And anyway, he’s been out of the line-up for a while now - this season for him has been like what next season might be for van Buyten.

Even leaving aside the possibility of bringing in someone new (don’t worry, we’ll start the Berbatov count-down pretty soon), Klose would be out of a spot as the first back-up once Olic is healthy. For someone who’s had such a great career, I can’t imagine him being happy in that situation. If he was under contract for one more year, it would be different - we could say, "hey, just let him play out his contract, and maybe we’ll need him if there’s a rash of injuries." But with his deal expiring, it probably wouldn’t make sense to extend a new offer to him.

Besides, doesn’t he seem exactly like the kind of guy that Blackburn or Sevilla or somebody would overpay?

There are a few other possible departures so consider, but we’re over 1,700 words already, so I’ll cut it off here. This is a very complex topic, and we’re interested to hear everyone’s thoughts. Feel free to point out where I’m wrong in the comments section, or e-mail us. We’ll be back tomorrow or Friday with a preview of this weekend’s match vs. VfB Stuttgart. Also, several readers have graciously explained what an "agricultural foul" means - we’re going to look into the meaning of that term later this week as well. Subscribe to our twitter feed at http://twitter.com/bayern_offside to be notified of new posts and other relevant news items. Thanks for reading.