Bayern Munich travels up the E45 to take on Nurnberg in a vital match (well, they’re all vital at this point). After last week’s unconvincing win over lowly ‘Gladbach, Bayern has a tenuous grip on the third and final Champions League spot for next year: we currently sit a single point ahead of Hannover with 6 matches left to play. A win tomorrow at Nurnberg would give us a slightly more solid grip on that third-place spot, and perhaps a chance to put pressure on Leverkusen for second place. A loss or draw tomorrow would leaves back in the realm of worrying about CL qualification.

First, a look at the opponent: Nurnberg has had a solid season.  Despite not having a supremely talented line-up, they currently sit in sixth place, only 3 points back of a Europa League spot.  They also have a decent +5 goal differential and have taken 27 of a possible 42 points at home.  But Bayern has a definite edge in class, with 17 more goals scored in Bundesliga play and having trampled Nurnberg in our previous meeting.  In that match, it appears we won 3-0, although I actually thought it was more than that, and definitely remember we basically destroyed them from the opening minute. 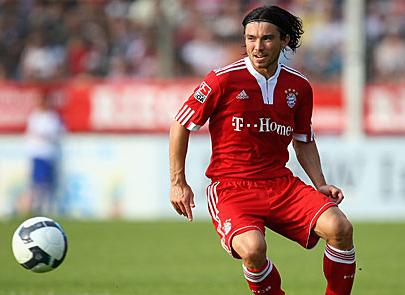 Another good match from DP would help. And surprise.

Some fun facts about Nurnberg, gleaned from the internet: they are the only club in the BL without a home draw this season, but they also lead the league in draws on the road with 6.  This could indicate that they aggressively attack at home but tend to play it safe on the road.  Or, it could be a statistical glitch.  Also, they have been relegated from the 1. Bundesliga more than any other team - 7 times.  Not as pathetic as it sounds, actually, because to get relegated that many times, you also have to have get promoted back into the BL that many times.  A team that gets relegated once and then just sucks wouldn’t have as many.

Also, according to Wikipedia, Nurnberg’s nickname is “Der Club.”  Any of my German speakers want to help us out with the meaning of that?

Last week’s uninspired win featured Pranjic at LB, Gustavo and Badstuber in the center of the back line, and all 6 forward positions basically the same as they’ve been for a while (Bastian and Kroos at CM, R&R on the wings, and Gomez up front with Muller laying in behind him).  Surprisingly, the defense looked pretty solid, with even Pranjic making himself useful.  It was the forwards who failed to create a lot of good chances, and wasted them when they did - especially Gomez, who had a knock-in from close range and managed to just kick the ball 50 feet straight up into the air.  But, consider also that Robben was denied what clearly should have been a penalty in the last 10 minutes - if that had been properly called, the victory would have been 2-0 and perhaps might have felt a little safer.  Anyway, I expect the same line-up, with Klose and Altintop probably the first two off the bench.

Elsewhere, Hannover takes on a dangerous Mainz team tomorrow, needing a win to keep the pressure on Bayern for the last CL spot.  This is a pretty interesting match-up in its own right - the fourth place team vs. the fifth, both in the midst of very impressive years and both currently in Europa League spots.  Mainz actually has a better goal differential (how the hell is Hannover 16-2-10 with a break-even differential?) and is coming off a hard-fought draw vs. Freiburg.  Mainz is an imposing 9-1-4 away from home while Hannover is 10-1-3 at their own place, so something has to give.

Finally, on Sunday, Leverkusen takes on St. Pauli in a game that has big implications for FC Bayern.  If St. Pauli is able to pick up even a point out of this one, Bayern has a much more realistic (I still won’t say “easy”) chance of possibly clawing into second place before the end of the year. This one’s on Gol TV, so tune in on Sunday if you’re so inclined.

(2) Our match will take place in Nurnberg’s famed “EasyCredit Stadion.”  Sounds like another thing Americans have been able to worm our way into and ruin.  But please correct me if I’m wrong.

(3) The Nurnberg weather forecast calls for a clear and fairly warm day tomorrow.  But, if my German is any good (which it isn’t), they currently have an advisory for heavy winds.  We’ll have to see if the winds are still Böen zwischen 65 und 85 km/h um Nordwest tomorrow.

Feel free to use this post as a Match Day thread as well.  Thanks for reading.