Clark Whitney of goal.com has an article discussing the Manuel Neuer situation. In his estimation, Schalke’s big win over Inter, and their almost-certain advance to the Champions League semi-final, make it much less likely that Neuer will make the move to the Allianz Arena this summer. 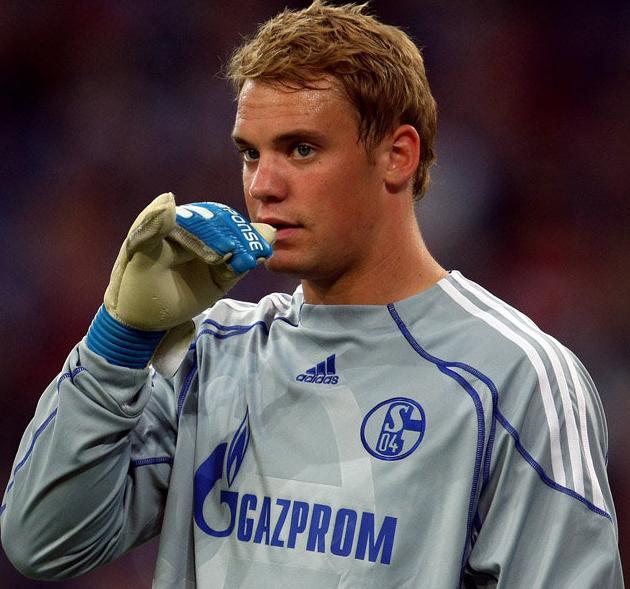 Looks like he's thinking it over real good, does it not?

The idea has certainly crossed the minds of a lot of Bayern fans, and no one has ever claimed that the Neuer-to-Bayern move was a done deal.  But I’m not convinced that Schalke’s recent triumphs make a transfer a whole lot less likely.  While it’s true that Neuer may have an increased confidence in Schalke’s ability to compete with the best teams in the world, it’s also true that Schalke is nowhere near qualifying for European competition of any kind next season.  So if Neuer finds that he really enjoys the bright lights of the Champions League, he could be all the more eager to make sure he’s there again next year.  Clearly this makes it all the more important that Bayern hold on to third place and climb into second, if possible … but we already knew that.

Mr. Whitney’s article further points out that Neuer is a Gelsenkirchen native, and will always have a certain degree of love for his home-town team.  This is certainly true.  At the same time, he’s also a German, and would surely see some value in (1) playing in a line-up full of guys from the German national team, where he’s already accomplished a lot on the international stage, with the promise of more to come, and (2) playing for Germany’s standard-bearing club that has a chance to beat the best clubs from England, Spain and Italy year-in and year-out.

Also mentioned is the reaction of Bayern fans that have criticized the possibility of a Neuer move.  This is certainly a problem - how could I guy not feel apprehensive about going to a club whose supporters are holding up “No Neuer” signs?  If anything scuttles the Neuer transfer, it would be this.  But, Neuer surely knows that these loud-mouthed “fans” don’t represent all Bayern supporters, and I imagine he’s put more stock into what he’s told by Schweinsteiger and Lahm then the insults of complete strangers.  Anyway, the Sudkurve trouble-makers have now set their sights on Uli Hoeness and the recent decision to allow 1860 Munich to delay repayment of debts, so hopefully they’re too distracted to complain about Neuer for a while.

At some point this summer, Manuel will have to make a decision.  If he asks to leave, Schalke will certainly not keep him against his will.  The decision will surely involve a lot of factors, but foremost among them will probably be his chances of winning multiple trophies over the next several seasons - Bundesliga and Champions League titles.  Right now, Bayern is having one of their worst years in recent memory, and yet we’re still in third place in the table, with 60 goals scored and a +26 goal differential.  Last year, we won the domestic double and got to the CL final (which we arguably could have won if Ribery hadn’t been suspended).  This summer, we’re going to revamp our entire defense, and probably start next season with one of the 3 or 4 most talented rosters in the world.

Schalke has had a great year, and I’m sure he has a lot of affinity for his team-mates and his home town club.  But there’s simply no way that they can hope to challenge for Bundesliga and Champions League title every year like Bayern can.  And I’m not rooting against Schalke in the CL, I’m 100% percent in their corner.  The goal.com article doesn’t prove that Schalke’s great run this year would make Neuer refuse to leave.  It could make him realize how great it would be to have the chance to do that every year, alongside the guys he’d also be playing with while making Euro Championship and World Cup runs.

At the end of the day, Neuer is a grown man and he’s going to have to decide what’s best for him.  If he really loves his home-town club so much that he can’t leave it, that’s his choice, and we’ll move on without him.  But I suspect he’s going to come to realize what kind of an opportunity he has if he were to join Bayern, and want to take advantage of it.  Thanks for reading.