FC Bayern’s sprint to the finish line kicks off tomorrow with one of the more interesting games in some time. Bayern takes on Schalke 04 in a game riddled with intriguing sub-plots and surrounded by locker-room drama. Climb aboard as we sort through the dirty laundry of our favorite dysfunctional family.

Before we even get to the game, the first order of business is Arjen Robben’s criticism of the club and its leadership.  According to goal.com, Robben says that the team “missed the guidance of Mark van Bommel” and “lacked true leadership.”  Needless to say, Bastian and Philipp Lahm were unimpressed.  In fact, the Globe and Mail reports that Bastian lost his temper and stormed out of a press conference.

OK, first of all, these clowns need to shut the hell up and go win some games.  For God’s sake, they can’t even keep a lid on this for 16 days?  I should note that there could be some issue with the translation, and reporters are known for picking small quotes out of context and using them to create conflict.  But still - don’t even give them a chance to do that.  Just keep your mouth shut for a bit.  You just came back from a costly suspension because you couldn’t control your temper, sir - you couldn’t wait 3 more weeks to do this interview? 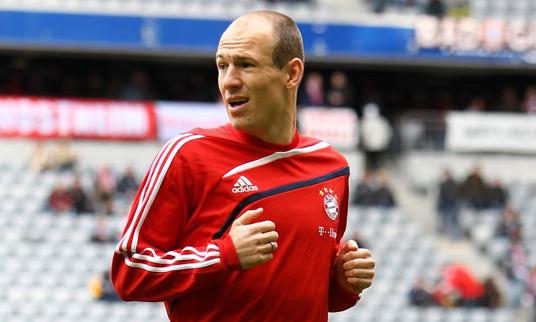 Maybe you could just shut up and play for a bit.

For his part, Lahm has vowed to take it up with Robben himself.  Should be an interesting scene at the team grounds today.  We’ll keep you posted on all that as events take shape.

Meanwhile, there is a game to be played.  As we all know, Schalke’s biggest strength is their stellar ‘keeper Manuel Neuer, who we can probably now say is playing the best GK in the world.  Neuer has refused to sign a contract extension with Schalke, and his move to Bayern this summer is said to be all but done.  But no one feels 100% sure of anything until the papers are signed, and the Neuer-to-Manchester-United rumor is still being batted around.

As far as tomorrow, if Neuer has decided to come to Bayern already, he’s faced with the task of keeping us out of the net tomorrow, thereby preventing himself from playing in the Champions League next year.  Strange stuff, but once the game starts you know he’ll be doing everything he can to keep the ball out.  Neuer is a very competitive guy and it’s impossible to turn that off during a match - even if he’s thinking about next year today, when tomorrow comes he’s going to be his usual solid self.

Reader Tomas points out the possibility that Schalke could run out their back-up ‘keeper Matthias Schober, just to avoid the possibility of any conflict of interest.  This is an interesting idea … Schalke did just play this past Tuesday, and they have another mid-week game coming up this week.  I guess they could argue that they just want to keep Neuer fresh for CL and Pokal competition, regardless of who their Bundesliga opponent is.  No news about a switch yet, but we’ll be monitoring this - keep your eye on this page and our twitter feed at http://twitter.com/bayern_offside for updates.

Although Neuer is getting the headlines, an equally interesting situation is that of Klaas-Jan Huntelaar, Schalke’s dangerous striker.  Huntelaar has been sidelined for a while with a knee injury, and was not available for their mid-week match vs. Manchester United.  The most recent official report said he was out for an additional 3 weeks, and this was 3 weeks ago - theoretically, KJH could be back by tomorrow.  But we have a hunch he won’t be available.  And even if he is, who know how his form will be.

On our side, Sass-mouth Robben’s return means that Klose will probably return to the bench.  Tymoschuk and Bastian are expected to start in the double-CDM formation, with our usual front formation of Gomez up front, Müller in behind him, and Ribery and Robben on the wings.

On the back line, Gustavo is out with his 5th yellow, so DvB and Badstuber will combine their lightning-quick moves at the CB positions.

- The game is on ESPN 3, so pick it up on a free and legal feed if you’re interested.

- I hadn’t realized how poor Schalke’s form has been, especially on the offensive end.  Since the end of the winter break, they’ve managed more than 1 goal just once in the BL, and have been blanked 6 times.

As noted above, some things might be updated as details become available.  Stay tuned, and thanks for reading.