The Short Road Ahead

Share All sharing options for: The Short Road Ahead

Having recovered from the hangover of Saturday’s disappointment, we figured this is a good time to look ahead to the final few weeks of the Bundesliga schedule and try to determine FC Bayern’s chances of securing the third and final Champions League spot. But, because both Bayern and Hannover have only 3 games remaining, this one does not rely on complex mathematical/statistical analysis. I beseech you, don’t run away!

The best way to examine the schedule is probably just to take it week by week, starting with this Saturday’s games.

Needless to say, they're both known as "Die Roten"

Bayern is at home vs. Schalke, in a battle with more sub-plots than we could reasonably explore in one post.  First of all: no, Neuer is not going to let Bayern score in order to ensure he plays in the Champions League next year.  He’s possibly the best ‘keeper in the world, and he didn’t get that reputation by picking and choosing the times when he’s going to play his best.  Besides, would we really want a guy who’s going to do that?

Nonetheless, I actually believe we match up fairly well against Schalke.  With their Champions League match yesterday, we can expect Bayern to be a little fresher.  Klaas-Jan Huntelaar’s status hasn’t been determined, but he’s not expected to play, and even if he does, it will be his first match in over a month.  Except for Howedes, Schalke’s back line isn’t too tough.

They did beat Bayern in our last match-up, but even that’s deceiving - in the December match, Bayern dominated in possession, shots, corners won, and several other categories - it was mainly a great game from Neuer and a few mistakes by Breno and Gomez that cost us the game.

Meanwhile, Hannover is at home this weekend to take on ‘Gladbach.  The Foals sit at the bottom of the Bundesliga table, but are now tied for that spot with St. Pauli after stunning Dortmund last week.  ‘Gladbach is still within possible touching distance of safety, so they have a lot to play for, and they’ve won 2 of their past 3. 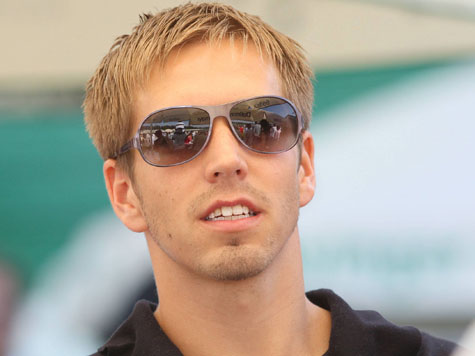 How about a little effort this week, Captain Stand-Around?

In two weeks, Bayern is on the road to take on lowly St. Pauli.  As mentioned above, the Pirates now share last place with ‘Gladbach.  But St. Pauli is moving in the opposite direction, winless since mid-February and coming off a thumping at the hands of Werder B.  This is one we should win.  If not, the Europa League beckons - and deservedly so.

On that same date, Hannover is at VfB Stuttgart.  Mark this one on your calendars; I have a hunch our dreams of fighting for the Champions League trophy at the Allianz next year might be bolstered or dashed right here.  Stuttgart is stuck in the bottom half of the table.  They do, however, have a respectable goal differential, and are coming off back-to-back solid wins over good clubs.  They currently sit 4 points above the last relegation spot (occupied by Wolfburg), meaning they will probably still have something big to play for by the time this one rolls around.  I’m not saying they’re a better club than H96, but I think they’re somewhat close on talent.  Combined with the home-field advantage and a chance to clinch Bundesliga survival, there’s a decent chance Stuttgart could at least scratch out a draw here.

Summary: the most favorable week for Bayern.  We play a weaker opponent that’s in especially poor form, while Hannover plays a somewhat tougher foe that’s been playing well and scoring goals lately.  Hopefully we wake up on May 8 feeling much better about our chances.

Bayern is at home vs. the afore-mentioned VfB Stuttgart.  I just described why I think they’re a dangerous opponent, so I’ll just point out one more thing: Stuttgart is yet another team that goes by the nickname “Die Roten.”  For God’s sake, something has to be done about this.

Same date, same time is the Hannover vs. Nurnberg match.  This one will probably come down to what the standings say before the game starts: Nurnberg is currently within touching distance of a Europa League spot (2 points behind Mainz for fifth).  If they’re still alive for that spot, expect Nurnberg to go all-out and hopefully come up with at least a point.  If they have no chance at European competition, though, a motivated Hannover team is probably too much for a Nurnberg team that’s just playing out the string.

Summary: also an unpredictable week, because both Bayern’s and Hannover’s opponents could be in desperate need of points by this date, or one or both could be down to a “who cares, just don’t get hurt” situation.  I will say this: if we still trail H96 coming into this date, I won’t feel super confident.

If I missed something or you disagree, let me hear it in the comments.  We’ll be back tomorrow or Friday to unpack some of the ongoing transfer rumors and to preview the Bayern vs. Schalke match.  As always, subscribe to our twitter feed at http://twitter.com/bayern_offside if you want to be notified of new posts, and feel free to e-mail any questions or complaints to bayern.offside@yahoo.com.  Thanks for reading.