With Hannover’s win over SC Freiburg last night, Bayern finds ourselves (momentarily) back in fourth place. Our game in hand arrives tomorrow morning, with only a win over lowly Frankfurt enough to put us back into the final Champions League spot.

Most of the week has been spent on reveling in Louis van Gall’s absence and the crushing win over Leverkusen. And it’s true, if we play that way again we should cruise to a third-place finish. But dropping points tomorrow would put us right back where we were, needing to watch other team’s scores rather than controlling our own destiny.

Last week, despite a heavy dose of injuries and suspensions, interim coach Andries Jonker seemingly hit upon a good line-up.  Gustavo and van Buyten took the CB places, with Pranjic at LB being replaced fairly early by Contento.  Lahm, of course, held down the right corner admirably.  But the interesting part came up front - Gomez still started at the front of the formation, but with Robben out, Klose started in more of a deep-lying attacking middie role.

With Robben still serving his suspension, Jonker will probably run this same formation again (ESPN suggests that he will).  Keep in mind, though, that Kroos and Badstuber are both available.  So those two could start (or else be ready off the bench), either Pranjic or Contento could start at LB, and any number of other possible wrinkles could be thrown in.

Frankfurt sites in 15th place, perilously close to the drop zone.  They’ve scored the fewest goals in the Bundesliga so far this season - 29, an average of less than 1 per match, and substantially less than half of what Bayern has scored.  Frankfurt will also be missing starting CB Maik Franz (is that pronounced like “Mike?”), which could open things up in front of their goal.  This is in addition to the long-term injury to their Brazilian captain, Chris, which threatens to derail his career.

But, the Eagles have a decent defense, allowing only 40 goals on the season (one fewer than Bayern, and much less than most of the teams around them in the table).  They apparently switched goalies in February, and new keeper Ralf Fahrmann is a veteran of the Schalke youth system and the German U-21 team.  In short, if they want to go all-out defense, Frankfurt would have the ability to make it tough on Bayern to score.  Last week, Bayern and Leverkusen both really wanted a win, and the result was free-flowing football with a lot of open spaces to pass into.  As we saw, this worked to Bayern’s favor.  I’m concerned that Frankfurt will go into the game hoping to just pick up a single point, in which case chances are going to be few and far between.

I have a hunch this is going to be a more difficult game than it appears.  I’m not saying Bayern won’t win, but I think it’s going to be a close contest.  This one is not on ESPN 3, but will be carried live on Gol TV.  So set your alarms and check back in tomorrow before 9:30, we should have a Match Day post up with last minute updates, etc.

A few items not related to tomorrow’s match:

- the Bayern Reserves were relegated from the 3. Bundesliga to the 4. Bundesliga.  Interestingly, next year’s coach for the reserve team is already decided: Andries Jonker.  Was anyone else aware of this?

- if you’re in the mood for a good laugh, check out this ridiculous article about Liverpool and Chelsea going after Philipp Lahm.

- finally, as I mentioned earlier in the week, we now have a twitter account.  You can find us at twitter.com/bayern_offside.  But, what we don’t have yet is a logo for our twitter page.

Given the restrictions (size, shape, copyright, etc), I narrowed it down to the following choices.  Let me know what you think, either in the comments or via e-mail at bayern.offside@yahoo.com.  If you don’t like any of these, we’d love to hear some more options. 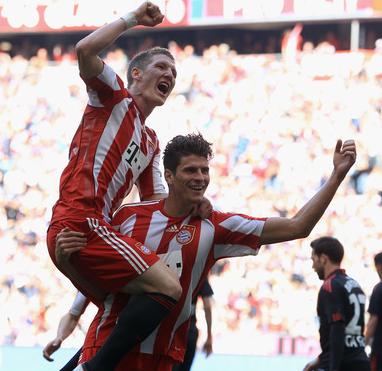 This ^ is a great pic, and accessible via our pictures account (and therefore doesn’t present legal problems), but I don’t know if the bright background would make it hard to see? 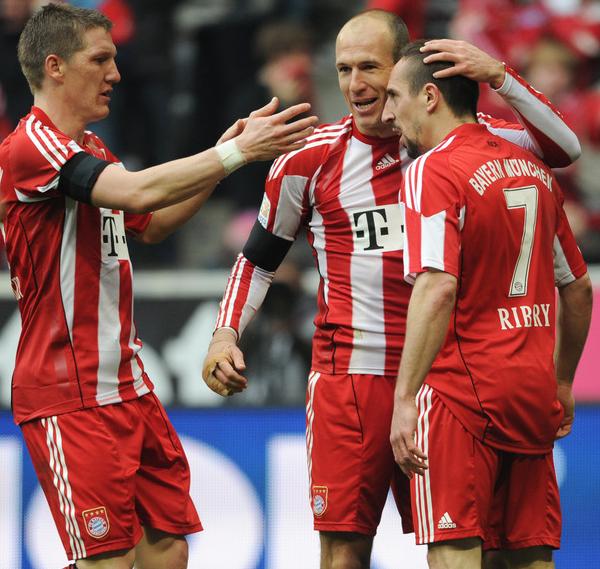 This ^ is the standard FC Bayern logo, with colors (blue, red and white) swapped.  Will that be enough to ward off a copyright violation?  Well, you’ll have to stay tuned and find out.  Thanks for reading.