The Clouds Lift for FC Bayern

Share All sharing options for: The Clouds Lift for FC Bayern

Given the many variables in play for every game and every season - the skill and form of the players, the strength of the opponents, injuries, and even luck - it would be wrong to blame one factor for a team with world-class talent having a sub-par year. Throughout most of 2010-2011, Bayern Munich has failed to live up to the heights of last season, and there are obviously several reasons for that. So it would be wrong to say that recently-ousted manager Louis van Gaal was the sole cause of our struggles in the past few months, and we have to keep in mind that we still have a ways to go before we’re winning trophies again.

Having said that … man, Sunday’s game was a breath of fresh air. It was great to see the club playing smart football, cashing in on scoring chances, and basically playing like we know they’re capable of playing. In fact, I’d say this game provided at least 4 reasons why Bayern fans should feel good going into the final month of this season and the summer transfer period: 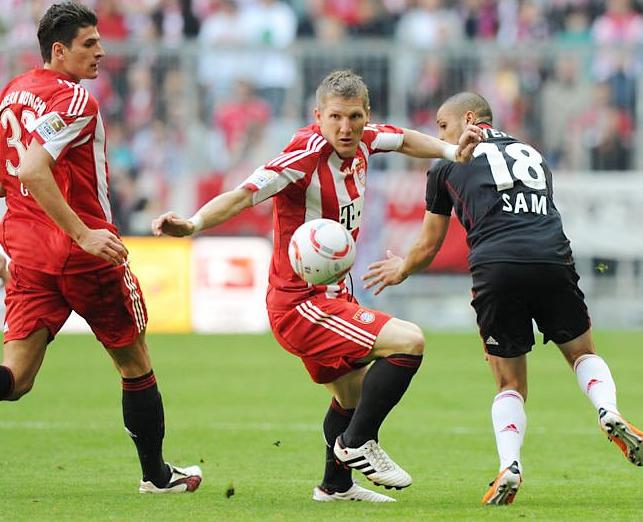 As we discussed all week, these two were listed as “doubtful” with injuries.  Turns out, not only did they play, but they played very well - Bastian setting up our first goal and Ribery making several good runs, culminating in a goal in the second half.  And I thought they were both moving pretty well - Bastian was subbed in the 81st minute, but his ankle didn’t appear to be giving him too much trouble.  Most importantly, they both appeared locked-in mentally, and are clearly 100% committed to the club, especially with LvG out.

Mario Gomez scored Bayern’s second goal, but the hard work was all Muller.  As that play took shape (towards the right corner), it would have been easy to say “Leverkusen has two guys closing in on the ball, I’ll just get back and help defend,” but Muller kept pressing ahead and wouldn’t give up on the play.  He eventually forced a mistake by Levekusen’s Arturo Vidal, quickly pounced on the ball, and sent it over to Gomez for the finish.  I’d been a little disappointed in Muller throughout some parts of this season, but he appears to be regaining his best form.  And because he’s versatile enough to play a few positions, we know he’ll have a place in any starting line-up next year, regardless of who else is brought in.

This one probably has less long-term importance, because I doubt he’ll be starting at CB for us next year.  But man, I thought the Big Belgian looked pretty lively out there, no?  There was a play in the first half when Gustavo missed on a steal attempt and Leverkusen had a 3-on-2, and DvB sprinted to the wing and executed a perfect sliding tackle to shut down the attack.  I hadn’t seen him make an athletic play like that in a while.  If nothing else, it will be useful to have him for the last 4 games.  And who knows, maybe we’ll keep him as a back-up/insurance policy next year.

(4) The whole team’s mentality and attitude

The announcers were quick to point out that no one considered LvG to be responsible for every bad thing that’s happened this year.  Even so, I think the squad played like a weight had been lifted from their shoulders.  Part of that might be due to tactical or organizational problems of LvG himself, but it’s also just a hard situation playing for a sacked coach who (for some reason) hasn’t been shown the door yet.  It seems like everyone’s role is now a little more clear, and the goal for the rest of the season is pretty well-defined.  We have 4 games left.  If we win them all, we’re automatically in the Champions League.  If we win 3 of 4, we’ll have a pretty good chance, especially if we can at least pick up a draw in the one we don’t win.

Speaking of which, Hannover has a Thursday night game this week.  They’re at SC Freiburg, a pretty tough place to play.  If the Freis can beat them, or even hold them to a draw, Bayern’s path to a top 3 finish is even more open.  Not that we should have to rely on the Hannover-Freiburg game at this point; but, if you don’t have anything else to do on Thursday, might as well tune in and root against Hannover.  Also, did you know that (according to Wikipedia) Hannover’s nickname is also “Die Roten?” What the fuck is that?

We’ll be back tomorrow or Wednesday with our weekly number-crunching, plus maybe something a little more light-hearted.  Thanks for reading.