Thanks to the FC Bayern e-mail newsletter and some of my alert readers, we’ve started to piece together some details as to Bayern’s starting line-up for Sunday. And let me tell you, it is not pretty.

First, a run-down of players that are out or questionable with injuries - as always, correct me in the comments if I forget something:

- Robben - out 2 games due to his suspension

- Badstuber - out for this game after picking up his 5th yellow card (or “yellow barrier,” as the Babel-fish translation of the FC Bayern newsletter calls it).

- Bastian - doubtful with an ankle injury

- Pranjic - questionable due to injury, might have given way to Contento even if he was healthy

- van Buyten - still nursing an injury, but today’s news is a little more promising: he says he “hopeful” that he’ll be able to play

- Ribery - questionable after picking up a “muscular problem" (??) in training yesterday

So, basically, a lot of guys who haven’t played recently will be getting some burn.  Let’s take a look at the possible line-up by layer. 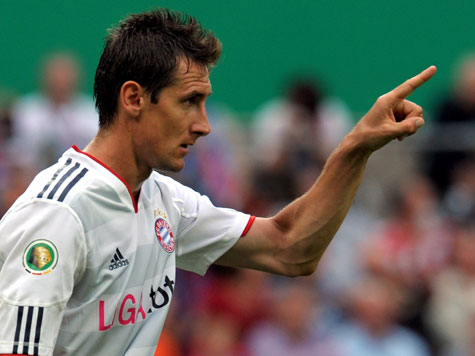 I think he's got one last blast in the tank

As we discussed yesterday, Butt figures to get the start.  We could talk about the goalie situation forever, but for this particular game, that’s what Jonker appears to be doing.  Welcome back, HJB.  This might be your last month of playing ball with Bayern, so make it one to remember

Lahm is the only sure thing.  In fact, I could probably just copy this sentence and paste it at the top of every post I make for the next few years.
Contento will probably get the start at LB, but if Pranjic heals up by Sunday, he could at least provide a possible option off the bench (and keep in mind he can play full-back and wing, and actually has had a few good runs over the past 2 games).

If DvB is healthy, I expect (hope?) he gets the start over Breno.  So our CBs will probably be Gustavo-DvB or Gustavo-Breno.  If DvB can’t go AND one of these two gets hurt or red-carded, we got real problems.  Bayern Munich II actually has a few good defenders - is Christian Saba still on their roster?

The official newsletter says Tymo is in line for a start at CDM.  This means he will probably start next to Kroos, basically just sliding right into the Bastian spot.

But, there are two other possibilities: he could either play at CDM by himself, with 5 guys (rather than our usual 4) being sent on as forwards/wings.  Or, if DvB is healthy, Gustavo could come up in the other CDM spot and Kroos could move forward.  Keep in mind Kroos has played wing/attacking middie in the past and looked good.

We played without Robben and Ribery for a while earlier this year, and man, did we suck.  But, we still do have a good deal of talent at the front, and I don’t think all is lost.  Klose will probably get a start, either in place of Gomez or next to him.  Like Butt, this could be either his chance to show he still belongs, or his chance to go out on a high note (and maybe show other teams he’s still got something left in the tank).

Muller will figure in somewhere, as will Kroos if he’s not staying back at CDM.  Altintop is usually the first on in place of Robben or Ribery, and with both of them out, Hamit will probably be needed.

Basically, there are about 6 or 8 different options for line-ups, all of which depend on last minute fitness issues.  But here’s my guess

I’m sure we can point out a number of reasons why this line-up would not work, I’m just throwing out my ideas.  Feel free to pick it apart in the comments.

Last point - this has been a crazy week with injuries, the coaching change, facing next year’s manager, the pain of dropping points last week, and all the rest.  But I’m actually really excited for this match.  This is a HUGE game for both teams (keep in mind Bayer Levs is only 5 points off the lead) and the Heynckes angle makes it ever cooler.  Obviously you want to have all your guys ready for a big game, but our roster is deep and we can’t make excuses.  We used van Gaal as an excuse for the past few months - well, he’s gone and can’t be blamed for any more poor performances.

I don’t know why, but I have a good feeling about this game.  I think Muller and Klose are going to show up.  We’ll be back tonight or tomorrow with any final thoughts, and to throw out a new post we can use as a Match Day Thread - anyone feel like discussing as we watch?  Thanks for reading.