In a surprisingly non-surprising turn of events, FC Bayern heads into our most important game of the season with a new coach and without two of our best players. Andries Jonker goes into his first game as care-taker coach with several very important decisions to make, specifically:

According to goal.com, the answer is Hans-Jorg Butt.  As we discussed earlier in the week, Uli Hoeness was very critical of van Gaal’s decision to stick with Kraft in goal at all costs.  At the time, I didn’t take this to mean that Kraft would necessarily be removed - Jonker makes the final decision on line-ups.  And anyway, as reader hvorfor points out, Uli’s statement shouldn’t be taken to mean that he thinks Hans-J is a better ‘keeper.  It was perhaps more a criticism of van Gaal’s intransigence in using Kraft for every game and refusing to rotate his players in general.

Anyway, if the article is to be believed, Butt is “widely expected” to start against Leverkusen.  Honestly, I’m not sure I’m convinced.  We’ll be following this tonight and tomorrow, and may update as necessary.

(2) Who starts in midfield?

[UPDATE - good thing I'm subscribed to the FC Bayern fan mailing list.  Today's e-mail says (from what I can translate) that "Tymoschuk is back in his favorite position!" - this being CDM, as we speculated below.  The FC Bayern newsletter also says that DvB, Pranjic, and Schweinsteiger are "questionable" - so the rest of this post is hereby out of date.  We'll be back with more tonight or tomorrow, but for now, if the questionable guys are out, our line-up would look like this:

A lot of changes, but still a talented group that should be able to take Leverkusen, especially at home.]

With Bastian Schweinsteiger nursing an ankle injury, a gaping hole opens up in the middle of the Bayern line-up.  There are two options here: either plug someone in to the Bastian spot (CDM, next to Kroos) and hope the replacement can perform, or scrap the formation and go with something entirely new. 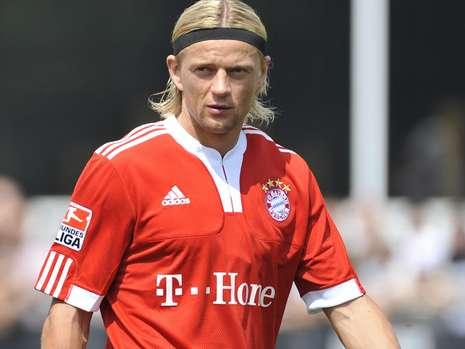 Ready for a start?

If the first option is chosen, I think Tymoschuk would start at CDM.  He’d arguable be playing out of position, but he would probably do alright.  With Tymo and Kroos at midfield, the club would still have some amount of speed and passing from that spot, and should have enough stopping power to prevent Leverkusen from continually making threatening runs and creating scoring chances.  Of course, how many times have we said that this year?

[UPDATE: our readers say that Holger Badstuber is out, too.  Great.  So, figure Breno in at CB, and in my possible 4-1-3-2 below, substitute "Breno" for "Badstuber."]

The other option would be to re-calibrate the line-up into something like a 4-1-3-2, with Kroos as the lone CDM.  This is more of a gamble, because Kroos is not a killer defensive presence, so more pressure would be put on our defense.  But such a plan could look something like this:

Not the most balanced line-up, but it might be the best way to take advantage of the people we have available.  Keep in mind Miro has looked pretty good in the time he’s had recently.

Anyway, I’m just throwing out ideas here, it’s entirely unclear who’s going to start.  Who knows, maybe Bastian will fix himself up over the next two days - the article describes him only as “doubtful”

(3) Who starts in place of the suspended Arjen Robben?

(4) Who is going to provide the firepower for Bayern?

I don’t think last week’s performance from Gomez left anyone full of confidence, and Robben’s absence will leave us without a certain amount of threatening energy.  If we’re going to consistently create chances, I think Muller and Ribery are going to have to take control.  Ribery has looked inconsistent in recent weeks - he’ll have a great run where he still looks like one of the best forwards in the world (like his goal vs. Freiburg last month), and then he’ll disappear for long periods of time.  Muller had been quiet for a while until his goal last week, but I have a good feeling about him against Leverkusen for some reason.

Anyway, I’ve been as critical of van Gaal as anyone, but that excuse has left the room.  If the players were really so worn out and unmotivated under the old regime, they ought to be ready to roll on Sunday morning, especially at home vs. a good opponent, and with next year’s manager to impress.  A good weekend on ESPN 3, as they’re running the Hannover game on Saturday morning (very important for Bayern - see here) and then our game on Sunday morning.  We’ll probably be back later today to update this post, or possible put up a new one, as news trickles in.  Thanks for reading.