As late afternoon arrived in Munich, no apparent final decision on the fate of Louis van Gaal had been made. The Bayern coach spent Sunday afternoon in his office at the Sabener Strasse while the players did their typical light Sunday workout. It is customary for Van Gaal to remain off the training pitch for these Sunday sessions, but it didn’t make his absence any less ominous for the legions of fans expecting the ax to fall on his Bayern career at any moment.

While Mathias Sammer and Ralf Rangnick are widely reported as the two most prominent coaches currently available, neither appears set to step in this season. Similarly, it has now been widely reported Paul Breitner, (who found himself seated with upper management in Hannover) is not a candidate in the short term.

Update: Süddeutsche Zeitung conjectures that assistant coach Andries Jonker is the leading candidate to take on the role of caretaker coach. It went on to name Jupp Heynckes as his possible long-term replacement in the coming season. Heynckes’ contract with Bayer Leverkusen expires at the end of the season.

As reported by the sources close to the scene, there appear to be two coaching alternatives most prominent in the discussion. The first is is he of the incredibly large cranium, ex-Hamburg coach Martin Jol. Jol spent one season of his playing career at Bayern Munich, in 1978-79. He resigned his most recent post at Ajax in December. The second would involved a co-trainer model with amateur coach Hermann Gerland and ex-Bayern star Mehmet Scholl. Scholl coach the amateur team last season before leaving to pursue his coaching license and various media opportunities.

Politically speaking, the 2nd alternative is far superior. Gerland is well-loved among the Munich faithful, while Scholl has earned his reputation as a Bayern legend on the pitch. Frankly, I don’t see what Jol brings to the table that is different from a lot of other vanilla candidates. In this situation, I think you do want someone who’s been in the Bundesliga trenches so to speak, and Jol can claim only one season on that score. I’ve always been a little suspicious of these co-trainer arrangements, but if the club is going that route, they’ve probably come up with the best possible short-notice pairing.

But just in case management is having cold feet, I’ve decided to use my blackmail material. So here’s Louis van Gaal cozying up with a tranny. 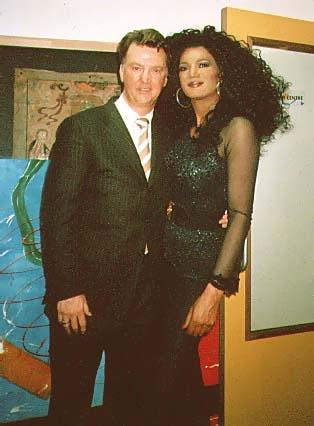 There, that ought to do it! Oh, who am I kidding. The only place narrow-minded enough to dump Louis van Gaal over that photo is the U.S. Congress…

More to come as the situation unfolds, but there are no press conferences scheduled for Sunday evening, and we don’t expect any official announcements until Monday at the earliest.