The international break always gives agents, newspapers, bloggers and other hangers-on a chance to stir up some a few rumors about player movement. This week has been no exception, as Bayern-related stories from the mundane to the fantastical have been floating around the globe. Join us as we sift through the news feed and try to figure out whether anyone we recognize will be playing at Allianz Arena next season.

For each rumor, we’ve appended both the likelihood of the event/transfer taking place, and the degree of improvement that would theoretically be brought to the club if it were to occur.  Both are calculated on a scale of 1 to 10, with 1 being least likely to happen, or a disaster for the club, and 10 being certain to happen, or a great move that would put us on track to win trophies.  And in both cases, 5 would be considered average / neutral / right in the middle.  And we’re off …

As we mentioned on Tuesday night, goal.com is reporting this as a near certainty.  No one has been able to independently confirm a deal in principle, though, so don’t start celebrating yet.  Coentrao is a talented young player who combines speed and stamina with pretty good technique.  If we had Coentrao at LB and Lahm at RB, our back-corners would be the most solid in the world.  The only negative I see is that we’d be spending a lot of money (transfer fee rumored at 25 million Euros) and not solving our biggest deficiency, which was opposing offenses charging right through our middle.  But if Coentrao is brought in and combined with improvements at CB and/or CM, this could be a move we’ll be celebrating for years.

The Schalke and Germany ‘keeper has been on the radar for months, but a report today from FansFC describes Bayern as “the favourites” to land Neuer.  FansFC has a .com and not a .co.uk URL, so I don’t know where the U in “favourites” comes from, but I guess that’s not my business.  Neuer is arguably the world’s best keeper in the 25-and-under set, and has enough years under his belt to prove it’s not a fluke.  He’s also played with Bastian, Muller, Lahm, etc. on the national team, and they seem to work well together.  The Improvement factor can’t be more than an 8, though, out of respect to Kraft, who’s done a pretty good job. 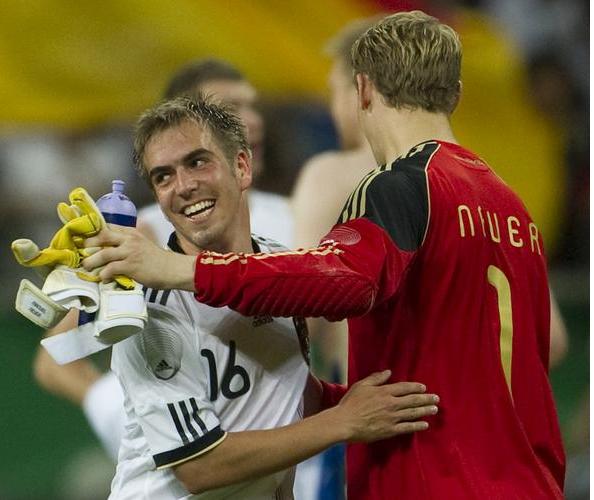 Apparently, they already know each other

Improvement: 8 - Check out this analysis if you don’t agree, especially the last 3 paragraphs.

Shit, now they’ve got me doing it.

With David Luiz playing so well for Chelsea in the past few months, and John Terry and Ivanovic set to return, the Brazilian may find himself the odd man out.  Alex is a big, strong guy with decent technique, and he’s good on free kicks.  But he has a troubling injury history, and it’s been over two years since he was a regular starter for Chelsea.  Even if he can say healthy, we’re basically looking at a slightly-less-stiff Daniel van Buyten.  And depending on how Badstuber looks this summer, Alex could be lining up next to the real Daniel van Buyten.  One decent factor is that the transfer fee, according to SportinGo, is said to be a reasonable 10 million pounds (like 13 million Euros or so? Correct me if I’m wrong).

Likelihood: 5 - I could see it happening, I could also see it being one of those things that people just make up.

Improvement: 5 - I don’t see why WE didn’t just get David Luiz, instead of settling for their dross

No longer a rumor, it was just confirmed by ESPN’s soccernet a few minutes ago.  I kind of like him, although I know a lot of my readers do not.  I guess we’re set at CM with Bastian and Kroos.

Criscito is a versatile defender currently playing LB for Genoa, but who has looked good at CB at various points in his career.  I’ve seen him play a few times, and he seems to have a great combination of footwork/technique and aggressiveness.  He’s a little unproven, but I think he’s talented enough to be a regular starter at Bayern.  Plus, if he can truly play CB or LB, it gives us a degree of flexibility that we’ve been lacking all year. 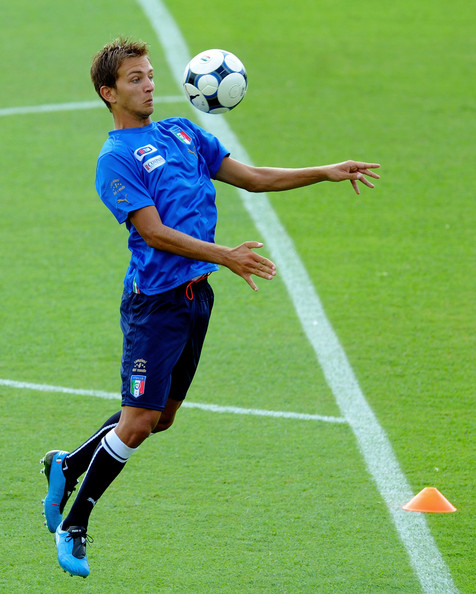 Plenty of room on the Criscito Bandwagon, if anyone wants to join me ...

Likelihood: 2 - The only recent mention I can find is an article from Gazetta de Sport, which lists Bayern as among the clubs interested (along with Inter).

Improvement: 7 - I think he could end up being nearly as good as Coentrao, at a smaller price and with the ability to play more positions.

This looks like it will happen.  Miro has had a great career, and I think he still has something in the tank. Unfortunately for him, Gomez has rounded into shape as a world-class striker this year.  With the way Olic was tearing up the Champions League last year, the board seems to think Klose is the odd man out (especially since his contract expires after this season, meaning they’d have to extend a new offer just to keep him).  I do think Klose could still be effective if he stays, which could happen if some other crazy things occur (see below).

Improvement: 3 - Certainly not a positive improvement, but the damage is mitigated by the fact that we have better options at striker and he hadn’t been playing much for us lately anyway.

This took me by surprise.  Of course, there are always weird stories that people just make up, but a few news outlets are reporting that clubs have been making offers for Gomez, Napoli and Newcastle among them.  It took Mario a while to seize that starting striker spot, but I think he’s played very well this year.  Sure, anyone will have a lot of chances with the wings and midfielders that Bayern has put together, but we still lead the Bundesliga in goals scored.  Why tinker with that?  Is it possible that Uli and/or Heynckes is really that excited about Olic?  Are we set to move Muller to the front of the formation?  I’m hoping this is just agents and journalists blowing smoke.

Improvement: 2 - Without some plan to replace him, this move makes no sense to me.

No, we didn’t see this.  Keep moving.

I don’t really know much about this kid, but it’s reported by Inside Futbol, which does sometimes get things right, so I thought I’d pass it along.  He’s French, 22 years old, and a midfielder.  If you know anything more about him, by all means clue me in.

Likelihood: 2 - Bayern is one of several teams said to be interested, and the new deal for Kroos probably makes this a non-starter.

Improvement: ? - Like I said, I know very little about him

There are several more rumors flying around, but I’m now over 1,200 words, which appears to be everyone’s limit.  Tune in tomorrow for updates, and a preview of Saturday’s match vs. lowly ‘Gladbach.  Also, the Bayern Offside Facebook page currently has 98 “Likes” - any way I could get two of you to take us into 3-digit territory?  Thanks for reading.