Bayern is finalizing a deal to bring in Fabio Coentrao from Benfica, according to an article on Goal.com. The headline reads "Benfica's Fabio Coentrao to Get Five-Year Deal at Bayern Munich," in rather certain-sounding fashion. However, the first sentence qualifies the statement a bit, saying that the defender "is looking increasingly likely" to come aboard.

So, the deal sounds close to done, but don't be totally shocked if it breaks down at the last minute. Chelsea, Liverpool and Manchester City had all expressed an interest.  For what it's worth, no other source (including me) can independently confirm the deal.  Coentrao himself can't go anywhere until the summer, obviously, but I'm at least hoping that a "deal in principle" will be reached, as they say in the NFL.  If the article is correct, the transfer fee will run at about 25 million Euros.  This is a ton of money, but it's worth considering that (1) Benfica wanted 30 mil last year, and (2) he's one of most dynamic defenders in the world, and just turned 23 years old a few weeks ago. 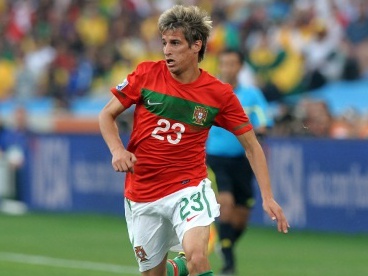 Welcome aboard. I think.

If true, the positives are numerous: in addition to the simple fact that he's really good, this allows Lahm to stay at RB.  Additionally, this signals to other players (both possible transfer targets and current Bayernians who might be worried) that we're committed to winning and ready to do whatever it takes.

Possible negatives?  It doesn't really help our CB problem (everything I've read puts Coentrao at LB, not center). It could conceivably burn money we'd use at other positions. But these are minor points - for now, I'm going to keep checking to see if any other source will confirm the deal.  If so, a good day for us.  We'll have more tomorrow, or possible tonight (it's 8:30 PM Eastern, USA time, right now).  Thanks for reading.