Louis van Gaal Has Not Eaten My Brain…Yet

Share All sharing options for: Louis van Gaal Has Not Eaten My Brain…Yet 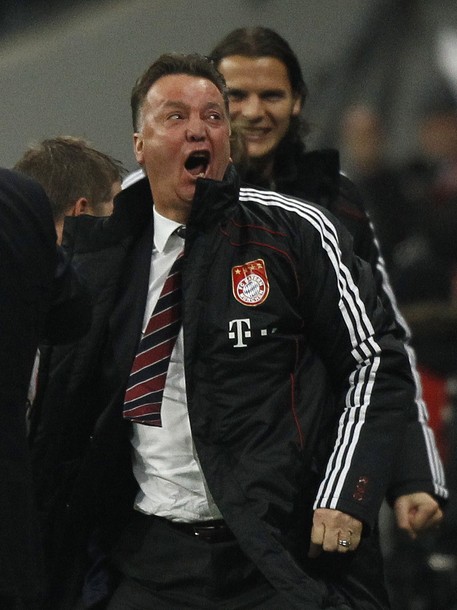 Louis van Gaal is in the crosshairs of many a Bayern fan after a second consecutive home loss in the DFB-Pokal semi-final on Wednesday. Once again, the team looked like it was unable to cope with performing simple defensive tasks, finding the open man from a double team on the flank and building up any sort of attack in the middle of the field.

But I’m going to voice the unpopular opinion that Louis van Gaal has been pretty unlucky the last few days. And I think management is doing the right thing by standing behind him at the moment. On Saturday, he was beaten by a team that is more talented than his at the moment, man for man. There’s no shame in not being able to coach your way out of that. And on Wednesday, he was beaten by an excellent keeper on a team that has always played his teams closely, even when Bayern has been in their sharpest form.

The thing about luck is, there isn’t a lot you can do about it. It’s become a popular revisionist thought that Van Gaal was “lucky” in the Champions League last season. It’s a tremendously silly argument, because it implies that Bayern’s run to the final wasn’t Van Gaal’s doing at all, and if Jürgen Klinsmann had just gotten “good luck” against Barcelona, he would have made it to the final in 2009 with a team that had a much better showing in the group stage than Van Gaal’s team last year. And if you want to argue luck, if good luck exists independent of Van Gaal, doesn’t bad luck occur in a similarly independent fashion? Shouldn’t we feel sympathy for Van Gaal for acquiring such bad luck?

So no, I’m not prepared to say that it’s Louis van Gaal’s fault that Bastian Schweinsteiger can’t defend a corner or that Franck Ribery thinks Manuel Neuer can be beaten with sloth. You’re seeing basic mistakes and errors in judgment from players who are not new to the system, and with the entire squad healthy, are not compensating for some missing teammate. Schweinsteiger in particular has been even worse since moving to his desired spot in the CDM.

What I am prepared to say is that Louis van Gaal isn’t the best evaluator of talent. If he was, he would have known that he didn’t have 3/4 of the players necessary on his back line to implement his tactics before the season started. And as much as fans want to harp on the center backs, I wouldn’t fault Van Gaal at all if he thought he was going to go with Breno and Badstuber, and he could “get by” with the others for the first half of the season. But even those two have been wildly inconsistent. The worst mistake in judgment was at left back. Because to go from thinking you had a starter in Diego Contento to not even putting him in the squad when healthy is a radical move usually reserved for the Christian Lells of the world. My beefs with Van Gaal are more what he didn’t do before this season rather than what he has done during it. It’s the cause of so many makeshift solutions he’s had to try.

The Problem With Retro

Still, I can hear the voices of so many fans and readers calling out-let’s bring Ottmar Hitzfeld back to help us! I’ve grown so tired of hearing that one that I feel compelled to make the following point:

Really now? Despite the face that it would never happen, this idea forgets the last time Bayern tried it. Are fans’ memories really so short? Here was Hitzfeld’s debut on February 2, 2007, following the firing of Felix Magath:

Bayern went on to lose to the likes of Alemannia Aachen and Eintracht Frankfurt in the weeks that followed and finished the season in exactly the same spot in the standings as when Magath was fired. It’s a very “Kingdom of the Crystal Skull was great!” argument.

As a Bayern supporter, I was not particularly embarrassed by the Südkurve sign campaign against Manuel Neuer. These loyal fans pay for their seats every other week, and to me that’s enough to give them the right to self-expression. It does however, bring the thought to mind that it doesn’t take a whole lot of intelligence to hold up a sign. It was a display completely lacking in vision and cleverness that did nothing to support their own players. In their desperation to express themselves to management, the Südkurve fans ended up displaying the same qualities they so frequently criticize in management. Beyond that, I completely disagree with them. Thomas Kraft fits with a young, developing team, not a team that is built to win now, and realistically, that’s where Bayern is at. This is one of the more veteran teams in the league (3rd oldest in fact). Bayern would do themselves more good than harm with a veteran keeper who has been tested at the highest levels, and the opportunities to acquire one are rare indeed. The reaction of Bayern management to the show of dislike for Neuer should tell you all you need to know about where they stand on the subject.

Finally, the Inter match will have little to do with Van Gaal’s fate. Everyone with a voice in the decision about a coach has publicly repeated with rhythmic regularity that the team’s goal has to be to qualify for the Champions League. In each of the last 2 in-season coach firings, management acted with the justification that qualification for the Champions League was threatened. The Hannover match is of much greater importance than the Inter match. If Bayern should lose, they would be 5 points out of 3rd place, and possibly in 5th place with 9 matches remaining. At that point, I’d have no choice but to join the raus crowd. But I’m not there yet..