I hope you enjoyed your dose of fashion talk and pretty, pretty pictures last week, because today we’re diving into the deep end of statistical analysis. Goal-keeping statistical analysis, to be precise. Climb aboard as we look at some figures and try to answer the question of whether Bayern really needs a new goal-keeper.

First, a disclaimer: numbers obviously can’t capture the entire story of a match or player.  A keeper might face 6 straight shots directly at his chest.  If you look at the numbers, you’d say “oooh, 6 straight saves!” but any competent keeper would have made those saves.  Similarly, the opposing team might only put 3 shots on target the entire game, but 2 may have been completely unsaveable even for the best goalkeeper in history (for instance, if the CB missed a tackle or took a bad angle, and the striker just had to tap the ball into an open net).  The numbers say your guy allowed 2 goals on only 3 chances, but really he didn’t play as badly as that ratio would suggest. 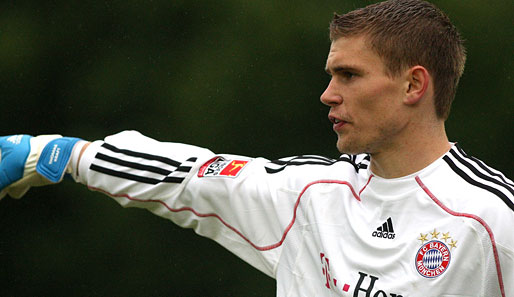 Kraft is good. Is he good enough?

But even with these disclaimers, I do think that goal-keeping statistics can be valuable over the course of a long season.  The degree of difficulty from one shot to the next may vary widely, but once you get to large sample sizes (anything over 10 games) I imagine the ratio of easy vs. somewhat hard vs. very hard saves is fairly similar across keepers.  With that in mind, we decided to look into some numbers from this season to answer the question posed above.  And (with numerous qualifications), we’re forced to conclude that the answer is “yes.”

First things first - I like Kraft.  I think he’s a good keeper and a hard-working young guy.  I like the fact that he came up through our youth club.  His penalty save in our last match vs. Freiburg may have saved our chances of playing Champions League ball next.  That said, let’s look at his numbers.

All the math is mine, so I apologize if I made a mistake.

As you can see, Kraft got only occasional duty until January, when he took over for good.  He had a couple really good games, and a few not so good ones.  The most-recent Inter game wasn’t his fault, although in a strict numerical sense, 3 goals on 3 shots on target is a clunker.  He’s allowed 3 goals on 3 other occasions, too.

Overall, Kraft has played 16 games this season, allowing 21 goals on 74 shots on goal.  This gives him a save percentage for on-target shots of about 71.6%.

If you count all shots faced, he did not allow a goal (either through a save or otherwise) on 181 of 202 shots faced, meaning about 89.6% of the time the opposing team cranked up a shot, they failed to score.

He also completely blanked the opposition on 5 occasions out of 16 games, giving him a clean-sheet percentage of about 31% (just under a third).

One of our main transfer targets is said to be Schalke keeper Manuel Neuer.  Although he just turned 25 yesterday, Neuer has a lot more experience, having been the regular starter at Schalke for 5 years already and the starting keeper for Germany this past World Cup, allowing only one goal throughout 3 group-stage games.

This season, as the starter since opening day, Neuer gives us more to work with:

Immediately jumping off the page is the Feb. 4 match vs. league leaders Dortmund, where Neuer faced 20 shots (8 of them on target) and stopped every one.

On the year, that’s 40 goals allowed out of 175 shots on target, for a save percentage of 77.1%.  If you consider all shots faced (not just shots on goal), Schalke’s opponents hit the back of the net on just 40 out of 481 total shots this year, meaning they failed to score on about 91.7% of all shots they took.

Neuer has refused to concede a single goal on 14 occasions this year (out of 38 matches played), giving him a clean-sheet percentage of about 36.8%

Just for the hell of it, let’s also take a look at Hugo Lloris, who was said to be a target of ours in late 2010.  This includes only games Lloris has played (twice, Lyon has gone with their back-up):

Lloris has played in 37 matches this year, permitting 38 goals out of 150 shots on goal faced.  This gives him a save percentage of about 74.6%.

Considering all shots faced, Lyon’s opponents have attempted 402 shots on Lloris and hit the back of the net 38 times, meaning about 90.5% of the times they shoot, they fail to score, whether saved or just off-target.

Lloris has completely blanked the opposition 12 times, giving him a clean-sheet ratio of about 32.4%.

When we compare the group, they look like this:

Note that these terms aren’t precise - the percentage of times the offense fails to score with any shot is not properly called the “save” percentage, because some of these fly high or wide and needn’t be saved.  But you get the idea.

I was surprised at how consistent the numbers are.  For each category - shots on goal saved, total shots kept out, and clean-sheet percentage - Neuer is the best, Lloris is right in the middle, and Kraft brings up the rear.  Of course, there could be numerous reasons for this - you could say Kraft hasn’t had enough time to get his legs under him, he might get better with more matches, etc.  But it’s also just as possible that Kraft might prove worse over more games.  We have to work with the numbers we have.

You could say that Bayern’s defenders have played poorly, contributing to Kraft’s lower numbers.  But neither Schalke nor Lyon has world-class defenders.  Schalke’s back line has been shuffled all year, and they’ve played the past few months with a couple of 22-year old no-names in front of Neuer.

Then, you have to ask: how big are these numerical differences?  In a sense, not very big (5 and a half percent between Neuer and Kraft on on-target save %) … but over a long season, that makes a big difference.  If a keeper faces about 180 shots on target over a course of a season, the difference between a pretty decent B or B+ level keeper and a truly world-class A level keeper might mean anywhere from 6 to 12 goals prevented.

This year, in all competitions, Bayern has had 16 games end in a loss or a draw.  Of the 10 losses, 5 have been by a single goal, and of the 6 draws, we gave up at least a goal in 3.  This means that, between scoring draws and 1-goal losses, there have been 8 matches in all competitions in which Bayern would have moved on/picked up more points if we had kept one more shot out of the net.  Obviously, not all of our hypothetical A-level keeper’s additional saves would have come in these matches, but it’s a good bet that at least 2 of them would have, and possibly 3 or 4.

In other words, in the context of our current season, the difference between a B+ keeper and an A keeper would render us still alive in the Pokal, or still alive in the Champions League, or currently in third place rather than fourth in the Bundeliga, or some combination of all of the above.  Which brings us to the sobering conclusion: this is one of the curses of supporting a truly world-class club with a rich history and high expectations like Bayern.  Most clubs can afford to say “hey, current player X came up through our system, he’s young, he’s a hard-worker.  Why should we spend more money and go outside our system just to get player Y who’s only a little better?”

Bayern doesn’t have that luxury.  Our goal is to challenge for silverware every single year - if not win each competition, then at least be one of the top 2 or 3 teams fighting for the Bundesliga and one of the last 4 teams contending for the Champions League title.  Unfortunately, this means you can’t stick with a solid, respectable home-grown option.  Teams that want to be considered the best in Europe have to upgrade where possible, especially when you have a chance to get a best-in-the-world option at that position.

Thomas - you’re a good kid.  I like watching you play.  I hope you go to a good team and have a successful career.  Right now, you’re a B to B+ player at a position where we need an A.

Sorry to make you guys sit through all the numbers.  Thanks for reading.