The Glove-Styles of the Rich and Famous

Share All sharing options for: The Glove-Styles of the Rich and Famous

Most parts of the Bayern players’ uniforms (or their "costumes," as my wife calls them) are strictly regimented. Shirts, shorts, the long socks that cover the shin-guards - obviously, everyone has to match at kick-off. The club as a whole might wear the classic red-and-white striped shirt one week and the nouveau navy blue the next, but on a given game day, the players all look identical. A bit more leeway is apparently given when it comes to the boots, and you will occasionally see Ribery or Robben with bright yellow footwear, but most players usually opt for standard black or black-and-red. And because the socks and shin guards are all the same, the effect of crazy boots is muted.

But there is one way that our Bavarian heroes can express a little individual style and stand out from the crowd: gloves. 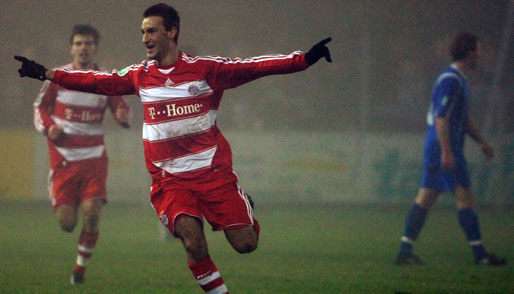 Didn't this guy play for Bayern at one time?

That’s right.  Today, we’re talking about players wearing gloves.  Outfield players, specifically, because there’s nothing remarkable about goalkeepers with gloves.  If you’re in the mood for a serious discussion of tactics and gameplay, check out yesterday’s post about Arjen Robben or wait until later this week.  Right now, we’re all about warm and fashionable hand-coverings.

With respect to glove-wearing, there are basically three types of Bayern players: those who wear them fairly often; those who have been spotted wearing them once or twice, but only rarely; and those who wouldn’t be caught dead in them.  That raises the question of why a footballer would ever need or want to wear gloves, especially when they’re wearing shorts and short-sleeves and running around for 45 minutes at a time.  Well, more on that in a bit.  For now, let’s break down the roster’s glove preferences in question-and-answer format, based on my entirely non-specific and mostly memory-based research.

Q: Which Bayern player is most likely to wear gloves?

A: Leaving out the keepers, of course, it appears that Robben is the most glove-friendly of Bayern’s regular starters.  His standard look is the red gloves with the Bayern logo on the back of the hand, as seen here: 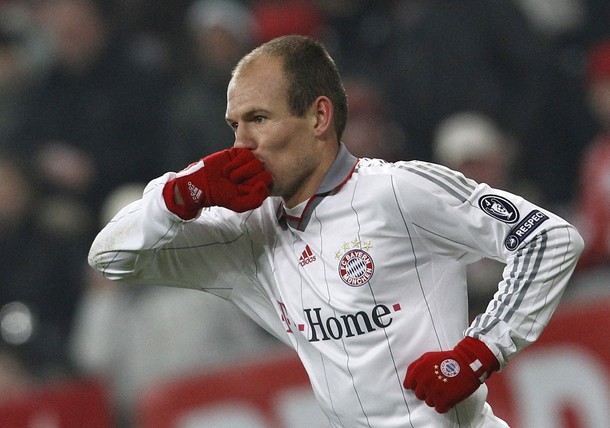 But he can also mix it up, as we saw earlier this season when he brought out the white gloves to match the white kit: 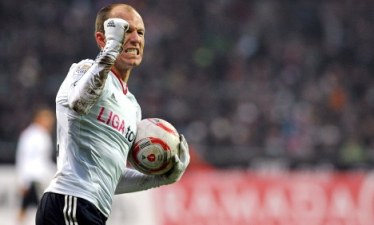 Q: Do the gloves always have the team logo?

A: No.  You can see the Adidas logo on the back of Robben’s white gloves above, or on the black Kroos gloves here: 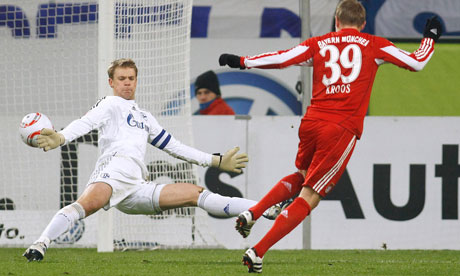 I don’t remember this ever happening

Q: So players would only want gloves when they’re also wearing long-sleeves, correct?

A: Incorrect.  We’ve seen the short-sleeves-and-gloves look on both Ribery and Scwheinsteiger: 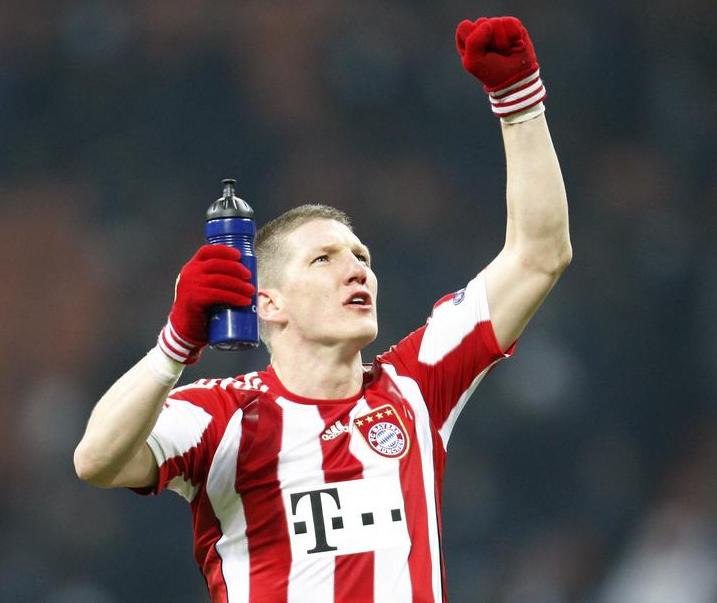 But that’s rare.  Usually, the gloves come out with the long-sleeved kits, and only when it’s cold enough to see your breath.

Q: I’m bored, and this topic disinterests me.

A: Well, you try writing a thousand words about a team that’s in the middle of the international break.  We all know where Bayern’s players are during the Euro-qualifier week, a new coach hasn’t been hired yet, and it’s over a week until the next Bundesliga match.  We’ll be back with something more serious later this week.

Q: So there are three glove possibilities: white, black, and red-with-Bayern-logo?

A: Well, not quite.  Adidas makes at least two models of the red-with-Bayern-logo gloves.  They make a pair with stripes on the cuff that are horizontal, running around the wrist like hoops.  You can see these on Bastian above, or on Ribery in this shot:

Then, they make a pair with cuff-stripes that run vertically - i.e., running the same length as the player’s arm.  Pretty Luca Toni will model those for you: 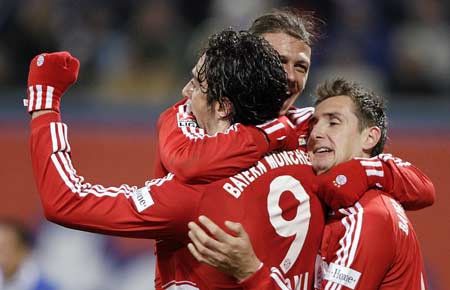 Q: Does Daniel van Buyten ever - 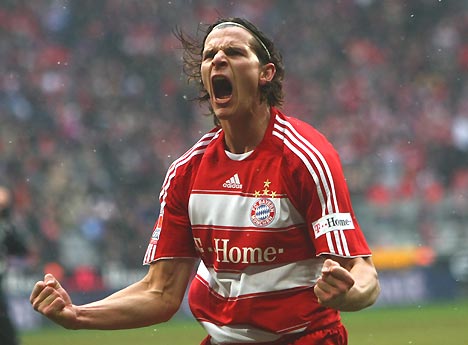 I will crush you with my bare hands

Q: But what if it was REALLY cold -

A: Seriously, look at this picture: 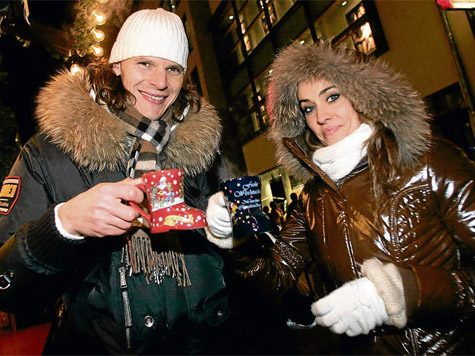 Daniel says, “I could go for a swim right about now”

He’s out with his woman at night in the middle of the Christmas season, they’re fully bundled up, winter coats, she even has her fur hood up - AND HE DOESN’T WANT GLOVES.

Q: So there are a few glove options.  But on a given game-day, do they players’ gloves at least have to match each other?

A: Apparently not.  Check out this shot: 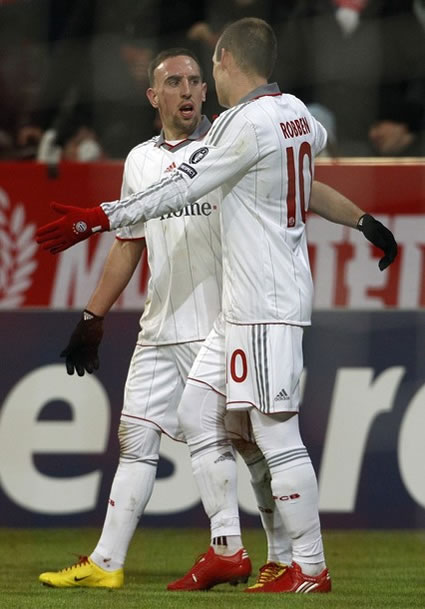 A few things to unpack here: first, they’re obviously permitted to wear different glove styles.  Second, they have also failed to coordinate sleeves and boots.  Third, Ribery has yellow Nike boots to go along with black Adidas gloves.  Is he contracting off the sponsorship of his body piece-meal?

Q: Wouldn’t a player expose himself to ridicule for wearing gloves to protect against the cold?

A: Oh yeah.  Legendary Marseille striker and Republic of Ireland international Tony Cascarino is one example of a guy who’s unimpressed by the gloved look, with the following to say about a Chelsea-Newcastle match he witnessed: “Chelsea 7 Newcastle 0. That’s the number of outfield players wearing gloves yesterday … Formerly hard men, are Chelsea trying to regain a reputation as southern softies?”  And journalist Mike Collett has a problem with both gloves and Tevez style neck-warmers, which I guess are called “snoods” in England.  Collett asks: “What next for pampered players - overcoats?”

Well, that’s a long shot.  But if it got cold enough that players had to don overcoats, we could be sure of three things:  Adidas would make them available in a number of styles.  The players would completely refuse to match overcoats with their teammates.  And Daniel van Buyten would never, ever wear one.  Thanks for reading.