The first time I saw Arjen Robben play in person, I was so amazed I spilled half a plastic cup of beer onto my lap. And that’s a problem, because those stadium beers ain’t cheap. Real Madrid traveled to the States in 2009 to take on DC United, and I was in attendance along with my girlfriend (now wife). Cristiano Ronaldo, Kaka, and Karim Benzema had just been signed, and the huge crowd, which was at least two-thirds Real Madrid fans, was eager to see these three. But, as it turned out, Benzema wasn’t travelling with the team, and CR and Kaka were overshadowed:

The first goal is Higuain (I believe), but the second two are all Arjen. He assists one with a speedy move to the ball followed by a perfect pass, and scores the last with a precise chip right over the keeper. I was only glibly familiar with Robben coming into the day, but he was all over the field - beating defenders, dropping perfect passes, and basically terrorizing DC United any time he touched the ball.

On the way out, the girl behind us asked "which one is Cristiano Ronaldo?" I told her, he was the one with the hair gel who got substituted early in the second half. She replied "Oh. Well, that bald guy is much better."

Part of being a sports fan is learning to live with being let down. Even the best teams can’t win it all every year, and even the greatest players have slumps. This propensity for disappointment is probably at its most acute when it comes to player acquisitions. When your favorite club picks up a new player, it’s easy to get excited about the possibilities: you think about how he’s going to fit in with the existing roster, you try to guess whether his skills will complement those of the other guys, you wonder if the addition will be enough to really improve the team.

But much of the time, it doesn’t pan out that way. Even if the new acquisition ends up performing well, there’s usually a learning period, where the new guy gets comfortable and the coaching staff figures out everyone’s role. At best, you hope the player lives up to expectations. But only very rarely will your club grab a great player, you come in with high hopes for his performance, and then he exceeds even those high hopes.

Which is what made Robben’s 2009-2010 season so magical. Bayern already had a great roster, but had limped to the finish line in the spring of 2009, and had been dumped out of the Champions League at the quarter-final stage at the hands of Barcelona (I was at a bar in Prague when we got dismantled on the first leg - more on that some other time). Robben was the one of the additions that was supposed to make us take us back to the top of the Bundesliga and make us competitive in the Champions League again. He was brought in late, not signing until the end of August, when the club had already played three matches in the Bundesliga. But he arrived with a flourish. 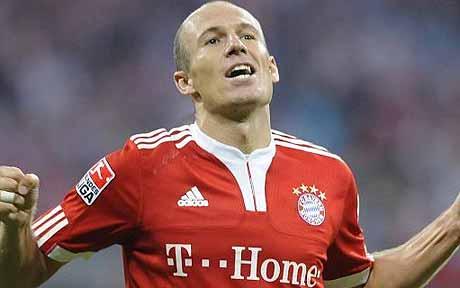 In his first match with Bayern, Robben came off the bench in the second half to notch two goals against defending champs Wolfsburg. He was in the starting line-up for the next match, and never looked back. Robben was big in Germany, scoring 16 goals in the Bundesliga and another 3 in the Pokal, but he saved his most electrifying magic for the bright lights of the Champions League. It was in four Champions League matches in the spring [EDIT: sorry, Robben played in three games of this four game stretch. Thanks to Made for the correction] - two against Fiorentina, and two against Manchester United - that Arjen demonstrated what made him so great: a nimble touch on the dribble; an amazing rapport with Bayern’s other forwards, especially Ribery; and a particular offensive tactic that, at its height, was practically unstoppable. In fact, let’s take a closer look at that.

For readers who’ve watched a lot of Bayern and Netherlands games, this is very familiar. Robben’s trademark move starts when he takes a pass in the right channel, headed upfield. In this situation, the goal is way ahead of him and off to the left, his teammates are arranged to his immediate left, all the way across the far side of the field, and ahead of him in the middle of the field (this was the Olic spot, when he was healthy):

As Robben moves into the attacking third, he is met by either the opponent’s wing-back or holding midfielder, or both. At this point, he slams on the brakes and draws the ball to towards the middle of the field:

One reason Robben can do this so effectively is that he can dribble in towards the middle either off the instep of his right (outside) foot, or off of the outer edge of his left (inside) foot. This makes it impossible to tell when he’s going to execute his stop-and-cut move, because he doesn’t need to wait until the ball rolls through the "correct" foot. Once the move is executed, Robben immediately looks to unleash a powerful shot if the defenders haven’t cut him off. He will either shoot directly off the first touch after the cut, or after a single dribble to set up the shot.

If the defenders take away that shot, Robben still has options: if the wing-back has dived in to stop the shot, he can dribble back to the right, either with a spin or with a dribble-drag. If the holding midfielder has charged in to cut off the shot, Robben can keep moving to the left while rolling back downfield. This opens up a number of passes, or he can then plant and head back upfield if the defenders are slow to regroup. Or, he can try to split the two defenders and charge directly at the goal, where he might run into some space to shoot, draw a foul in a dangerous area (if not a penalty), or draw more defenders and open up his teammates.

For a look at the finished product, start at 2:38 of this clip:

How it all comes together

This move is devastatingly effective, for two reasons. First, it’s very aggressive. Note that the first choice is always to shoot. With a hard, accurate shot that he can unload quickly, Robben gives the defenders no time to think. By the time his mark is thinking "he’s cutting - should I …" it’s already too late. If you want to take away the dangerous shot from range, you have to cut him off IMMEDIATELY after he makes the move to the inside.

The second advantage is that, depending on the opponent’s defense, this tactic can take advantage of a no-man’s land. As Robben moves upfield on the right flank, it’s the other team’s wing-back who is trying to mark him. But once he hits the brakes and pulls the ball to the inside, he’s moving into the territory of the center-back or the holding midfielder. This explains why this tactic was still so effective throughout last spring and summer, even when defenses knew about it: by the time the move starts to take shape, Robben has found an area of the field where he’s sort-of in the area of three different defenders. And everyone who’s played soccer knows that, when you have three guys who are sort-of marking you, you have no one who’s really marking you.

A far cry from where we find ourselves today, no? Injuries have been a big part of Bayern’s struggles thus far, and none were bigger than the injuries to Arjen. His Dutch witch-doctors got him cranked up on something that was juuuuust enough to get him through the World Cup. After that, he had to shut it down until January. Since he’s return, he has had a few good games, but nothing like the sustained dominance of last year. Most recently, he left last week’s match vs. Freiburg in the first half due to an undisclosed injury. Read Tomas suggests it might be a sports hernia, which would explain why he can seemingly look fine when he jogs but can’t effectively run and cut. Sports hernias often follow on the heels of rehabilitation of other injuries, so that’s not a bad guess.

But I don’t know if his injuries tell the whole story. Robben has also had to deal with shuffling line-ups around him, a tough schedule in which every opponent is now well aware of the danger he presents, and possibly some long-term fatigue (keep in mind all the minutes he logged with the Dutch, who went to all the way to the Final at the World Cup). And there’s also simply the fact that you can’t expect a guy to destroy every defense he faces for years and years. Lightning doesn’t usually strike twice. Last year was magical, but Robben can’t recreate that by snapping his fingers. It’s going to be a long, hard battle to regain his best form.

Meanwhile, AC Milan have expressed an interest. A few months ago, I would have said no way in hell would Robben leave, but now I’m not so sure. With Bayern struggling to gain a Champions League spot, anything is possible. Although a brilliant player, he can be a little petulant (remember the confrontation with Muller earlier this season). Perhaps he feels like he’s reached the point where he can be successful anywhere.

For what it’s worth, Karl-Heinz Rummenigge has denied these reports and said "Arjen has no intention of leaving." Let’s hope it’s true, and let’s hope his back in action for Bayern’s next match: April 2, at home vs. ‘Gladbach. Tune in later this week for a look ahead to that match and some Champions League qualification calculations. Thanks for reading.