For about 88 minutes, it appeared that Bayern was going to walk away with a draw. An early Gomez goal and a Kraft penalty-save gave us the edge, but Papiss Cisse answered with a goal. Freiburg had a few other good chances in the first half, and Bayern was lucky not to go down a goal after Freiburg had a shot rattle off the post, then failed to slot in the rebound into an open net. 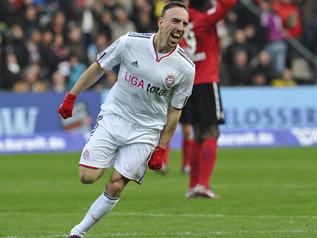 The red gloves are back

Also during the first half, Robben went off, replaced by Altintop. Robben is said to be injured, but he looked healthy as he stormed off the field and into the dressing room. For a guy who's so angry about the prospect of dropping to the Europa League, he ain't doing much to help us avoid it.

Bayern controlled the game for most of the second half, but it looked like we were going to walk away with a draw after wasting several opportunities. Altintop had two shots saved from close range, and Klose (on for Muller late) blasted one past the keeper but had it blocked off the goal line.

Ribery's late strike was a thing of beauty - he dragged in from the left and looked as though he might shoot, but took one extra dribble to create space and then let a right-footed shot fly to find the bottom-right corner of the net.

- Pranjic has to go. I understand he's not a natural defender, but he looks completely lost out there. Danial van Buyten also had some blunders, and he looked stupid with that black arm band torn and flapping, but he did a good job to clear loose balls twice in the last 15 minutes.

- I'll be happy to see van Gaal go, but I have to admit he showed some good coaching after the goal. When everyone was piling up in celebration, van Gaal grabbed Lahm by the ear and pulled him away, telling him to get everyone back in the game and not give it right back.

- I know the Bundesliga is known for having barriers between the crowd and the pitch, but Freibug's park takes it to a new level. Did you see the bars covering the stands? It looked like a camera looking into a prison.

- Hannover won, so we pick up no points on them. Dortmund kicks off in a few minutes. It would be nice to see Mainz beat them, but I don't think we really have much chance of catching the Dorts anyway. I am hoping Bayer Leverkusen loses vs. Schalke tomorrow.

Let's go through player rankings and some additional thoughts ...

First of all, the call on that penalty was ridiculous and laughable. Kraft slid in sideways at a loose ball and was clattered into - no way that's a penalty. Didn't matter, as he stuffed it and covered. He wasn't really at fault on the goal. Didn't have too many saves to make in the second half, but did what he had to.

Got beat over the top on a few occasions, although he did clear the ball nicely when Freiburg was starting to build something in like the 30th or 31st minute. He's a stop-gap solution at this point.

He's never been a speedster, but it looks like he's even slower than usual out there. He's had a great career for us but I imagine we'll be looking to replace him this summer. He did hustle over to clear that ball near the side-line in the last few minutes.

I know he's playing out of position, but he can sometimes look really lost out there. We HAVE to have a better option here.

Played well, covered a lot of ground, sent in a few dangerous crosses in the second half. He's looking a little tired at times, but still the best defender we have by a mile.

I thought he did OK for most of the game, actually, except for the one time he let his man slip behind him while he appeared to be hypnotized. He's improving, although very slowly. Still gets lost for long period of time. For some reason, he never seems to know where to line up when Bayern has to form a wall to defend a free kick? I'm not sure if that's his fault or not, but they look a little amateur-ish on a few of those today.

An adequate game, but he never really seized control of the situation. Had a few good passes, showed a bit of speed when he stopped a Freiburg break by tracking down the ball from behind. Didn't threaten much from that holding position.

I think he was the best player out there today. He's starting to use his size and strength well, as we saw on the goal. Also showing some leadership, as we saw when he got on Kroos for positioning. We're going to have to see more of this from him over the next seven games if we hope to move into the top three.

I was fairly unimpressed. Spent too much time complaining to the referees, had one decent rambling run forward but didn't threaten a whole lot. He seems to be in a weird place mentally/emotionally - miles away from how he looked at the World Cup.

Man of the Match. Even though I think Gomez looked better front to back, Ribery earns MotM by assisting on the first goal and scoring the clutch second. The goal was classic Ribery - sharp, cutting dribble moves, good patience, and an unstoppable shot. To be perfectly honest, though, he didn't do that much in the second half before the goal - he lets the game come to him rather than grab the bull by the horns. A great game, though.

If he's genuinely hurt, then obviously this grade should be "incomplete" rather than a 6. He looked fine when he trudged off, though. Didn't do much in the time he was on. Does anyone else have the impression he won't be here next year?

Showed good energy, but he HAS to find a way to convert the kind of chances he got around the 75th minute (or whenever). Two shot from close range, both right into the keeper. I understand Baumann made a very good save (especially on that first), but you need to find a way to get that ball past him. On the second/rebound shot, it looked like he might have had time to pop it over the keeper, but choose to just blast away again. Looks like he might be getting some starts, though.

Didn't have a chance to do much, although it's good to see him out there. His one chance, he controlled the ball well and got it past Baumann, but Freiburg was packed in at this point with 3 defenders right around the goal, and one was there to block it away. I'm curious to see whether they'll try him in combination with Gomez up front and slide Muller to the wing if Robben is really injured.

Didn't have time to do much except float a shot about 20 yards wide. That beard is coming in nicely, though.

For what it's worth, Mainz just got a last-minute goal to draw Dortmund. As we've discussed, our real competition is Hannover and Leverkusen, and winning the BL might be a pipe dream at this point. But if you're keeping track, Bayern is now only 12 points behind Dortmund for the league lead. Probably too big a hill to climb. We're two behind Hannover and four behind Leverkusen, who plays tomorrow. We'll back back in a few days to take a look at that result and discuss some tactical stuff ahead of our next match vs. 'Gladbach, which isn't for two weeks.