Share All sharing options for: Preview: FC Bayern vs. Freiburg

Do you enjoy being stabbed in the eyeball? If so, Fox Soccer Channel is replaying Tuesday’s Champions League match vs. Inter at 3 AM (USA-East Coast time) tonight. For the rest of us, Bayern travels to Baden-Wurttemberg tomorrow to take on SC Freiburg in a suddenly vital Bundesliga clash.

As we’ve discussed, the club’s focus for the final lap of the season is on Champions League qualification for next year. Muller agrees, promising to "go full throttle" for the last eight matches. Finishing in the top two would earn us an automatic spot in the CL group stage next year, and a third-place finish would at least get us into the final qualifying round. Fourth (where we currently sit) and fifth head to the Europa League, and … well, we know how Arjen Robben feels about that. 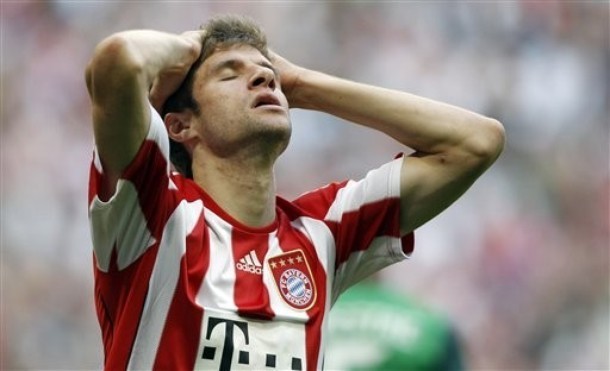 Muller has finally decided that it's time to get serious

Freiburg is an interesting case; they’ve won and lost in equal measure this year (eleven of each, to go along with 4 draws) and have a -3 goal differential. Yet they sit only six points behind Mainz for the final Europa League spot, and were actually an even better bet to claw their way into a European competition before their current three-match losing streak. Striker Papiss Demba Cisse has been lighting the Bundesliga on fire - the Senegalese striker has 19 goals this year in all competitions, 17 of them in the league. In fact, he has over half of the clubs goals in league play this season. So containing "the other, other Cisse" is obviously job one for our back line. Needless to say, my expectations are low.

But the Freis are currently bogged down, having lost three straight. Last time out, their only tally came from an own-goal, and in the previous loss their only goal came on a penalty. The week before that, they were shut out. Add it all up, and Freiburg hasn’t put the ball in the net in open play since February 19. Now, there are two ways to look at this: either we could say "just what our defense needs to get its confidence and rhythm back," or we could say "yeah, but they haven’t faced anyone playing as poorly as us for a while." But either way, these are three points we desperately need, and stand a decent chance of picking up, if we can notch two goals over the course of 90 minutes.

Last time we played Freiburg was back in October, when a Demichelis goal sparked a big win for Bayern. Yeah. How weird does that sound?

Note also that Weather Underground is calling for rain tonight and tomorrow, which could slow down the pitch quite a bit. With Freiburg playing at home, and somewhat close to a Europa League spot, they’re probably going to go all out for the full three points. But if they choose to turtle up and play for a draw, that could help them.

Two quick notes: first, Mark Hughes says he’s happy at Fulham. Who knows if that’s really true, but if so, scratch him off the coaching search-list. Second, Lucio says he’s happy at Inter. His statement yesterday was only meant to say that if "Inter aren't interested in me anymore, but Bayern are, then I could even consider returning to Germany." Whatever, Luch has had some great moments, but I’d prefer someone younger anyway.

Tomorrow’s match is on Gol TV, so no need to track down an internet feed. Unless that’s, like, your "thing" or whatever.