So You Think You Can Coach …

Share All sharing options for: So You Think You Can Coach …

It’s often said that the job of a manager is always in danger, because you can’t just get rid of 21 players, but you can always sack the manager. Well, apparently our club can’t even do that. The best we can do is extract a promise to leave at the end of the year. At any rate, the rumor mill is heating up with respect to van Gaal’s replacement. Join us as we take a look at some of the possibilities.

Some these guys are managers who have already been discussed in the papers; some are well-known names who haven’t been explicitly mentioned in the media, but fans have been considering; and a few are long-shot possibilities that we thought at least deserved a look.

This is sure to be a contentious topic, but let’s keep sight of who’s being replaced. Even someone chosen at random from the phone book would be better than van Gaal.

His name has been mentioned in numerous outlets, including USA Today, and Heynckes has emerged as the possible front-runner. He’s currently the manager at Bayer Leverkusen. Heynckes would be a retread, having managed at Bayern twice before - in the late 1980s, when he won two Bundesliga championships, and in 2009, when he took over for a month before the start of the van Gaal era. 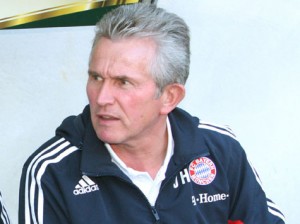 You have to admit, the jacket looks like a natural fit

Jupp has done a good job at Leverkusen - he has the club sitting in second place, with a solid +20 goal differential and a spot in next year’s Champion’s League looking likely. They’ve lost only four Bundesliga games all year. He’s very experienced and has won trophies with multiple clubs. But he’s also 65 years old, and might be seen more as a stabilizing "care-taker" type, rather than the harbinger of a revolutionary new era. Heynckes remains a respectable (but not very exciting) possibility.

The current Fulham boss is linked with the Bayern job in several articles published this morning. The Welsh Wonder played with us for a year in the 1980s, though obviously he’s most associated with Manchester United as far as his playing career.

In his first year at Fulham, Hughes has led the team to a respectable mid-table position. His time at Manchester City was tumultuous, and he was sacked after City’s billionaire owners felt they were not seeing the appropriate return on their investment. Hughes did manage to bring in a number of talented players, including Carlos Tevez, Kolo Toure, Emmanuel Adebayor, and Sylvinho. But Bayern’s problem isn’t competing in the transfer market, it’s getting the talented players we already have to play up to standard.

I’m not feeling very bullish on Hughes. Not sure why, I guess I can just more easily picture him coming to Bayern and doing poorly than I can picture him winning trophies.

An interesting possibility. Sammer currently serves as a director with the DFB, but has managed Dortmund and VfB Stuffgart in the past. His long playing career was mostly spent in Germany, although he did play with Inter for a year in the early 90s.

It’s been six years since Sammer has managed a club team. This would present a few problems: he would have to assemble a team of assistants largely from scratch, he might not be ready for the constant travel and media-handling requirements, and he’s never managed a team as large or important as Bayern. But he’s young (43 years old), he has loads of experience working the technical and tactical side of the game, and he already knows several Bayern players. If we were looking to bring in a coach to install a dynamic new top-to-bottom system, this might be the guy.

You knew we had to discuss the possibility. First of all … yes, he’s a dick. Secondly, it’s not clear he’s going to leave Real Madrid. Even if he does, he could be headed back to England. And he’s the kind of guy that people find it very hard to root for. Plus, I can’t really see him getting along very well with Uli Hoeness. 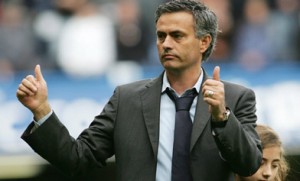 Looking this good does not come cheap.

But he does appear to know how to get the most out of his players. His recent profile in Sports Illustrated contains effusive praise from Sir Alex Ferguson, Didier Drogba, and others. He would come in with a certain degree of respect from the players. The question is, would they get annoyed and tune him out, as they appeared to do with val Gaal? And if so, what does that mean about our club? Are we better off with a quiet, undemanding coach who will let the players do what they want?

The definition of "we’ve been here before." He’s achieved success in his two stints with Bayern. Most of the players still remember him from the last time he was around, and I’m sure they at least prefer him over Klinsmann and van Gaal. He’s the only guy to lead Bayern to a Champion’s League trophy in my lifetime.

But it’s hard to see us moving forward into a new era of trophy-winning ball with Hitzfeld. He’s a capable manager who could avoid making the type of catastrophic mistakes that van Gaal did, but I don’t see him inspiring the younger guys into taking their rightful place on the stage. Plus, it doesn’t appear he wants to come back - he’s apparently happy with the Swiss National Team.

It seems unlikely the current Dortmund boss would want to move. After all, why leave the Bundesliga champion to come to the club that’s hoping to climb up to third place? But given Bayern’s pedigree, our wealth of talent, and the type of money the board could throw at him, you have to think he might be tempted.

The Kloppster has seized control of the Bundesliga in the nearly three years he’s been aboard. His superiority was clearly demonstrated a few weeks ago, when they came the Allianz Arena and crushed us, basically wrapping up the title for the year. Dortmund went into the match facing a Bayern team that seemed to be breaking in the right direction, having won two straight in convincing fashion. Dortmund was also forced to start a rookie goal-keeper and had won only once in their previous three. But they showed up mentally prepared, tactically strong, and with a full understanding of how to counter-attack at exactly the right moment. When Bayern scored to pull even at about 15 minutes and the home crowd went crazy, it would have been easy for Dortmund to fall apart, or at least to turtle up and just try to preserve a draw. But they didn’t even blink, turning around and counter-punching within five minutes.

Now, obviously every good thing Dortmund has accomplished can’t be laid down to their manager. They have good players, and they’ve also had some luck (keep in mind Bayern still has the most goals in the Bundesliga this year). And Dortmund looked rather mediocre in the Europa League this season. Still, I think Klopp is the kind of tough-minded, tactically oriented guy we need, and I hope Uli and Rummy at least consider trying to pry him away.

A dark-horse candidate, but I think the Hannover 96 boss should be considered. Despite a small budget and a lack of established star players, Slomka has his club playing well - two points ahead of us as of today. Even if we manage to pass them, it will be an impressive feat to pull Hannover into the Europa League. His team has been resilient and seems to respond to his leadership. They showed up ready to play vs. Bayern last week, and had us tired and frustrated by the end of the match.

Slomka has never coached a group of stars like our current collection, and it would be unclear whether he could come in and take command of the dressing room from the first day. But he has achieved some success before - taking Schalke to the Champions League quarter-finals and to a second-place Bundesliga finish, and saving Hannover from relegation after taking over halfway through last season. He’s young, he’s intelligent, and it appears Hannover might be having trouble trying to re-sign him

So there you have it. Or maybe not, because there are more candidates we haven’t even discussed yet. Most the these guys are currently employed, and some currently involved in vital league and cup matches (unlike us), so I don’t expect an official announcement for a few weeks. Whoever it is will inherit one of the most interesting jobs in sports - a squad of super-talented players who display surprising fragility, and a club with a glorious history or trophies and titles where expectations will be running high from the first day. We’ll continue to follow the story over the next few weeks.

It’s not like there’s much else to talk about, is there?