Share All sharing options for: Robben: The Defensive Difference? 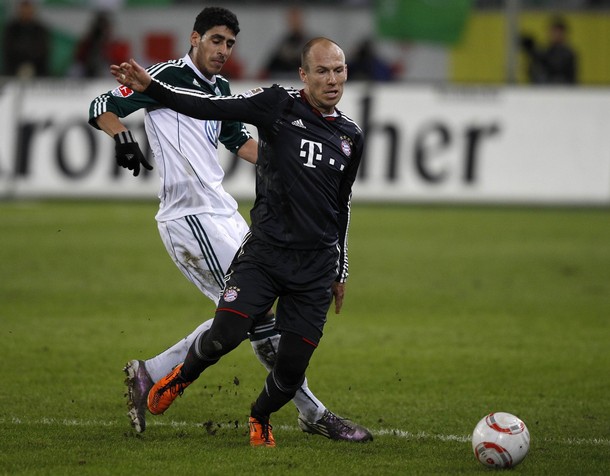 Something I noticed during last week’s loss was the sheer amount of forward movement by Philipp Lahm. In the absence of Arjen Robben, it made perfect sense of course. Despite scoring a goal in the match, Hamit Altintop always has the tendency to play the ball back or towards the center rather than to dribble and create down the flank. That became an added task for Lahm last Saturday. Still, I don’t think anyone would step out and blame any of the goals Bayern conceded on Lahm. So what might Lahm’s movements tell us about the rest of the defense? And would Robben’s presence actually improve Bayern’s team defense?

First let’s look at the heat-maps for Robben in two matches: Wolfsburg (left) and Bremen (right). Note that Robben did not play the entire match in Wolfsburg. 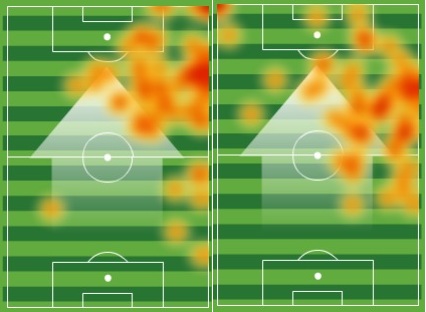 I would conclude they are not significantly different. Here are Lahm’s in the same sequence: 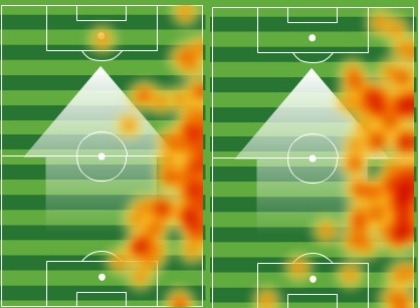 Lahm is measurably further back on the pitch against Bremen, and is also drifting to the center a bit more which can probably be explained by a combination of two things: Bremen’s relatively more aggressive posture and the fact that Robben played the entire match in front of him versus 74 minutes in Wolfsburg. 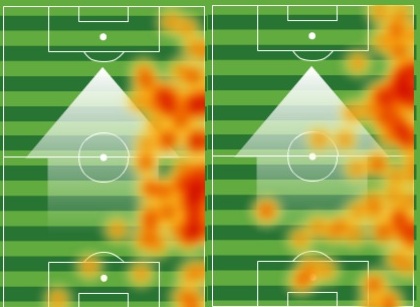 A stark difference is seen, and Lahm appears to have spent the majority of his time in the opponent’s half in Köln . Now, there’s an argument to be made that this really doesn’t have anything to do with Robben at all, but with the fact the Köln played a much more passive defense in the first half of the match. That undoubtedly plays a minor part. But I think what you’re seeing mainly seeing there is the difference in Lahm’s role when Robben isn’t on the pitch. And it has repercussions for the other defenders. Here is Tymoshchuk’s map against Bremen (left) and Köln (right) 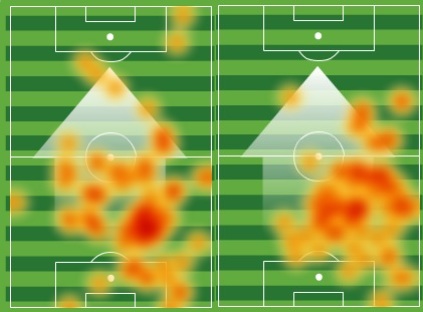 Against Bremen, he stays at home. But against Köln, he drifts forward perilously, and what’s more, into spaces where we’d expect to find Lahm. The change is also quite visible when we compare Andreas Ottl against Bremen (left) and Köln (right): 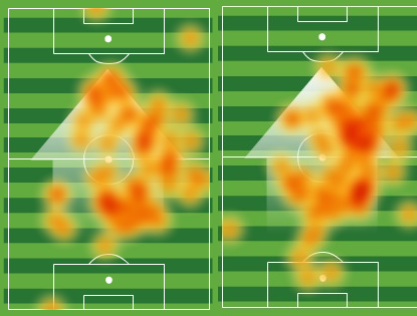 Again, you have a forward drift in the Köln match, that simply isn’t there against Bremen, and one that can’t be chalked up to just the difference in opponents’ scheme.

Is if fair to say Arjen Robben improves Bayern’s defense? The picture will undoubtedly get cloudier with Bastian Schweinsteiger back in the Bayern “double 6″ this weekend. But it wouldn’t surprise me a bit to find Anatoliy Tymoshchuk much less susceptible to being caught out of position and Philipp Lahm much more free to make breathtaking tackles on the edges.