The Rider-less Horse - A Play in Six Acts

Share All sharing options for: The Rider-less Horse - A Play in Six Acts

In my ongoing attempt to qualify my digital cable bill as a tax-deductible business expense, I’ve resolved to illustrate a few points with some freeze-frame fun. As we all know, Bastian Schweinsteiger is out until at least January, and his absence has blasted a big hole in FC Bayern’s formation. The various options for his replacement included moving Kroos to a midfield spot, bringing David Alaba off the bench to replace Bastian, bringing Pranjic off the bench to replace Bastian, playing Tymoschuk and Gustavo next to each other, or a major formational change that diminishes the need for a passer-builder middie. Once Robben returns, things will get a little less dire, at least as far as depth. But even then, the car needs a motor … or, the ship needs a rudder … or, the horse needs a rider … or, choose your own metaphor, but we need someone who can set up the offense, see the entire field, and generally control the game from the middle.

In our last match, a 2-1 win over FC Augsburg, the decision was made to plug David Alaba into the CM spot and leave everyone else as they were.  I don’t want to judge Alaba too harshly, because he’s a young guy playing a position he hadn’t played much (at least this season), and he didn’t get a lot of help from his teammates.  Plus he did a few things decently, and the effort was there.  But any seasoned Bayern fan who watched the game could immediately tell that Alaba isn’t Schweinsteiger.  To be honest, no one else on the field was doing a great Schweinsteiger impersonation, either.

Let’s pick it up in the second half, approaching 51 minutes into the match.  Bayern was a carrying a 2-0 lead, so I suppose you could say we had no reason to be super-aggressive.  But Augsburg had already started to show some flashes of danger, and we had blown a few chances – at that point, Bayern really could have used a goal to put the game away at 3-0.  One of the Augsburg middies whacked the ball upfield, a contested header knocked it high and slightly back toward the midfield stripe, and Alaba managed to run under it, leaving us with this scenario: 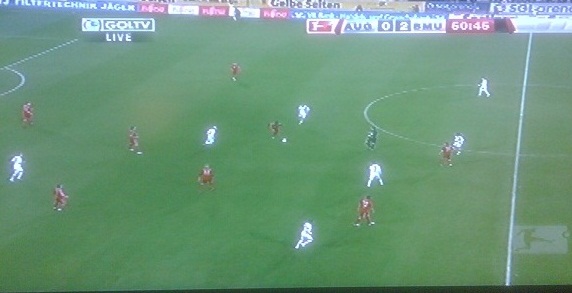 Alaba with the ball at his feet.  At this point, there are 7 Augsburg defenders on the near side of the field (IE, on their “offensive” side).  We can’t tell what Alaba saw (or didn’t see) downfield, but if ever there was a time to send up a long, leading pass, this would have been it – only 4 opponents, at most, back to try to contain Ribery, Gomez and Müller, if only you could get the ball to them.

But, to be fair, if Alaba had tried a long pass and turned the ball over, we would be complaining about that, too.  Let’s give him the benefit of the doubt and say he didn’t have a clear path to hit Reebs or Gomez with a pass, and/or at least 2 of the unseen Augsburg players were in perfect position to take away a long ball.

Instead, Alaba chose a safe option – knocking it diagonally-backwards to Tymo:

This is not a great play by Alaba, but at least it’s a defensible one.  Tymo was not in any position to threaten forward with the ball, but he was open and it’s a safe outlet pass.  You can already see the window starting to close, though – look at the bottom-most Augsburg midfielder in the picture, falling back to defend.

Tymo similarly doesn’t have any open lanes to pass the ball downfield.  He could try a one-touch pass right back to Alaba, but Alaba isn’t racing downfield through the defense, and a long pass down to Gomez would probably find him double-teamed by Augsburg CBs at this point.  Instead, Tymoschuk chooses to knock it backwards to Badstuber:

Another pass that’s not necessarily a bad decision, but certainly not creative or threatening to the defense.  Badstuber controls from his CB spot, but doesn’t have many options – neither Tymochuk nor Alaba is trying to carve a path through the defense.  Instead, Alaba appears to be getting into that open spot in the short-middle; a good spot to safely receive a pass, but not one from which he can threaten.  Tymoschuk, having just exerted the energy from that backwards pass, has apparently taken off on a leisurely Sunday stroll.  So, Badstuber takes two rhythm dribbles and waits for someone to pop open: 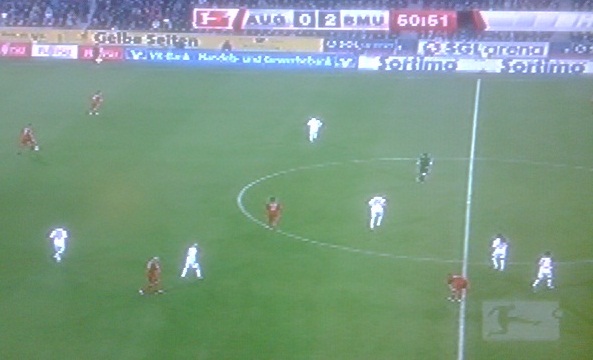 Nothing doing.  Alaba has filled in the safe but passive spot a little downfield from Badstuber, Kroos appears to be leaning over tying his shoes, and a few of the Augsburg players have either dropped back to defend or are in the process of doing so.  One more dribble for Badstuber, and he chooses to lump it downfield to Ribery: 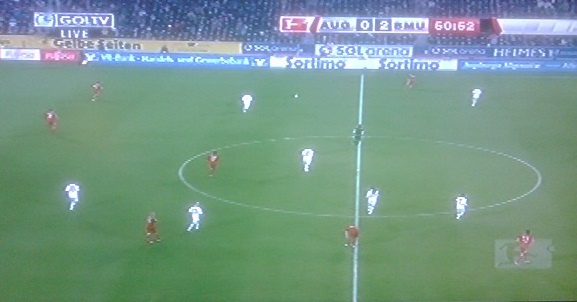 Again, it’s a defensible choice – hey, when in doubt, get it to a guy who can beat defenders and score.  But, the pass is slow and lazy, and sent right to Ribery, rather than a little ahead of him where he can run through it.  And by this time, enough defenders have fallen back to ruin any chance at a break. By the time Ribery controls the ball and turns downfield, he’d have to beat a double-team just to get within 25 yards of the goal, much less actually score: 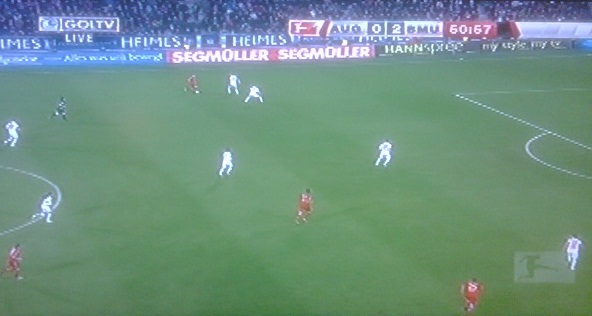 Not only does Augsburg have 5 guys to defend 3 forwards, but even their next 2 (the two guys in white on the left side of the screen) are closer than our next one (Kroos, whose shoes are apparently now safely tied).  So even if Ribery tried to be patient and wait for Kroos to fill in the channel, we’d have 4 guys trying to break down 7, with neither Tymoschuk nor Alaba anywhere to be seen.

This series indicates exactly what it looks like when you’re missing your builder-visionary in the middle of the field.  It’s not like trying to replace a ‘keeper or CB, where he will immediately get exposed by the other team’s skill players and leave everyone groaning.  Instead, Bastian’s responsibility gets dissipated, so that no one is FORCED to take on his role.  You end up with a series of individual decisions that are each, in and of themselves, understandable, but that collectively result in an offense that becomes stagnant and passive rather than mobile and assertive.

I don’t want to judge too harshly, because we ended up in the win column anyway, and Heynckes is still tinkering.  But neither Alaba nor Tymoschuk seemed to be the “seize control and break down the defense” type we’re looking for at that CM role.  I don’t know what the answer is – give Pranjic a try?  Move Kroos back and Alaba up into the front 4?  Try Müller in the middle of the field?  He doesn’t have the defensive chops, but he does see the field very well.

Luckily, we have two weeks to work on it, and most of our roster will not be pulling international duty.  We’ll be back later this week to discuss team news, look into the Robben situation, and maybe talk Euro play-in round.  Any ideas for international break topics?  E-mail me at bayern.offside@yahoo.com or find me on twitter at http://twitter.com/bayern_offside.  Thanks for reading.