In match week 12 of the 2011-2012 Bundesliga season. FC Bayern has righted the ship since the loss to Hannover 96, winning three straight matches (one in each competition). But the loss of Bastian Schweinsteiger to a broken collar-bone throws the season in flux, as we now have several questions to answer.

The match kicks off at 11:30 AM Eastern in the USA. I’m trying to do the time zone and daylight’s savings time math in my head, and I think it will be a 5:30 PM start in Augsburg, but feel free to correct me if I got that wrong. Gol! TV will be broadcasting the match live and in English.

The club’s official site gives no hint as to how Die Roten will line up. Of the many Bastian-less options, playing Tymoschuk and Gustavo next to each other is probably the one that requires the least adjustment, so my guess is that will be the way they start (keep in mind they’ve only had two days of training since the Napoli match). Other options that involve new formations or rely more heavily on Kroos or Alaba might be better over the next 8 weeks, but on such short notice it might make sense to let everyone else stay where they are and try to run the midfield with our two traditional Bastian-partners.

If that’s the way it works out, I think the pressure will be on Tymoschuk to refine his game to include more passing, more building, and more open field vision. Both Tymo and Goose will have to do more, but Gustavo was always more of a tough-tackling destroyer type (which we’re still going to need). Tymoshuck has always been a decent passer with a good motor, but he’s going to have to take more responsibility for getting the ball to our forwards in a place where they can do some damage with it. Also, it’s worth noting that Ribery, Kroos and Müller are going to have to keep one eye back upfield to held the Bastian replacement (whoever it is), and they won’t have the same back-pass outlet until the chemistry gets in sync. 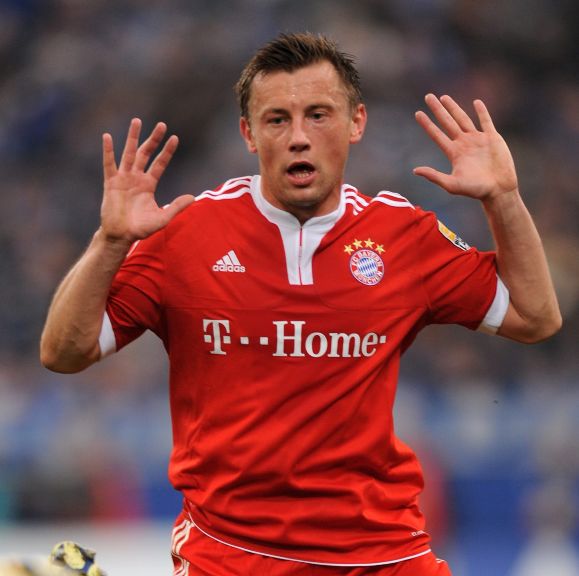 Also, it will be really interesting to see what happens with Olic over the next 3-4 games. He doesn’t play the same position as Schweinsteiger, but there still could be more minutes opening up in the front half of the formation (especially if Kroos gets some burn at CM). Olic has been griping about his lack of opportunity. If the club really values him and wants to keep him around, he’ll probably get a chance to play a lot over the next month – if not as a starter, at least as the first guy off the bench. But if Alaba benefits more than Olic, it could be a sign he’s on his way out.

FC Augsburg is currently playing their first ever season in the 1. Bundesliga. They’ve fought their way up through the regional ranks over the past decade, and got their first-ever top flight win last month by beating Mainz. While the club certainly deserves accolades for clawing their way to the best division, they always knew it would be a season-long fight just to stay out of the automatic relegation spots. Right now they’re ranked 17th of the 18 clubs in the 1. Bundesliga, and have scored the fewest goals in the league (8 goals from 11 matches) and have been clean-sheeted 5 times.

One of Augsburg’s bug purchases after winning promotion was Sascha Mölders, a German striker who scored 15 goals with FSV Frankfurt in the 2. Bundi last year. He leads Augsburg with 3 so far this season, including two in the second half of their opening day draw with SC Freiburg.

I don’t usually say things like this, and you never want to take anything for granted … but, honestly, if we don’t beat the stuffing out of these guys, the Bastian-less era could get ugly in a hurry.

- Augsburg’s stadium looks very cool for a club that just started playing 1. Bundesliga ball – the SGL Areana, which hosted several games during last year’s Women’s World Cup, including a quarterfinal match between Sweden and Australia. Steep seating banks, and the first row of the stands comes right up to the field.

- Unless I’m incorrectly translating the weather report, the winds in Augsburg are currently gusting at speeds up to 100 km per hour. I might be reading that wrong, but please be careful if you’re going to the game.

- We’ll be back to update with line-ups and/or hints about how we will fill the gaping hole in our midfield. With the late game on Sunday, looks like Jupp Heynckes is keeping his options open for now. Thanks for reading.