The latest word on Bastian’s injury is that he’ll be on the shelf for at least 6 weeks. But the 6-week figure refers to how long until he even try to train again, at which point it will be a few more weeks until he’s ready for game action. So, at this point, he’s out until 2012, including for the rest of the Group Stage of the UEFA Champions League.

First and foremost - we wish Bastian the best of luck in a quick and complete recovery.  In the long run, neither Bayern nor the national team would be the same without him, so it’s more important that his recovery is “total” than it is to get him back on the field quickly.  As far as the Bayern line-up, this injury in conjunction with Robben’s ongoing problems suddenly leaves us looking a little thin.

As far as how to replace Bastian on the field, these are probably the club’s options:

(1) Play Tymoschuk and Gustavo at the two CDM spots

Under this formulation, everyone else stays where they are - the back 4 stays the same, the front 4 stays as Ribery - Kroos - Müller + Gomez, with Robben eventually coming back, hopefully sometime in November.  Tymo and Goose each have plenty of experience playing in such a role, but they usually do it one at a time, and each alongside Schweinsteiger - not next to each other.

The advantage here is that both of these guys are pretty good at defending, so we wouldn’t go into a tail-spin defensively.  Gustavo is an excellent tackler and ball-winner, Tymo is at least decent on the tackling and covers a lot of ground.  Also, we wouldn’t have to tinker with the rest of the line-up.  Now, the disadvantage is that we’d lose a lot of passing and vision from the line-up.  Obviously, we’re going to lose a lot of that no matter what, because Bastian is our midfield general who controls the formation of the offense.  But this option would leave that role in the hands of two guys who have never really occupied it before.  Opponents with a good defensive midfield could cut off our front 4 from the midfield and choke off the attack.

(2) Move Kroos back into Bastian’s spot

This is the semi-unconventional move; taking a risk, but not stirring up much other than moving one guy.  The back 4 would remain the same, Kroos would take on the builder-visionary role, and would be partnered with Gustavo or Tymoshuck depending upon the game or the opponent.  Up front, Müller slides back into his second-striker role, and Alaba or Olic fills in on the right until Robben returns.

I like Kroos a lot, and think he brings both skill and hustle to the table.  He’s pretty accurate on the pass, and he’d still have a chance to unleash his deadly long shot.  I guess the two concerns here are: first, Kroos didn’t thrive in this role last year, and maybe isn’t fast enough to track back and defend very effectively; and two, it throws off the forward portion of our formation, which has been playing very well recently.  Olic still hasn’t recovered his form 100%, and was never great on the wing anyway, while Alaba has looked really good in limited minutes, but has never been asked to start against a tough defense.  And even if Alaba successfully takes up the role, we lose our super-sub/change of pace guy off the bench. 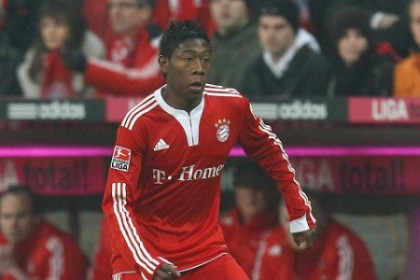 (3) Bring Alaba off the bench into Bastian’s spot

My conception is that, before this season started, David was seen as a midfielder just as much as he was seen as a wing.  He does see the field pretty well, and he’s slippery enough that opposing DMs would find him hard to contain.  At this point, though, it’s a pretty big risk - Alaba turned 19 this summer, and has virtually no experience playing in huge games (meaning CL matches or games between two Bundesliga giants).  And whatever learning he has done so far this year would amount to little, as we’d be asking him to change positions for the second time in a year.

Interesting, but this would be a big gamble.

Another risky move with a team that’s been playing so well, but we have enough talent that we should be able to cycle through different formations.  We could adopt the form of a 4-1-4-1, which is something like what the national team does for certain opponents.

Ribery - Kroos - Müller - Robben (Olic or Alaba until his return)

Gustavo (Tymo off the bench or when Gustavo needs a rest)

I think this is an intriguing idea.  It gives us a ton of width offensively, and creates huge match-up problems for any team trying to mark us.  Although Gomez would be the top-most man in the formation, Müller or either of the wings can cut forward if an opportunity arises.

The problem here is that, with only 1 defensive midfielder, we don’t give our CBs a lot of cover.  To an extent, Kroos could sometimes drop a little deeper to harass the opponent’s midfielders (making this not entirely unlike Option 1), but he’s not that great in a defensive role, and surely not fast enough to play as part of a forward line and still race back to do much on defense.  This option puts the most pressure on Gustavo.  But, I think there’s a good chance he could handle it, and I hope Jupp Heynckes won’t rule this idea out.

(5) Some other crazy idea to replace Bastian

Also, angry Bayern vs. Napoli comments will be ignored, and angry Germany vs. Italy comments will be deleted and probably shouldn’t be posted in the first place.  I’m not referring to anyone in particular - this applies to me as much as anyone.  I’m just saying, leave yesterday’s game in the past, and let’s talk about what we’re going to do going forward.  Thanks for reading.