Share All sharing options for: Mario's Long Circle - A Play in Nine Acts

Welcome back. Today, our stop-frame micro analysis makes a return. And this time, it has uncovered something that none of you can blame on David Alaba.

Last season, FC Bayern was poor on set pieces all year - both offensively (failing to generate many dangerous attacks from free kicks and corners) and defensively (allowing too many good shots and goals from opponents’ free kicks and corners). From such limited evidence as we have, our offensive set-piece problems have eased a bit - both of our goals vs. Mainz cam from finding van Buyten in the area. We’ve also had a few other goals and several additional good chances from set pieces this season. But on the defensive end, our attempts to guard free kicks and corners continue to lag, and this cost us huge vs. Mainz, as Niko Bungert’s goal put our opponents up by two and basically killed the match.

Pick it up in the 73rd minute - corner to Mainz.  Bayern has already brought on Olic for Gustavo, Mainz is still running with their starting XI.  Mainz lines up in a fairly spread out corner formation - meaning they aren’t bunching 7 guys in one spot, they have several points inside the 18 with a single offensive player or a pair.  At the edge of the 6-yard box, a little past halfway across the field laterally, they have two offensive players right near each other: Malik Fathi and Niko Bungert.  Both are primarily defensive players, but both are tall (6’1” and 6’2”), so they do present a danger fron set pieces.

Before the kick, both Alaba and Gomez are marking them: 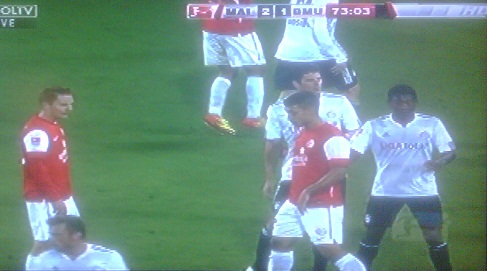 Both Bayern players are within an arm’s length from Fathi, but Gomez is still halfway watching Bungert.  Now - before even looking at any more pictures, what do offensive teams ALWAYS try to do from this situation?  If you’ve played, coached, or watched a lot of soccer, you know what’s coming next - a screen, in which one offensive player uses his body to shield a defender and allow his offensive teammate to create some space.  In basketball, we’d call it a “pick.”  Let’s see how this develops: 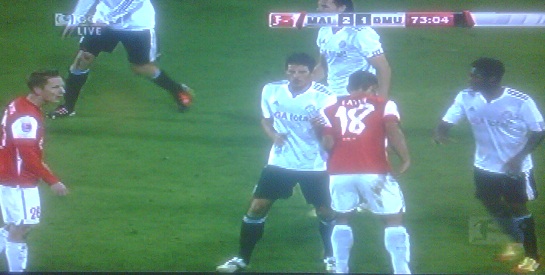 Saw that one coming.  Let’s step back for a minute … when the offense tries to screen a defender, there are two main stretegies that a defensive coach will usually teach.  Either the guy getting screened can fight off the pick, shove his way through, and stay with his man; or the defenders can switch, with the guy getting screened latching onto the guy setting the pick (Fathi, in this case), and the other defender closing in on the target man (Bungert).  What a defensive coach usually WON’T prefer is that the screened defender circle around the screen and try to find his man on the other side.  It leaves the target man with too much space.  And if that IS going to happen, the defender has to get around the screen and find his man IMMEDIATELY - like, right away, and re-establish contact with him.  But if you allow a screen to separate you from your mark, don’t switch, and don’t immediately slash around and find him, you’ve allowed the screen to succeed.  Let’s roll forward one notch:

So far, ^ so good.  Gomez is aware of the screen, and he’s keeping himself close to Bungert.  He’s properly using his body to ward off Fathi, and Alaba is between Fathi and the goal (with van Buyten also lurking around for back-up).  One more click:

^ Still OK.  Gomez has shaken off the screen, and still has his eyes on Bungert.  You’d like him to stay within a step of his mark, but he’s at least within two steps, and is aware of Fathi’s still-present screen (to Gomez’s left / towards us, from the camera’s view).  One more click forward: 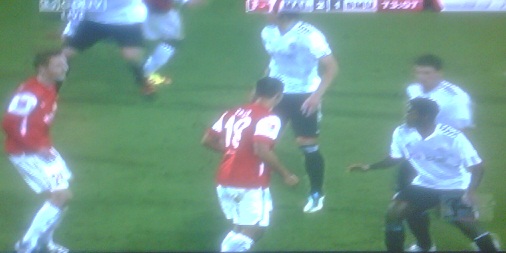 Here’s ^ where it all falls apart.  Rather than elbowing his way through the pick and sticking with his man, Gomez has chosen to circle around the OUTSIDE of the screen and try to find Bungert on the other side.  And not only does he choose to loop around Fathi, he goes all the way around Alaba, too.  Even if Gomez is the quickest-footed guy in the world (which he’s not), there’s going to be a solid one-and-a-half seconds where Bungert is unmarked.  And it will be even longer if Gomez doesn’t close the gap as soon as he clears the pile …

Which ^ he doesn’t.  As this one is taken, the corner kick is just being struck - you can see it in Bungert and van Buyten’s eyes, and Bungert knows he has a bit of space to run through.  A second later, we’ve got this: 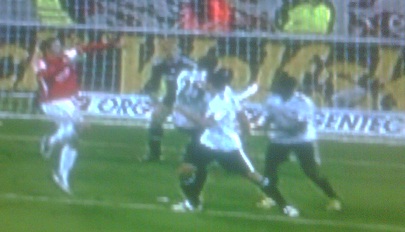 New angle, but same spot in the sequence.  Gomez has finally cleared the screen and is generally in the area, but the ball is already in the air, and Bungert has too much space.  Leading to: 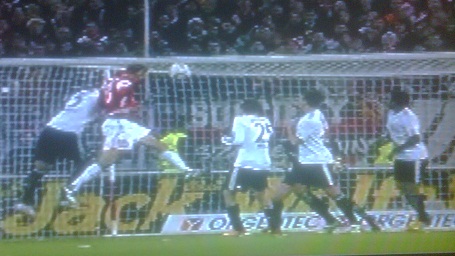 Match to Mainz.  van Buyten is valiantly trying to stop the shot from behind, but Bungert has the inside angle on him.  Müller, Gomez, and Alaba ought to be charged admission if all they want to do is sit there and watch.  Now, none of those three are natural defenders, but at the same time Bungert isn’t a natural striker.  Our corner-defending strategy has to be clear from the start, and it has to be properly executed.  If we’re supposed to switch on screens, we have to make that clear ahead of time and call it out.  If we’re supposed to just fight through all screens, Gomez needs to get inside the pick-man and use his body to shrug off the contact.  And if we’re supposed to go around the screen and find the guy on the other side (which is stupid in the first place), then the defender needs to sprint around the corner and re-establish contact, not just lazily roll around the other players and lose sight of his guy.

Neuer can’t really be blamed, although it would have been a lot cooler if he’d managed to get a hand on it.  One more angle: 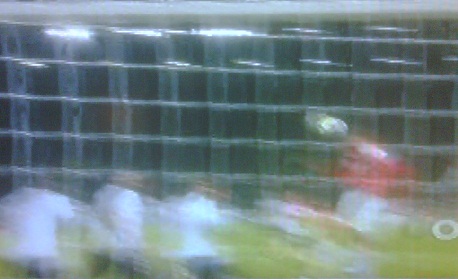 This ^ one adds nothing to the analysis, I just like the way it looks with the blurred eges and the netting in the foreground.  Almost impressionist, no?

Back with the Werder Bremen preview later his week.  Thanks for reading.