Share All sharing options for: Preview: FC Bayern vs. Villarreal

In Match 5 of the Group Stage of the 2011-2012 UEFA Champions League. It’s been a while since FC Bayern’s last foray into Champions League play, with an international break and a pair of Bundesliga matches in the mean time. Bayern needs only a single point to clinch a spot in the knockout stage, and a win would practically secure top spot in the group (given our current 3-point edge and big advantage in goal differential). For Villarreal, meanwhile, the match is mostly just for pride - they haven’t taken a single point from the Group Stage campaign thus far, and would love to at least secure a draw to salvage some dignity. Although, looking at it now, it seems Villarreal could still possibly climb into third place (and a Europa League spot) with back-to-back wins vs. Bayern and Napoli. A tall order, but at least that might give them something to play for. 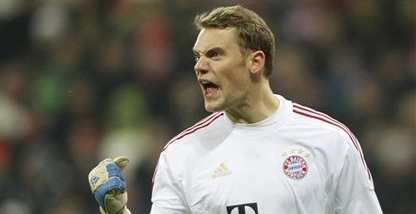 Manager Jupp Heynckes has confirmed that Arjen Robben will start on the right wing.  Robben looked decent this past weekend vs. Dortmund, but clearly wasn’t at full speed and didn’t present the sort of dangerous presence that Bayern fans are used to seeing.  Hopefully a few more days of training will have Robben a little closer to 100%.  His presence means that Thomas Müller will probably start behind Gomez at the second striker position - his natural spot, but one he will have to get used to again after playing much of this year on the wing.  He also looked a little bit slow on the uptake vs. Dortmund (though, to be fair, Dortmund played great defensively and our front 4 were sort of stranded for much of the game).

On the defensive side of the field, Holger Badstuber will sit after picking up a red card vs. Napoli at the beginning of the month.  The back 4 will likely consist of Lahm, van Buyten, Boateng and Rafinha, with Contento the first guy off the bench.

Another item of note - Breno returned to competitive action last week with Bayern II.  No way he’s ready to contribute tomorrow, but if his knee holds up and he gets his head together, he could make a few appearances before the end of December.  If so, who knows - maybe he won’t get shipped back to South America in the winter.  He’s still only 22 years old.  None of us can say for sure what his mental / emotional status is, but if the injuries and physical struggles were contributing to the emotional turmoil, we could be (cautiously) optimistic that physical improvement might lead him out of the fog.

We discussed Villarreal in depth before the last Champions League match, and they haven’t gotten any better since then.  With 4 losses out of 4 Champions League matches, the club certainly hasn’t been earning any pride for La Liga.  But, it’s only fair to note that their first loss to Manchester City in October came on a last-second goal from Agüero.  For 92 minutes of that match, the Yellow Submarine had contained a high-powered City club pretty admirably, and if they’d held on for a draw on the road in that match, their CL campaign could have looked a lot different.

Additionally, Villarreal has held three straight opponents scoreless in domestic play, winning twice and drawing once over that span.  In fact, considering their last two domestic losses were to Real Madrid and a Levante side that sits in 4th place in Spain, you have to go back to September to find a match in which Villarreal lost to a weak team.  I’m not saying it’s time to panic, I’m just saying they’ve righted the ship somewhat, and Bayern needs to play smart and give maximum effort if we’re going to walk away with all 3 points.

- The weather report calls for more cold temperatures at the Allianz Arena - it’s currently below freezing, and will probably get only a bit warmer by tomorrow evening (or “tonight,” if you’re reading from germany - already 2 AM local time).  The tempurature will be about 36 degrees farenheit (2 above zero on the centigrade scale) by kick-off.  So expect more long-sleeves and visible breath.

- The Napoli - Man City game takes place simultaneously.  If Bayern wins, and that one ends in a Napoli win or a draw, Bayern secures a first-place finish in the group.  Other big games of note tomorrow include Manchester United vs. Benfica (currently tied atop Group C), Inter Milan vs. Trabzonspor (a win for Inter earns them the Group B crown), and Lyon hosting Ajax (Ajax can secure 2nd place and a spot in the knockout stage with a win).

- One last note - the site’s numbers have been very healthy over the past month, and we’re generating a lot of interest.  So, that’s great.  Thanks to everyone who’s tuned in to read, left a comment, subscribed to our twitter feed at http://twitter.com/bayern_offside, or e-mailed us with a question or correction.  BUT … with increased traffic comes more scrutiny and a bigger need to act properly.  Conversing and exchanging view in the comments section is great.  Even vehement arguments are fine.  Just watch the language.  In particular, no one’s defense got “raped” by anyone.  That’s unnecessary, and there are better ways to indicate whatever it is you want to convey.  Come on, guys, my wife and sister are reading.