Every FC Bayern game is exciting, but some are much more meaningful than others. Outside of Champions League play, Saturday’s match vs. Borussia Dortmund promises to be the biggest, most meaningful game of the year thus far. FC Bayern sits at the top of the table, but Dortmund are defending champs and are currently tied for second. Both rosters are full of talent. Bayern will be looking to avenge two ugly losses of last year and cement our rightful place at the top, while Dortmund wants to close the gap and continue their current run of excellent play.

For Bayern, Arjen Robben had long targeted this game is his hopeful return date after pelvic surgery.  As of now, he’s said to be fully fit, but it’s still undetermined whether he will actually play vs. Dortmund.  If he starts, then Müller moves back into the second striker role and maybe Kroos (who looked amazing in Germany’s recent friendly win) can play in midfield.  But if Robben can’t start, then we have a hole in either the attacking line or the CDM line, likely to be filled by Alaba or Pranjic.

In the midfield, Tymoschuk is a “no” after receiving a three-match ban for his recent red card.  So Gustavo is a sure bet to start.  Next to him will probably be Kroos (if we can find another competent forward) or Alaba (who was underwhelming, though I wouldn’t say poor, in his last outing).  Tons of question marks.

The back line will surely feature Lahm and Boateng, along with two of these three: van Buyten, Badstuber and Rafinha.  I think Jupp Heynckes has generally done a very good job, but my biggest problem with him is that he doesn’t seem to have a lot of faith in Rafinha.  If it were up to me, Raf would be starting at RW every game, but he seems to be sharing time there with Boateng (when Boateng is at RW, both Holger and DvB start at the CB spots).

In related news, Marseille is interested in reacquiring van Buyten, but he says he remains committed to FC Bayern.  Stay tuned.

As we all know, defending Bundesliga champs BVB are always one of the toughest tests in domestic play.  They jacked us up twice last year by a total score of 5 goals to 1, with the second match (a 3-1 loss in the Allianz) effectively ending any chance we had at the title. 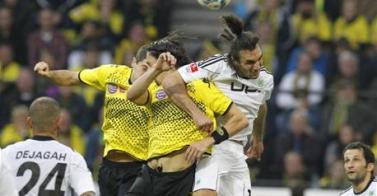 Mr. Subotic has been disposed of

Usually, in my “The Opponent” section, I try to provide some insight into the other club’s strengths and weaknesses - “their biggest threat is ____, but they have a weakness at ____.”  Unfortunately, with Dortmund, they’re pretty solid from front to back.  Defender Neven Subotic will miss the match after breaking several bones in his face when struck by the elbow of Wolfsburg’s Sotirios Kyrgiakos, but with Hummels and Santana ready to go, they’re still a very tough defense to break down.  Up front, BVB is led by Lewandowski, Shinji Kagawa, and Luca Barrios (who was lighting it up last year, but has struggled a bit this year).  And of course, the one guy you can never lose track of is Götze.

In their recent thrashing of Wolfsburg, Dortmund started with Lewandowski at the very top, with Großkreutz, Kagawa, and Götze behind him.  All of those three are a threat to dash forward at any moment, so it’s impossible for two CBs to keep them all under wraps and to also keep track of Lewandoski at the same time.  Once Dortmund gets possession, sets up shop in the offensive end, and starts to cycle through their sets, they will end up getting a high-percentage shot more often than not.  So the key is to short-circuit the attack with aggressive play in the midfield, and to isolate Lewandowski (or Barrios, if he plays striker off the bench) from their attacking-middie line.

Dortmund started the season by clobbering Hamburg, but then went through a rough patch that had them mired in the middle of the table by mid-September.  But over the past 6 Bundesliga matches, they’ve won 5 and lost once, racking up a combined total score of 19-3.  Basically, they’re in great form right now, and our makeshift Bastian-less midfield is really going to have its hands full.

- The match will broadcast both over the internet (via ESPN 3) and over cable (ESPN Deportes).  It’s a 12:30 PM start here on the east coast of the USA, which I think means a 6:30 start at the Allianz.

- Subotic is very, very angry about the elbow to the face.  I guess I don’t blame him, although I don’t know if it was really intentional or not.  Also, did you know he lived in Utah when he was young?  He played with both the U-17 and U-20 sides for the USA.  Don’t now how we let him slip away.

- Also, if there were still a country called “Yugoslavia,” and it included all players from its former component parts, they would probably be better than Brazil, France, England or Netherlands and possibly better than Germany or Spain.  Think about it:

- Zlatan Ibrahimovic (currently plays for Sweden, but could have played for Croatia if he’d wanted, and certainly would have if they had this line-up).

Not a political statement, just an interesting thought.

- Back with more tonight or tomorrow as new information becomes available.  Thanks for reading.