The international break rolls on, with matches tomorrow, over the weekend, and into next week. Fans can quench their thirst for footballing action by watching FC Bayern stars in several locales, as detailed below.

As far as Bayern players, the biggest matches are always Germany matches, obviously.  Die Nationalelf has already wrapped up the top spot in Group A, making this weekend’s matches just a glorified tune-up.  But, it’s always good to get everyone on the same page and work out the timing.  Germany is at Turkey on Friday, then at home vs. Belgium this coming Tuesday.  This latter match takes place at the ESPRIT Arena in Düsseldorf, and will feature on ESPN 2 here in the States.

A quick run through of some other international sides that will (or might) feature Bayern players:

Ribery has been ruled out of tomorrow’s match vs. Albania with a calf strain.  It’s unclear whether this extends to next week’s showdown with Bosnia-Herzegovina, the only other side in Group C with a chance to catch the French.  Given the depth of the French side at the forward position, I hope they don’t go taking any chances with our fragile winger.

Daniel van Buyten is up to full speed … such as it is.  His Beglian side still have an outside chance to qualify for the next round, but they’d need to beat Kazakhstan tomorrow and then Germany next week (this latter game the ESPN 2 feature) and also get some help.  It’s not impossible, but definitely a long shot at this point.

With Olic not back to 100% and Pranjic no longer with the Croatian side, I don’t think Bayern will have anyone featuring this time around.  For what it’s worth, they’re at Greece in possibly the biggest match of the day tomorrow, then at home vs. Latvia on Tuesday.

Arjen Robben has been ruled out of the Netherlands two upcoming matches (home vs. Moldova, then at Sweden).  The Dutch have a lot of other injury problems, too, but they qualified long ago and are a perfect 8 wins in 8 games.

With Alaba likely to feature, Austria presents a mildly interesting look for Bayern fans.  They’re on the road travelling through central Asia, with games at Azerbaijan, at Kazakhstan.  Already eliminated from contention, there’s a slight chance that Bayern II forward Toni Vastic could get a call.  However, I haven’t heard any such news, so it’s not very likely. 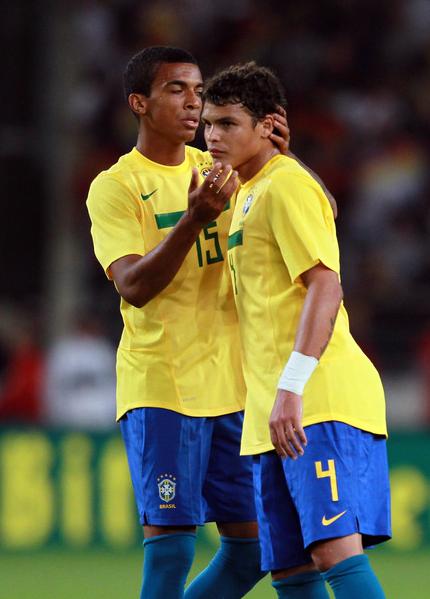 I think he looks better in red ...

Gustavo has been placed on the squad list for Brazil’s friendly vs. Costa Rica.  A big call up for Goose, and a great chance for him to broaden his experience a bit.  But if he gets hurt, we’re in a deep hole in the midfield without him.

Who am I forgetting?  Tymoschuk will be resting, as Ukraine automatically qualify for next year’s Euro Championships as co-hosts.  I don’t think Japan has any international plans this weekend.  Unfortunately, Bayern doesn’t have anyone playing in the ongoing African Cup of Nations qualifiers - it’s actually a very cool and wide-open tournament (I’m doing a similar international-break-player-preview for QPR - Senegal is my dark horse pick to win it all, BTW).

So, go Germany … I guess … but mainly, everyone just stay healthy.