In match week 11 of the 2011-2012 Bundesliga season. FC Bayern will go into this Bavarian Derby looking to bounce back from last weekend’s shock defeat vs. Hannover 96 (the mid-week Pokal victory vs. Ingolstadt was nice, but doesn’t really count as far as restoring confidence). Also, with Jerome Boateng sitting out with a suspension and a vital Champions League match vs. Napoli following on Wednesday, this match will test Jupp Heynckes rotational strategy. Climb aboard.

Known “outs” are Robben (groin surgery) and Boateng (suspension).  Daniel van Buyten and Bastian Schweinsteiger were both sidelined with illness early this week, but both have returned to training and should be ready to go.  So, the back line will probably start as Lahm-Badstuber-van Buyten- Rafinha, with Contento the first guy off the bench as needed.

A more interesting question is who will start next to Bastian in the middle of the field.  Both Gustavo and Tymoschuk played in the Ingolstadt match, and both have been training all week.  My guess would be that Tymo gets the start, because (1) it would give Goose a rest ahead of the Napoli match, and (2) Goose can play CB in case of emergency (without Boateng, we’re limited as to backup CBs). 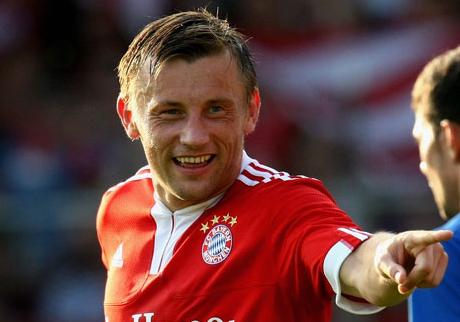 Up top, the now-standard 3-1 of Ribery-Kroos-Müller + Gomez would figure to get the nod.  But, again, with that huge Napoli match looming, it wouldn’t be a shock to see either Kroos or Müller get a rest - those two played against Ingolstadt - possible replaced by Alaba or Ivica Olic (more on him in a bit).

Nürnberg are the 1. Bundesliga’s all-time relegation kings, getting bounced from the top division a record 7 times.  But it must be said that they generally claw their way back quickly, and have spent a majority of their history in the 1. Bundi.  Most recently, they were sent down after the 2007-2008 season, but quickly won promotion at the end of the following season.  Interestingly, the three teams that won promotion that year, Nürnberg, Mainz, and SC Freiburg, have all stayed up since then, with Mainz even winning a spot in the Europa League qualifying last year.  Nürnberg’s highlight in recent years took place in 2007, when they seized the Pokal for the first time in over four decades.

This season, Der Club sits precariously in the 13th position in the table, although their record of 3 wins, 3 draws and 4 losses is respectable (thanks to Samrin for the correction).  Their last win in Bundesliga play came 6 weeks ago - in the subsequent 5 games, they’ve drawn 3 and lost 2, the lowlight being a 2-1 loss to previously-struggling Wolfsburg.  Nürnberg will be hoping to take strength from their own mid-week victory on the Pokal, although a 2-1 win over 2. Bundesliga side FC Erzgebirge Aue is probably not going to instill much confidence ahead of a match against FC Bayern.

The Beligan Timmy Simons leads Nürnberg with 3 Bundesliga goals this season, but perhaps their most dangerous all-around player is former Bayern man Markus Feulner.  The midfielder came up through the Bayern academy and has also played for Köln and Dortmund.  His brief spell at Bayern was before I was paying attention, so if anyone remembers him or has any particular details to share, let’s hear it.

- The match will be carried live on ESPN 3, but is not on the Gol! TV schedule as of now.  We’ll be here running the Match Day Thread tomorrow morning.

- Seriously, we’re going to get rid of Robben for Marco Reus?  Is that a joke?

- Ivica Olic has made some noise about his lack of playing time this week, stating that he is prepared to leave Bayern if he can’t get on the field.  This is a tough situation, because Olic played so great in the 2009-2010 season, and has worked so hard to get back after two straight serious injuries.  At the same time, Gomez has been lighting the lamp at an incredible clip recently, and the places where Olic can play (striker and wing) are all occupied with guys who are playing really well.

I guess my thoughts are (1) while his frustration is justified, I wish he hadn’t taken it to the newspapers, and (2) with three games in the next eight days, and vital matches against Dortmund and Villarreal later in November, Ivica might get something to sink his teeth into, making his complaints a little less urgent.  I wouldn’t mind seeing him get a start on the wing tomorrow, honestly - I think Müller has played in every game, and we could probably crush the Nürnberg defense with a front four of Ribery-Kroos-Olic + Gomez, or (even better) Ribery-Müller-Olic + Gomez.

Anyway, two Bundesliga Bavarian Derbies combined with a vital CL match give us a big week.  If we play well and get results in all three, we can put that Hannover loss behind us.  Thanks for reading.