When this year’s UEFA Champions League draw was first undertaken and FC Bayern found themselves in the toughest group, I thought that Napoli would be the least threatening opponent of Group A. Manchester City might not have the strength and depth that Bayern does, but they have a lot of talent and it was assumed they’d accord themselves pretty well. And Villarreal, while not the equal of Barcelona or Real Madrid, was seen as arguably the "best of the rest" club in La Liga. They had the firepower, with Borja Lavero, Rossi, and Nilmar, and they advanced as far as the semis of the Europa League last season.

Napoli, meanwhile, I considered a decent club that had suffered horrible luck in the group stage draw - sure, they finished 3rd in Serie A last year, but I figured that was more down to the struggles of some of Italy’s other traditional powerhouses (Juventus, Roma, Fiorentina) than to any real strength on the part of Napoli. Napoli was expected to struggle to score goals, especially on the road, and was given long odds to advance from Group A.

But in the last two months, the Azzuri have proven me (and other doubters) wrong.  Domestically, they lead Serie A with 10 goals scored, and sit only two points behind table-toppers Juventus.  And in the Champions League group state, Napoli trails only Bayern after drawing vs. Man City in Manchester and beating Villarreal 2-0 at home.  So tomorrow’s game at the Stadio San Paolo is vital: if Bayern can get a win, we would have had a perfect three-for-three run on the first trip through the group that would leave us sitting high above the fray on 9 points.  But if Napoli can get a win, or even a draw, they remain within striking distance and we have to sweat it out a while longer.

No official word from the club on a line-up yet, but I’m going to assume that Gustavo and Rafinha were held out of Saturday’s match to be fresh for this one.  That would give us Lahm and Rafinha at the back corners and Boateng and somebody at the CB spots (probably Badstuber, but manager Jupp Heynckes seems to genuinely like DvB).  I would guess that Bastian and Gustavo play together in the midfield, with our now-familiar Ribery-Kroos-Müller-Gomez 3-1 forward formation.

Ivica Olic gave a few good minutes off the bench on Saturday, so he’s ready should we need him.  Meanwhile, Petersen and Usami saw no action at all, so they’re theoretically full of energy if we need a late sub.  I hope Usami at least gets to dress for the match.

First of all, Goran Pandev is playing with Napoli these days.  FC Bayern fans should remember him well. 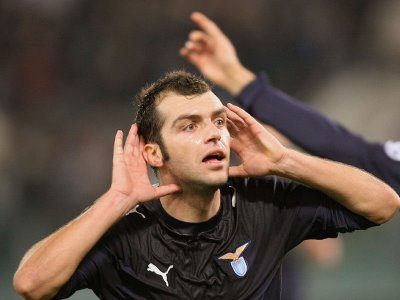 But so far this year, it’s been the Uruguayan Edinson Cavani doing the most damage to Napoli opponents.  In addition to leading the club with 3 goals in Serie A, Cavani has also scored in both Champions League matches so far.  You might also remember this guy as the one who scored against Germany in the third-place match in last year’s World Cup.  And if you don’t remember, you can be reminded about 12 seconds into this clip:

Napoli isn’t a big possession team, they controlled the ball for under 40% of the game in both of their previous CL matches (despite winning one and drawing the other).  They can quickly counter-attack if you let your defenders and middies creep too far forward.  A problem that Bayern has had in the past.  So I’m definitely hoping that Gustavo is playing in the middle of the field, as he’s more of a tough-tackling counter-attack-stopper than Tymo (in my opinion).

- As we discussed after Saturday’s match, standard Fox Soccer Channel isn’t showing this one in the States.  I’ll be watching it at the pub, and if anyone in DC wants to meet up, you can reach me at bayern.offside@yahoo.com.  Also, check back here right after the match for a recap and video highlights.

- It’s supposed to be sunny and warm tomorrow in Naples.  Also, Napoli’s stadium appears to be one of those race-track-around-the-outside deals.  Not really important, just trying to get everyone conceptually prepared to watch.

- If line-ups are confirmed or any other big news comes along, we’ll update this post, so stay tuned. Thanks for reading.