In Match 8 of the Bundesliga season. At this point, my weekly template looks like this: "Bayern comes in on a roll, with ___ straight victories and over ___ minutes without allowing a goal." So, this week, just fill in those blanks with 10 and 900. Hoffenheim is a decent opponent, with 12 points after 7 matches and a respectable +5 goal differential, so Die Roten will have to be alert if they’re going to keep the streak going.

Holger Badstuber returns for Bayern, having recovered from his battle with the flu.  Theoretically, this would put us back to our best-possible back 4 line of Lahm-Badstuber-Boateng-Rafinha.  But, with van Buyten playing well and both Lahm and Boateng having gone a while without a rest, it’s possible Jupp Heynckes will mix things up a bit. 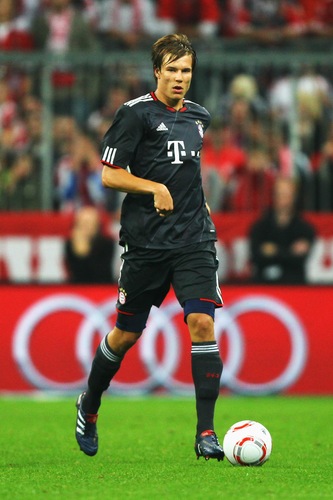 Doesn't he sort of always look like he has the flu?

Allegedly, Arjen Robben was a little dissatisfied with not getting into the game earlier on Tuesday.  Since he’s 100% healthy by now, I expect him to start, which likely means that Kroos will return to the bench and Müller into the second striker position.  Again, though, Heynckes has repeatedly stressed the importance of good rotation, so perhaps Müller or Ribery will get the afternoon off.

In my opinion, if Bayern is able to take an early lead, this would be a great chance to work Usami into the game a bit.  I’ve been hoping we’d try that for a while now, but he hasn’t seen much action.

Hoffenheim is apparently owned by some rich computer nerd named Dietmar Hopp.  I don’t think I ever knew that, but I did know that they’ve basically recreated themselves and improved dramatically over the past couple years, advancing from the Regional leagues into the 2. Bundesliga and then into the top division all over the past 6 years.  The quick rise up the ladder brands them as one of Europe’s more plastic teams, without the deep tradition of most of the Bundesliga’s other clubs.  Their stadium is brand new, and seats 30,000 people in a town of 40,000, so I’d say the reputation is probably deserved.  They don’t even have a nickname yet.  Any ideas?

On the pitch, Hoffenheim is led by former Stuttgart defender Andreas Beck, ex-Bayern scrub Edson Braafheid, and former Liverpool forward Ryan Babel.  I had no idea Babel is still just 24 years old.  They also have two German-born-but-one-American-parent players who are eligible to play for the USA senior side: Daniel Williams and Fabian Johnson.  No offense, Yanks, but you’re not exactly striking fear into FC Bayern fans.

Hoffenheim currently sits in 5th place in the Bundesliga table, so I guess you could argue that a win tomorrow would give us 3 points while also knocking back one of our competitors for the title … but that’s a pretty tough argument to make.

- The match will be broadcast live on Gol! TV, but probably with a Spanish announcing crew.  As of now, it’s not listed on ESPN 3, but sometimes they add games at the last minute.  We’ll update if that changes.

- Our weather forecast calls for clear skies and mostly warm weather.  Enjoy it now, boys, because winter is right around the corner.

- Finally, in some somber news, Breno was the subject of a hearing yesterday over the allegations that he intentionally set his own home ablaze.  Today, one of his fellow inmates said the player had been hospitalized as a suicide risk.  Clearly a sad situation, and our thoughts are with Breno and his family.  I’d be inclined to say “just give him his release if he wants to leave,” but that’s not going to be enough to solve the problem.  Whatever his demons are, I just hope that Breno can beat them and put together some semblance of a happy life - whether playing ball or not, and whether in Brazil, Germany, or elsewhere.