FC Bayern Munich confirmed on Wednesday that French star Franck Ribery will miss a month of action after sustaining an ankle injury in Tuesday evening’s victory over 1899 Hoffenheim. The ankle ligament tear will not require surgery according to Bayern team physician Dr. Hans-Wilhelm Müller-Wohlfahrt. If Ribery heals as expected, he will be in a cast for only 10 days, and will be able to begin rehabilitation in 3 weeks. 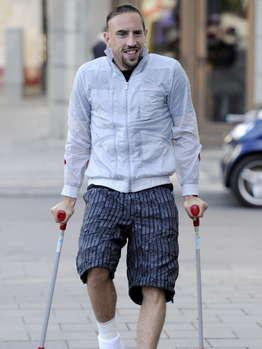 Reason to smile: Ribery's injury is less severe than feared.

Considering David Alaba has also recently suffered a similar ankle injury, it may be the Austrian youngster will be spending a lot of time over the next few weeks with his pal Ribery. The two seemed to have formed a special bond last season, after Alaba assisted on a Ribery goal in his 1st team debut with Bayern in February.