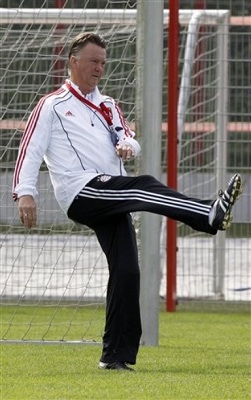 Another typical English Week starts on Tuesday night in Sinsheim, when 2nd place 1899 Hoffenheim hosts FC Bayern Munich. Kickoff is scheduled for 2 p.m. Eastern time. The match (or at least some portion of it!) will stream live on ESPN 3, but there will be no broadcast option in the US, with Spanish league matches taking precedence on ESPN 3. UK viewers will get live coverage via ESPN at 19:00 locally. Australian fans are encouraged to show new levels of dedication to watch the match live on Setanta at 4 a.m. on Wednesday down under. A Bayern Offside Fan Chat will be running here to keep everyone informed

Hoffenheim faces potentially complicated selection problems going into this one. Keeper Tom Starke is likely out, which will put Daniel Haas in goal once again. Haas, who played on Saturday against Kaiserslautern is not an inexperienced keeper. He started the majority of Hoffenheim’s matches in their initial Bundesliga campaign, and the club has allowed an average of 1.28 goals per match in his 25 career starts with them.

Of greater concern may be the possible missing men in Hoffenheim’s 4-3-3 attack. LM Sejad Salihovic is struggling through back problems, while striker Vedad Ibisevic took an ankle knock in the Saturday match that has left him below 100%. Neither appear to have practiced on Monday, bringing them both into doubt for Tuesday night’s match. The Icelandic sensation Gylfi Sigurdsson, who scored the tying goal in Hoffenheim’s Saturday draw is the likely replacement for Salihovic, while Prince Tagoe is the most likely replacement for Ibisevic. Hoffenheim coach Ralf Rangnick floated aloud the possibility of rotating in a couple of fresh players for the short week as well.

Though Hoffenheim hadn’t given up a goal from active play until this weekend, it’s probably a little much to say they have become a defensive powerhouse. After a strong overall performance in the opening match, they have gotten increasingly weaker at defending crosses as the season has progressed; it will be up to Bayern to try to get under them in the spots that Bremen and Schalke could not.

Until recently, the 19 year old Togo-born Mlapa was plying his trade at the Allianz Arena with 1860 Munich. A German citizen since childhood, he rejected overtures from the land of his birth to play with Germany’s U19 team, and made his debut in the U21 team earlier this year. The nearly 6′5″ Mlapa has started every game on the right of Hoffenheim’s triple-pronged attack this season, but is overshadowed by his better known attack-mates Ibisevic and Ba. I watched him play a terrific match for 1860 against Rot-Weiss Oberhausen last season, and the growing buzz around him is mostly deserved. The rare agility of a man his size will be a unique challenge for Diego Contento.

Louis van Gaal is probably benefiting from the hole he dug himself at the beginning of last season now, as the panic button isn’t being pressed with as much frequency in Munich at the moment. It probably helps that Magath and Schalke are a much easier target at the moment.

Nevertheless, I found myself agreeing right down the line with many of Van Gaal’s comments in his press conference. “We’re playing better than we were at this time last year”. Despite a grand total of 2 goals, I can’t disagree. “We must improve the corners..Badstuber has been the best so far”. Again, I can’t disagree, having seen just as little from Kroos and Ribery as everyone else.

But perhaps the most important thing Van Gaal said Monday was also the simplest: “Hoffenheim will play football”. And with whatever frustrations one has built up, one has to feel better about Bayern’s chances when both teams are actually trying to win a match.

No new injuries reported from Saturday’s squad. The only lineup change with some likelihood is the insertion of Demichelis in place of Daniel van Buyten. I don’t think this would reflect any change in the current CB totem pole, but is a bow to having 4 matches in 14 days’ time.

If Bayern keep scoring at the current rate, they will soon have accumulated more goose eggs on the scoreboard than Ribery did in his new contract. Patience is starting to wear a bit thin for Robbeneque heroics from Bayern’s best paid player. So often when Bayern is in a rut, it’s the superstar difference that changes the match. On Tuesday, Ribery is likely to face Tobias Weis and Andreas Beck when driving at Hoffenheim’s right, probably his toughest adversaries in a league match this season. Can Ribery rise to the challenge when his club needs him the most?

Hoffenheim has started this season as more of a first half team: 6 of their 9 goals have come in the opening period. Meanwhile, Bayern haven’t scored a first half goal in their last 4 competitive matches, and scored 57% of their Bundesliga goals in the 2nd half a season ago.

The clean sheets against Bremen and Köln marked the first time Jörg Butt kept back to back clean sheets in the Bundesliga with Bayern.

Though Bayern have only drawn twice in Hoffenheim’s Rhein-Neckar Arena, they have managed to win there–in the DFB Pokal! Last season’s opening round match against SpVgg Neckarelz took place at Hoffenheim’s home ground.

Possible starter Martin Demichelis scored his only goal of the season last year against Hoffenheim.

Toni Kroos had arguably his best match of the season at Rhein-Neckar Arena last season. Kroos scored one and assisted on the other two goals for Bayer Leverkusen in a 0:3 road win on January 24.

No matter how tired Bayern’s players may feel, I think clubs with mid-week match experience are always at a distinct advantage against clubs that are unaccustomed to it. I expect Bayern’s urgency to show through early, and while I don’t expect an end to end classic like the very first meeting between the clubs, I expect a more open approach from Hoffenheim to help generate the “luck” Bayern has been lacking.