The last two coaches to capture the Eredivise crown will steer the last two teams to capture the Bundesliga crown into battle Friday night in Munich’s Allianz Arena when FC Bayern Munich take on VfL Wolfsburg to open the Bundesliga season. The match will air live in the U.S. on ESPN Deportes and ESPN 3 beginning at 2:30 p.m. Eastern time. ESPN UK viewers will see live coverage at 19:30 locally; Australian viewers can be forgiven for adding a little espresso to their Weissbier, when Setanta Australia begins their coverage at 4:25 a.m. Saturday down under. Wherever you are on the globe, Bayern Offside will be along with a live blog, beginning half a hour before the match.

New Wolfsburg manager Steve McClaren may still be deciphering the German language, but it will be his progress in deciphering the tactics of the German league that will be put to the test in week 1. He does hold a trump card; having led FC Twente to the Dutch title last year will have brought him closer to understanding the Dutch footballing mind of a Louis van Gaal. On the other hand, he has chosen Pierre Littbarski as his lead assistant. Littbarski’s coaching career hasn’t quite had the sparkle of his playing career–his last coaching outpost was in Liechtenstein with FC Vaduz. Maybe we’re about to discover that the formula for winning the Bundesliga is bringing in assistants from Liechtenstein; but as a concept, it seems about as good an idea as bringing in a coaching staff full of Americans to a Bundesliga club….

McClaren has kept his formation and tactical preferences pretty close to the vest in the early season, so the set-up in last week’s Pokal win (which was played on the pitch equivalent of a Slip n’ Slide in downpour conditions) may be the only real evidence to extrapolate from. McClaren favored a 4-5-1 with all of the club’s new additions on display: Simon Kjaer (Palermo) and Arne Friedrich (Hertha Berlin) take over the central defense; Cicero (also Hertha Berlin) sets up alongside Josue in the central midfield; and Mario Mandzukic (Dynamo Zagreb) is the new threat on the left side of the midfield with Edin Dzeko playing alone atop the formation and Grafite starting on the bench. Here are the highlights from that match a week ago.

Going into this one, Wolfsburg have few injury concerns, but a big baby concern. While Makoto Hasebe appears to be the only injury casualty, it is expected that keeper Diego Benaglio, who played a superb World Cup, will miss the match to be with his wife as she gives birth to their first child. McClaren will then have to choose between youngster Marwin Hitz and veteran Andre Lenz, who allowed 3 goals to Bayern in Wolfsburg last season. Hitz has the edge, as he was the reserve keeper on the bench for the Pokal match.

There has been some local media speculation that Thomas Kahlenburg is mounting a challenge for Misimovic’s spot after replacing him in the 2nd half of the Pokal match; but that may be more of a sign that Wolfsburg is planning for life without Misimovic..

Most of the Best Feet Forward

With Bayern already missing Arjen Robben for an extended period, and Ivica Olic for an unspecified but significant period, the injury sheet didn’t need any additions. But almost on cue with my question about Mark van Bommel’s durability, a muscle problem threatened his availability for the match. Late reports indicate Van Bommel is fit, but we’ll see how effective he will be. With that said, I expect only one change from the Bayern 11 that face Germania Windeck on Monday; the insertion of Daniel van Buyten alongside Holger Badstuber in central defense. 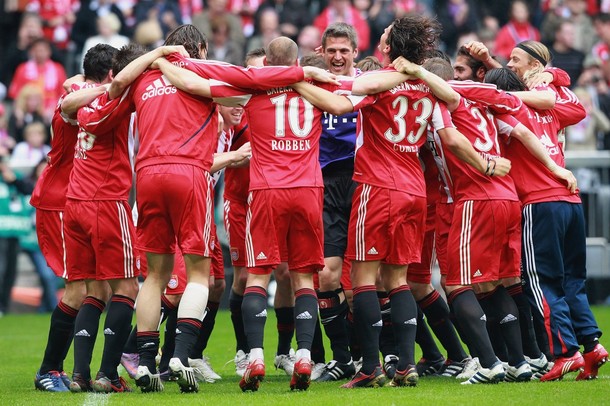 Let's do it again

For Bayern’s attack, it’s only logical that it will become more left wing dominant. Against Wolfsburg, this is an advantage. Though he may have just gotten his first call up to the German national team, Wolfsburg right back Sascha Riether has really never played well against Bayern. I look for a lot of early penetration down the left for Bayern, though a goal may only come when Wolfsburg start to over-rotate to the ball on that side.

*If Edin Dzeko scores on Friday he will move into a tie with Diego Klimowicz as Wolfsburg’s all time highest scoring player in Bundesliga play.

*If Miroslav Klose scores on Friday, he will pull even with Lothar Matthäus on the all-time Bundesliga scoring list with 121 goals.

*Wolfsburg have never won a league match against Bayern in Munich. FC Bayern have won 12 of 13 all-time home Bundesliga matches against Wolfsburg, allowing just 10 goals in the 13 encounters.

The expectations are strong for Bayern, and Wolfsburg come to the match in quite a similar situation to Bayern’s from a year ago. Early season calls are the toughest, but I don’t see the kind of potential for organization in Wolfsburg that Bayern showed in the Super Cup against Schalke. It won’t be without its close calls, but Bayern have a noticeable edge in this one.