Ekici Next on the Road to Nürnberg

Share All sharing options for: Ekici Next on the Road to Nürnberg 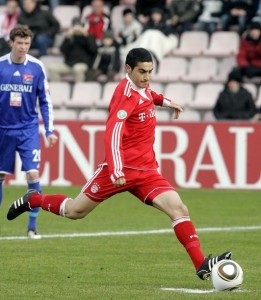 FC Bayern Munich announced on Friday that midfielder Mehmet Ekici will go out on loan for the entire 2010-11 season to neighbors 1. FC Nürnberg. At the same time, Andreas Ottl, who had spent the first half of the year on loan there, publicly stated that he would stay with Munich and fight for a position this season.

The move is the first act in what will be a necessary trimming of Bayern’s extensive midfield group. Having Ekici go out on loan is not a surprise to anyone as he had the least 1st team experience of anyone in the squad at the position. Meanwhile Nürnberg ought to benefit from a young player who could provide a bit more of a scoring punch, after ringing up a double digit goal tally in the 3. Liga last season.

Ottl’s intention to remain, coupled with some press of the last couple days indicate that Anatoliy Tymoshchuk may be closer to leaving than ever before. Frankly, it has seemed like one of these guys or the other is going to have to leave. Tymoshchuk is certainly at a point in his career where it makes more sense for him to move on–but we’ll have to keep an eye on this situation. Additionally, today’s news probably doesn’t change Jose Ernesto Sosa’s situation very much–expect him be the next one heading to the airport.