One for Captain Dutch

Share All sharing options for: One for Captain Dutch 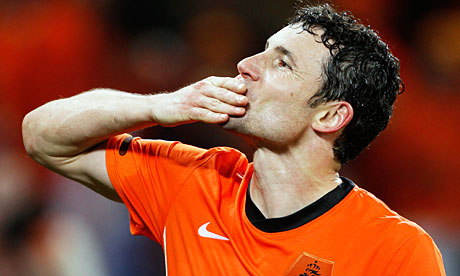 It's been a long time for me and I have happily sat on the sidelines watching Luke do an amazing job. I am glad that I picked someone that has as much passion for the blog as I did when I started. Unfortunately, real life things have sidelined me and I have been away. In my absence, Luke has done an amazing job and I am glad that he was willing to take on the role here at the Bayern Offside. We are honored to have you writing this blog for all the dedicated fans!

I have only come out of hiding to momentarily say a big congratulations to the Netherlands, Arjen Robben and my personal favorite, Mark van Bommel... Captain Dutch. By now, you all know the love I feel for this man and I have to say, seeing all the articles about him and his playing style have made me very happy. For once, they have something positive to say. He has done impressively well, receiving only one yellow the entire tournament - some may say abnormal by Mark standards, but he has become a leader and always does the best thing for his team. Even if that means he has to be the bad guy sometimes. He has a lot of heart.

On Sunday, the Dutch will take on Spain. David Villa, Iker Casillas, Xavi... the whole lot of impressive players. You can't discount Spain. They are tough and they are going to fight every step of the way. They are reigning European Champions and they are hungry for a World Cup win. However, you can't discount the desire and the heart that the Netherlands side has. No one thought they'd make it this far, let alone to the final match. Win or lose, they should be very proud of what they have accomplished. A win will just be icing on the cake. A beautiful story for them. I will be home, watching and hoping that my favorite Captain and his mates can bring the Cup home to their country. I have as much faith in them as the Captain does.

"Xavi and Iniesta are great talents. They are the best of their type in the world. But if we win this final we will have deserved it. No-one can deny that. People compare this squad to 1974 and 1978 but it’s not possible. The players and the systems are very different. But now we have the chance to realize the dream for our fans. We are in this game for the glory and no-one is thinking of defeat. But I would prefer to play a normal, ordinary game and still win. People didn’t think we could reach the finals. But I always believed. After losing the Champions League final, it was an inspiration for me to reach the World Cup final. For me to come back and win will be terrific. We are ready for a big battle. We will need to play our best match for two years to defeat Spain."
Source

You can bet, I will be glued to my chair, rooting for victory.