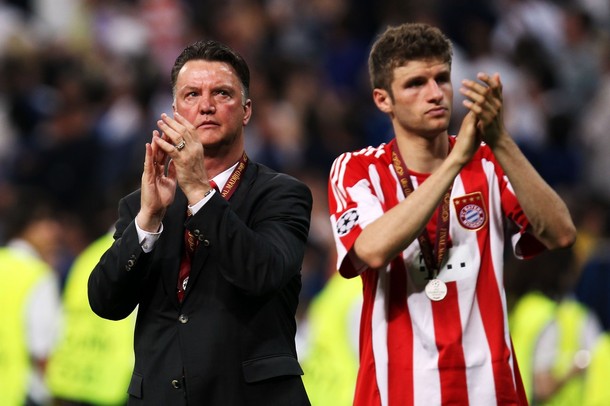 To Louis van Gaal: What you’ve accomplished by getting this team into the Champions League Final is astonishing. And it wasn’t luck. It took some time for both the players and the fans to have faith in what you are doing–but today’s result doesn’t diminish that faith in the slightest. Losing today feels like the beginning of something rather than the end of something.

To Hans-Jörg Butt: You have been an inspiration to anyone who has felt their chance to shine has passed them by. There are so many undeserved second chances in sport and in life-but yours doesn’t fall into that category. You may be from Oldenburg, but I won’t be calling you “Oldie” anytime soon.

To Arjen Robben: If you were wearing Nike shoes, your part in the commercial would have been something about Rogaine ceasing production–because bald is just too cool. What can I say that a great haiku doesn’t say? Only that the frightening thing is, you may not have peaked yet..

To Micho and Daniel: You’ve both had better days than today, but most of us can only imagine how hard you worked to make it back to the field after your injuries through the season. A shattered face, an eye swollen shut–we won’t forget what you were willing to sacrifice for victory.

To Holger, Thomas, and Diego: You’ve thrilled us, simply by not bothering to believe that you’re too young to be this good. But I hope this night has stung you worse than any match you’ve experienced-so that you digest it, and convert it to a fire in your belly for the coming years. We see visions of you when we sullenly look across the table to a friend and say “maybe next year”

To Philipp: Who must forgive this blog for never writing enough about him, because he’s so damn consistent. You represent the dream of being the hometown hero-may you and your bride-to-be make Munich your home, always.

To Bastian: For fulfilling the promise that everyone believed you had. Because if you hadn’t accepted your role, we wouldn’t have gotten this far.

To Hamit: For continuing to struggle on and fight for your place when many felt you were yesterday’s news. Now you can be a part of tomorrow’s headlines, and I hope you’ll stay and try to do just that.

To Ivica: For making motionless people around the globe exhausted just by watching you-for picking the entire team up with you whenever we fell to the greatest depths-I have no doubt you would have been Max Weber’s favorite footballer.

To Mark: For knowing what it takes to lift that trophy that we got ever so close to, and playing like it every time out; for going through an entire season without seeing red; for believing enough to stick around and take one more crack at it–we’ll be with you, all the way.

To Franck: For making the right decision. Now, start getting to work, there’s a lot to do..