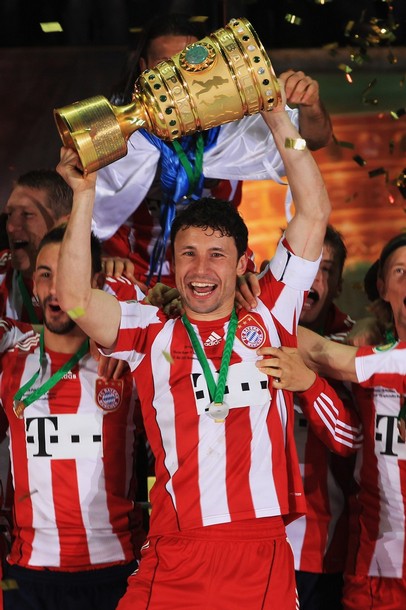 In a thoroughly dominant performance, FC Bayern Munich won their 15th DFB-Pokal by defeating Werder Bremen 4-0 in Berlin’s Olympiastadion. Arjen Robben, Ivica Olic, Franck Ribery and Bastian Schweinsteiger each scored a goal apiece as the team demonstrated their burgeoning confidence one week ahead of the Champions League final showdown with Inter Milan.

*Be happy: Not only did Bayern win in convincing fashion, we didn’t need extra time, no one got injured on a less-than-idea field and we had good performances from out good players and great ones from the greats. Although the chance that this was Franck Ribery’s last match for Bayern Munich remains, it seemed awfully hard to believe after watching the team chemistry tonight. 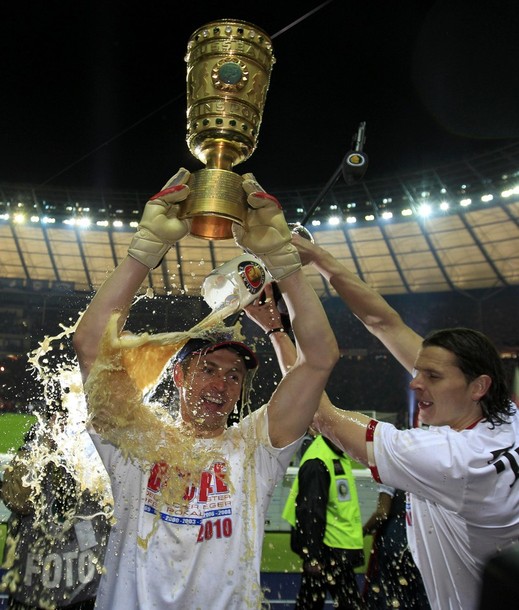 *Thanks for the memories, and for not scoring Claudio Pizarro. In the opening minute, he almost made Daniel van Buyten look like that unnamed New England Patriots safety in the ol’ Barry Sanders video in that other football. And for everyone else who has no idea what I’m talking about..Van Buyten looked really bad. Then Butt did more in 6 seconds than Neuer did in 90 minutes the other night.

*In many ways, it was a paint-by-numbers Bayern performance: A little slow, even a bit sloppy in the early minutes, and then gradual and systematic strengthening as the match went on. I like that we’ve added this “scoring in the 1st half” variant to it of late.

*You can’t really argue with Thomas Schaaf’s approach to this one; even if the strategy ran counter to Bremen’s natural inclinations as a team, it probably gave them the best chance to win. Commentators were surprised in Matchday 2 when Bremen took a very conservative approach in Munich, and came away with a 1-1 draw. That August match was quite a contrast to the thumping Bremen had dealt Bayern at the Allianz in 2008, but it was also seemingly out of character for the shoot-first, defend-later men in green. In Berlin, I think Schaaf was trying to replicate that August match, because Bayern had basically beaten Bremen at their own game in the January match in Bremen. The lopsided result looks like a total failure by Bremen; the reality is, that if Bremen had played a more attacking style for 90 minutes, they probably would have scored, but would have had even less of a chance of winning. The hand ball from Mertesacker was a bad break because Bremen’s approach was effective for the 1st half hour of the match. After the 2-0, Bremen had to play desperately, and as is often true for Bremen in that mode, they began leaking heavily at the back.

*Another nominee for best Martin Demichelis match of the season. Committed 1 foul, missed 4 passes all day. These numbers didn’t really stand out among Bayern players on a day when pretty much everyone played really well, but they’re great for Micho.

*Though many Bayern fans surely felt that Butt’s performance was indicative of a keeper prepared to play for Germany, Tim Wiese’s effort in knocking Robben’s shot from distance over the bar in the first half might have been the save of the night. A neutral had to come away with the feeling that despite tragedy and injury, Germany’s keeper corps is in good form.

*Schweinsteiger scored only his 2nd goal of the calendar year, and his first Pokal goal since the January 2009 drubbing of Stuttgart. Let’s hope he’s put the Pfosten blues behind him.

*Robben’s penalty was the 2nd he’s scored in the Pokal, and his 4th on the season.

*Bayern had previously scored 4 goals in a Pokal Final on three occasions: 1966 against MSV Duisburg, 1967 against Hamburger SV and 1982 against 1. FC Nürnberg.

*It was a bit unusual to have 4 different goal scorers and not have Thomas Müller be among them. He did have his chances in the first half, but failed to convert. Müller will have to settle for sharing the honor of Pokal scoring champion with Lucas Barrios of Borussia Dortmund and Sahr Senesie of Eintracht Trier. All three men scored 4 goals over the course of the tournament. Bayern now have the Pokal scoring champions from the last 3 seasons on the roster: last season Ivica Olic shared the top spot with Edin Dzeko; two seasons ago, Mario Gomez was the top man. 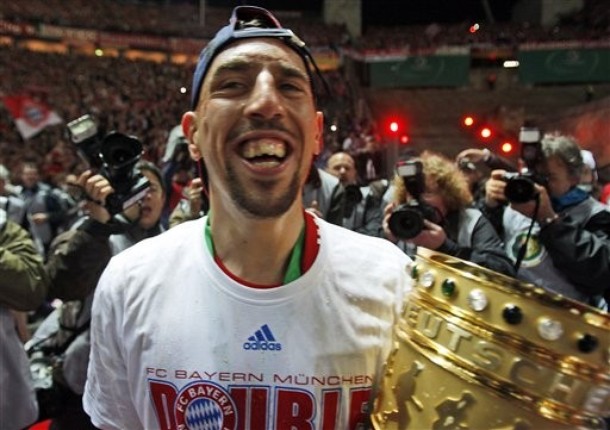 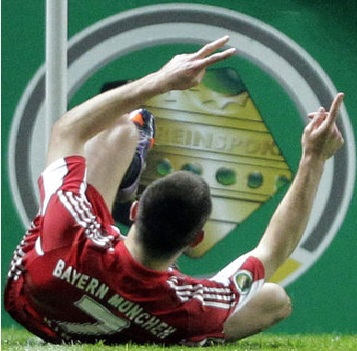