The First Sip From The Cup

Share All sharing options for: The First Sip From The Cup

In 1957, FC Bayern Munich were far, far away from being the European football power they are today. Sure, the club had won the German championship in 1932, but after the politically-instigated purges that soon followed and the struggle to reconstitute the club after the war, the future did not seem bright. The club spent much of the 50’s looking up the table at the likes of Nürnberg, Stuttgart, Frankfurt and even 1860 Munich. In 1955-56 the club had played in the 2. Oberliga Süd, having been relegated there after a 16th place -34 goal difference performance in 1954-55.

So it was definitely uncharted territory for the Reds when an extra-time victory over 1. FC Saarbrücken put them into their first DFB-Pokal final in 1957. Bayern would be underdogs against fleet-footed Fortuna Düsseldorf, but at least would have a bit of a home field advantage: in that year, for the first and last time, the Pokal Finale was played at the Rosenaustadion in nearby Augsburg.

The match was in the right place for FC Bayern; and as luck would have it, the right time as well. In that particular season, the Pokal-Finale was played on December 29. When the teams took to the pitch, little if any green was to be seen: an overnight storm had blanketed the pitch in snow. Much as a wet pitch in Bern had helped the DFB-Elf just a few years earlier, a white one would help FC Bayern.

Over 40,000 mostly-Bayern fans braved the elements to root on their team, and the emboldened Reds controlled the match from early on. The talented Düsseldorf keeper Albert Görtz kept his team in the match with a number of fine saves, and at the half it was 0:0.

As the last quarter-hour approached, the match remained scoreless. Then in the 78th minute, Bayern’s Rudi Jobst struck. Bayern ran out the clock and hoisted their first Pokal after an improbable 1-0 victory. It would be nearly a decade before FC Bayern Munich would win the DFB-Pokal again, and a longer wait still for a German championship. But the first taste of glory changed the club’s course.

Slowly, as the decade came to an end, the club worked its way into the upper echelon of the Oberliga Süd. The club was never relegated again; a kid from SC Munich ‘06 got into a scrap with some 1860 Munich players and decided not to join them the following season; another kid from Nördlingen signed a Bayern contract thinking he’d signed one from 1860. But maybe, just maybe, all that luck began on a snow-covered pitch in Augsburg a few years earlier…

The coach of that first Pokal winning side was Willibald Hahn. In a long coaching career, it was the only trophy he would ever win. A few months later, he would change course in a manner which was echoed half a century later: he became the Swiss national team coach. In January 2010, Willibald Hahn celebrated his 100th birthday. Living history indeed. 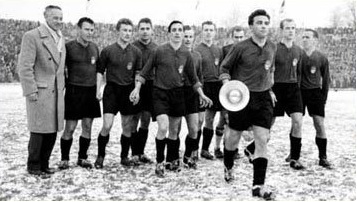