For those of us in the English speaking world, our Bundesliga match commentaries often come from Sportcast’s English commentators, stationed in Germany. We’ve become familiar with the voices over the years, but now it’s time to get to know one of them a little better. Phil Bonney will have the call on Saturday for the FC Bayern-VfL Bochum match. Bayern Offside had the chance to talk with Phil about what goes into bringing the Bundesliga into our homes around the world. I think you’ll agree, he’s as entertaining in print as he is on matchday..

Bayern Offside Well first off, I think it would be good to fill in a little background. So maybe you could let us know where you hail from originally, what brought you to Germany and how long you’ve been doing the commentaries for Sportcast:

Phil Bonney: I was born On Halloween night 1964 and brought up in Southampton, (I’m a die hard supporter of the Saints – we’re 3rd div at the moment but we’ll be back!!) on the south coast of England until the age of 19, then I moved to London to follow my dream of becoming an actor, I spent three years at The London Academy of Music and Dramatic Art (one of the UKs best Drama schools) and afterwards I worked as an actor around the UK until I moved to Cologne, Germany with my wife, who was brought up here, in 94. (Incidentally my first flat in London had a great view of Chelsea’s Stamford Bridge ground, today the building is part of the "Chelsea Village",but in those days (84) it was a block of flats and I could see the whole game from my bedroom window!)

The reason for the move was a job offer that my wife got to work as a presenter for German radios world service broadcaster Deutsche Welle. My career was stagnating a bit so I thought why not? Learn a new language and see how it goes. On moving to Germany I started out as an actor and stage fight choreographer (which I still do) and then increasingly got more work as a "voice-over artist" and in the great tradition of these things, in 2002 I think it was, I was in the right place at the right time. The Legendary Toby Charles (whom I worked with on voice overs) approached me and asked me if I was interested in commentating – after approx .00000000001 of a second I said yes and the rest is history as they say! 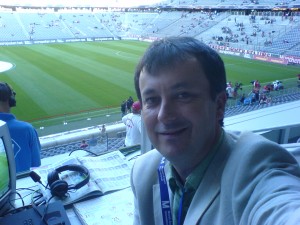 I have always played football and it is a deeper love than the love I have for the theatre. I wanted to act from about age 12 but have played football for as long as I can remember. Sadly for me I was always one of those who made the first team but was left on the bench a lot, then at 15 I had (my first of three) cruciate ligament problems so any kind of sport career was out. I still play regularly though, at least once a week. I think it’s quite important that a commentator should know what the players are trying to do even if they can’t do it themselves. Nothing annoys me more than a commentator who has obviously never played at any kind of level who says "ooohhh what a wasted chance he should have done much better". When I’m thinking "it was amazing that he even made contact with the ball it was such a difficult chance!"

Bayern Offside: To my ear, your voice always brings out the electric mood that is a hallmark of German football stadia. Yet, you do all your commentaries from the studio in Cologne. Is it difficult to sort of parallel that mood in your commentary while being removed from it?

Phil Bonney: To be honest I get the technician to crank up the crowd noise to eardrum bursting levels so it feels like I am in a particularly rowdy section of the crowd I think that helps! It gets the adrenaline flowing and always gives me a lift. My acting background may help a little too. And of course like your readers I love good football so it’s easy to get in the mood if the football is good. The hardest games are the ones where nothing happens on a rainy Friday night! (Nil-nil Phil as my colleagues would say).

Bayern Offside: I’ve always wondered: How big is the studio you’re in to do the commentary and how big is your monitor? I’m guessing it’s not exactly the bridge of the Enterprise.

Phil Bonney: The Studio is nearly as big as a prison cell and the TV is HD but only a 22" screen. 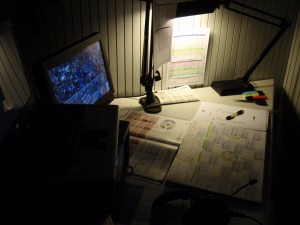 Phil isn't kidding. Here's his vantage point for the broadcasts. So don't feel so sorry for yourself the next time you're fiddling with a non cooperative computer to catch a match.

Some team’s away shirts make them virtually impossible to identify! But then I think…If I can’t tell who they are then, hopefully, neither can the majority of the people at home so I make an educated guess!


Bayern Offside: If you could, take us a bit through how you typically prepare for a broadcast.

Phil Bonney: Well it’s kind of an ongoing thing – On Monday I buy the bi weekly publication "Kicker". On Wednesday I get Sport Bild another weekly magazine and on Thursday I get the 2nd Kicker and I read them all nearly cover to cover on the day of purchase. Throughout the week I troll through the internet for interesting stuff (hopefully The Offside!) and of course watch any CL or EL games.

Friday is "holy" from a preparation point of view and is where the bulk of my research is done. I collate my info and print out certain stats that I get from the "Opta" company. We get to the studio an hour before kick off and have a team meeting about what will go into the highlight show that we also have to produce and then I set up my work station and look forward to the kick off. And of course I make a check for any breaking news on the day of the games!

I also have my laptop running in the studio during games with more info on. Again I think my acting training helps here with remembering the stuff I have read.

Bayern Offside: I watch the matches live in the early a.m. from the U.S., so I have a halftime breakfast ritual. Do you have any halftime rituals when calling a match?

Yes not very exciting though:

1: I prepare my board for the 2nd half -yellow cards goals etc

2: Get a coffee or diet coke

4: Chat to the control room guys about the game/other score lines

6: And somewhere in the above list I go outside to stem my nicotine craving

Bayern Offside: What was the best match you’ve covered this season?

Phil Bonney: Hard to say, but I think the 3-2 win for Bayern at Bremen on MD 19 must be up there – real end to end stuff and no time at all for the statistics and small talk- had me on the edge of my seat the whole game.

You can tell good games from the lack of stats I give out!

Worst moment for me overall was last season commentating on KSC – Köln when Cologne’s Captain, Umit Özat, collapsed during the game – a real "gulp" moment. You hope you will never have something like that to commentate on but it can, and does, happen.

Phil Bonney is a Bundesliga commentator for Sportcast, and will have the call for Saturday’s FC Bayern vs. VfL Bochum. Check the Bayern Offside before the match tomorrow to get Phil’s take on the match he’ll be covering on Saturday!