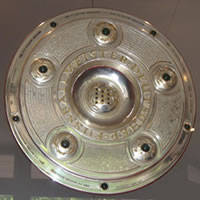 The final home match of the season brings with it the opportunity to clinch FC Bayern Munich’s 22nd German championship when they take on VfL Bochum on Saturday. The match kicks off at 9:30 a.m. Eastern time. Setanta will have the match live at 11:25 p.m. Eastern down under, but the UK gets the regular 21:45 delayed showing. In the U.S. and Canada, GOLTV will have the live coverage, and you may also be interested in visiting our Bayern Offside live blog for virtual split-screen coverage.

Bochum, sitting 16th in the relegation playoff spot, decided they would were desperate, but not quite as desperate as Bielefeld last season, so they fired coach Heiko Herrlich with a full 2 matches left instead of just 1. Darius Wosz, a former player for Bochum and current amateur coach takes over. This article from 11 Freunde (translated) is about as in depth as you’re going to get about him on short notice. The fact that he models himself after Peter Neururer, who I think of as the Professor Harold Hill of coaches, means he probably won’t be around long…unless he finds away to engineer a legendary win at Munich.

But the numbers and the results don’t seem to provide a lot of hope. For starters, they’re on 238 minutes without a goal. They’ve won exactly 1 away match in the new year–it was their very first, against ‘Gladbach on January 16. They’ve lost 7 of 8, with only a draw against Freiburg to break up total nosedive.

They’ll be without Christoph Dabrowski for sure, and probably also Diego Klimowicz. They will however have Schalke’s young gun Lewis Holtby, who came over on loan in the winter. But even Holtby has only managed two goals in 12 matches for Bochum. With a new coach in place, it’s difficult to know exactly what lineup changes he’ll make. Does Wosz really think Bochum have a chance going headlong for goal against Bayern? Or will he drive the tent-stakes deep into the area of the Allianz Arena, ensuring that Bochum do 90 minutes of camping in their own end? They do need to be careful–they will play Hannover on the final match day, which should give them a chance to survive with a win there, but Maltritz, Pfertzel and Sestak all have four yellows. That’s advantage Bayern. Bochum appeared to lineup in a 4-3-3 last week against Stuttgart, and actually the numbers show they were ineffective but not awful. So, an aggressive posture could have some effect. Bayern will want to limit the set piece chances for Bochum; Christian Fuchs’ 3 goals on the season have all come via the set piece.

The Bayern players are all saying the right things this week, but you’ve got to feel that they’re still riding the euphoria of making the CL final. At least one really positive report came in: everyone is fit. So, you’d have to expect you’ll see the best 11 out there, although the only real question becomes what will LvG do with the backline? Given that Bayern will probably have the luxury of not needing to make true strategic substitutions in this match, it might not really be a big deal who starts. I’m thinking he’s actually going to go with Lahm-Van Buyten-Demichelis-Badstuber, but will rotate Contento in at some point in the match. But, I’ll also say this: if Badstuber is the odd man out of the starting 11, I think he’ll handle it a whole lot better than Demichelis might. I think Holger understands that his future is in that starting 11, and starting from the bench in a match against Bochum isn’t going to change that.

Bayern will be debuting their new kits for the 10-11 season on Saturday, so this will be your chance to see if you really want to buy one. And if you happen to be looking for some end-season kit bargains, the Offside Store is a good place to start

I frankly don’t think Tuesday’s match in Lyon was the kind that has a fatigue-carryover to the weekend. Bayern will be fresh, and now they will just have to be focused and unified. There may definitely be some slow moments early on, but this team simply won’t allow points to slip against an inferior opponent at this point