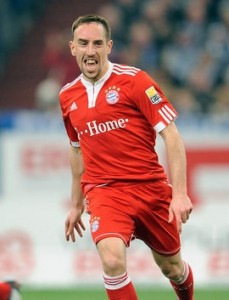 FC Bayern Munich, a team that has won most all of its matches this season but out-shooting, out-pressuring and out-dazzling its opponents was forced to rely on out-defending in order to gain 3 essential points against Schalke 04 on Saturday. With the victory, Bayern move back atop the Bundesliga by a single point.

With or Without You

On Friday, the Bayern Offside kept on top of the story surrounding Arjen Robben’s absence from the match, so readers were not shocked to find the Dutchman nowhere in evidence on Saturday. Hamit Altintop started in his place, with an opportunity to become the hometown hero-turned-villain. But it instead, it was Altintop who was also quickly nowhere in evidence, after earning two yellow cards in 41 minutes. I don’t think it’s really disputable that Altintop earned both warnings. I’m not convinced that Altintop really meant to push the linesman though, which earned him the first card. On the other hand, Marcelo Bordon would have seen two cards in the first half on a lot of other days. Overall, it a day of a lot of close calls from the referee–and there was certainly a question of offside on Bayern’s second goal.

Ribery and Müller’s Lou Christie special was especially fun to watch, considering it that rare Bayern scoring punch in the first 1/3 of a match. I don’t know if Bayern still think about buying Rafinha, but I’m guessing Magath is a lot closer in his thoughts of selling, especially after that play. And kudos to Olic for managing not to go for the glory on the 2nd one.

After having little success in the Pokal match with legitimate runs, Jefferson Farfan seemed to decide he would try falling into defenders, hoping to draw foul calls. About 20 minutes in, a collision between Van Buyten and Farfan, where no whistle was warranted, ended up injuring Van Buyten, and Demichelis had to come on in his place. I don’t really buy the notion that Demichelis was on the bench because of his rocky start on Tuesday. I think Van Gaal saw enough in Contento’s performance in the Pokal to feel confident, and Micho probably didn’t meet Van Gaal’s standard of fitness to play 180 minutes in 5 days. But now, Van Gaal was forced to reach for the red phone, and Demichelis responded in the pinch. It was one of his top performances of the season, and Holy Micho fans, we might just have an improving, confident Demichelis available to us. At this writing, there was no news on the severity of Van Buyten’s injury.

Come On, Get Happy

And a word or two here about Contento: he started the play on the first goal, even if Schweini was the true playmaker, heading the ball right into Ribery’s wheelhouse. Contento’s offensive potential has been muted for the most part, because of the ever changing cast of characters on the left side of the field as well as the caution used in his approach to defending. Today it was even more muted by Schalke’s relentless fouls on him. But it is undeniably there. He had one nice 2nd half run, and with 11 men, it might have been supported nicely. That Contento could put in a solid performance in a match of this magnitude shows how Bayern are skillfully balancing short and long-term ambitions, and I for one don’t think it is simply out of necessity. Although a player like Braafheid might have been ok today, putting Contento through trials like today will ultimately pay dividends in big matches, years down the line.

I thought Mark van Bommel stepped out pretty far in some of his pre-match comments concerning Schalke. That was classic bulletin board stuff, but the man backed it up on Saturday. Van Bommel connected on 89% of passes, and was the vanguard of the 10-man wrecking crew which allowed precious few balls through to bother Butt. Maybe lucky to dodge a card, but it was the least Grafe could do. Although the team certainly suffered a panic attack for the remainder of the first half after Altintop was sent off, they were all cold-steeliness in the 2nd half, and Van Bommel led by example.

*I love how Magath always seems to be having a conversation with the Great Gazoo. Surely the camera angle sometimes fails to show a nearby official, but often times, he seems to direct his protests at the empty space to his left. I really don’t remember him doing that in Munich, but then again, he had less to be upset about.

*Leverkusen’s loss at Frankfurt combined with Dortmund’s win against Bremen has really opened up a battle for the 3rd place spot. Not sure if Leverkusen is looking back, but BVB is indeed, gaining.