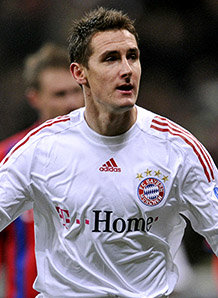 FC Bayern Munich fought back from 1:0 down to gain a hard earned point in Mönchengladbach on Saturday via a goal from a recently unlikely source: Miroslav Klose. However, Schalke 04 got a late goal of their own in the capital to defeat Hertha Berlin 1:0. The results mean that Bayern and Schalke are now level on points with two matches remaining in the season. Bayern maintain the top spot in the table on goal difference.


Because I’m under a personal time crunch today, I have to do this really rapid fire without a lot of analysis or chance to look at certain plays again–so here we go:

*Would be glad to hear from readers who saw something different, but to me, I thought the ref blew the call on the backpass to Butt–I don’t see how that wasn’t an indirect free kick in the area for ‘Gladbach. The only wiggle room I can see is the interpretation that the pass wasn’t directed to Butt (but it pretty surely was). I don’t have time to look at that part of the match again, but that seemed a big break for Bayern.

*Demichelis, never one to leave well enough alone, tested Butt with another backpass a bit later in the first half–Butt showed every indication he was going to catch it..then seemed to remember the incident earlier and awkwardly used his chest to try to clear the ball.

*Marco Reus is everything you hear he is, and he really made up for missing a golden chance in the first half with the goal he scored to put ‘Gladbach ahead. A possible holy terror for Germany at Euro 2012? Believe it.

*Excepting Robben, a pretty poor effort from the midfield today. Ribery was especially ineffective, and the facepalm- inducing tap to Pranjic on the last free kick pretty much symbolized the day. Schweinsteiger had some nice efforts on goal, but was not quick enough to the ball in many instances.

*It’s unclear if Louis van Gaal was planning to sub on Contento at half or if the non-reported but apparent (if you’ve watched him the last 2 matches) injury for Demichelis caused him to have to come off. If it was a planned substitution, it totally blew up in LvG’s face as Van Buyten took a knee knock right on cue, forcing Tymo on as emergency CB. You’ve got a terrible situation now in that both CB’s are banged up with the match of the season 3 days away. Just when the roster size debate seemed to be at an end, you have this. The plus side: Badstuber who alternated between looking slow and looking lazy and Tymo actually were ok together at a point in the match where all the momentum was with ‘Gladbach.

*Using Klose and then having him score was pretty Hollywood. There is obviously going to be a lot of frustration with this result, but Klose has scored the most important goal of the year here. The goal difference advantage over Schalke (now 13 goals) is insurmountable. If you can’t beat Bochum and Hertha under pretty much any circumstance, you probably don’t deserve the Meisterschaft. If we’re lifting the salad bowl in two weeks, it was this goal that sealed the deal and kept us on course. So, remember your forgotten man…

*Also not to be forgotten–Lahm, wearing the armband and providing the leadership through example, serving up Klose very nicely indeed.

*Contento earned a 9.9 in artistic impression from the Italian judge for his mid-air somersault in the dying moments. He got up holding his knee, leaving open the possibility that we’ll see an entirely ramshackle back line in Lyon.

*Overall on the day, it just seemed as though the team were out of sync. Yes, there were long stretches where ‘Gladbach decided to lie deep, but very few crosses connected for Bayern, there was little synergy. Even though I could see the danger in this match given much of the data I put forward in the match preview, I found it hard to foresee the team struggling this hard. I suppose they are feeling about the same way.