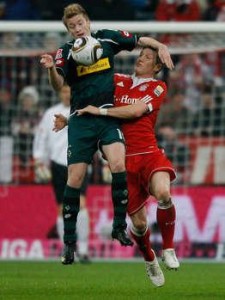 FC Bayern Munich will get up close and personal with Borussia Mönchengladbach on Saturday, hoping to protect a 2 point lead at the top of the Bundesliga table. ESPN 3 and ESPN Deportes have the live coverage, beginning at 9:30 a.m. Eastern. Bayern will want to improve upon their last visit to Borussia Park in November of 08, where a woeful defensive effort late allowed the home team to score two goals in the last 11 minutes and steal a point.

‘Gladbach’s 12th place standing in the table is a bit deceptive when evaluating the ease of achieving 3 points at Borussia Park. Their 8 home wins on the season are more than Bremen, Hamburg or Wolfsburg. Their 23 goals at home puts them 9th in the league in that category, and 6 of the 8 teams ahead of them have played an additional home match. Undoubtedly, it is their league-worst away form (2 wins), that has been the key factor lackluster position. Perhaps no stat better indicates the Jekyll/Hyde nature of ‘Gladbach home and away form than goal difference: At home, +3, away, -15

There’s been something of a scoring drought for ‘Gladbach as they have only managed more than 1 goal only once in their last 8 matches. Still, they won their last two home matches and both of thos were against teams that have beaten Bayern this season, HSV and Eintracht Frankfurt.

Karim Matmour will be suspended for this match after his 5th yellow last week, but Canadian forward Rob Friend will be available again for coach Michael Frontzeck. This will probably mean slipping Marco Reus back to his familiar spot in the right hand side of the midfield after a couple cameos higher in the formation. LB Filip Daems is a question mark, as he is currently fighting the flu. The Bundesliga website has a nice interview conducted in English with ‘Gladbach’s American midfielder Michael Bradley. But somewhat illogically, they have only posted it dubbed into German on the German section of the site. When/if they they get it on the English site, you’ll see it here.

Neither Bayern nor Bayern Offside readers are likely underestimating ‘Gladbach. In the first match this season, ‘Gladbach looked the better team for much of the first half, and it was only Badstuber’s precision free kick from distance that saved the day and the full points. For that as much as any other reason, nearly 2/3 of you polled last week indicated that this would be the toughest of the remaining four league matches for Bayern. Arjen Robben, recounting his frustration with being substituted out late against Lyon, indicated that Louis van Gaal told him he may also need to score against ‘Gladbach.

Concerning Frank Ribery’s red card, on Tuesday it was announced that UEFA will only make a decision whether Ribery will face suspension for the final after the 2nd leg in Lyon on Tuesday. Ribery did not play against ‘Gladbach earlier in the season, and it’s difficult to imagine how his “week from hell” might culminate. Opinions at the moment abound on the nature of Ribery’s character, but this match should tell us an awful lot about his sporting character at least.

Bayern come into the match with Mark van Bommel suspended for his 10th yellow card a week ago against Hannover. As on Wednesday, Danijel Pranjic should be the fill-in next to Schweinsteiger. The other selection questions concern the two players who scored for Bayern in the Hinrunde match against ‘Gladbach. There was no report on Holger Badstuber’s fitness level on Thursday, so it was unclear if he will resume at LB in place of the rapidly improving Diego Contento. The question could be whether Louis van Gaal wants to start with Gomez and Olic up top and use Thomas Müller as a sub, as he did against Bayer Leverkusen. Despite scuffing his finishes against Lyon, Müller looked more energetic than he had in recent weeks, and a bit of additional rest may be in order, especially because Olic and Gomez both saw limited action on Wednesday night.

On Saturday at 9:30 a.m. Eastern, Schalke 04 will visit Hertha Berlin. The Bayern Offside Twitter feed will keep tabs on that one.

I think this will be a very competitive match–but not for 90 minutes. Reus and Arango are playmakers who showed they could give Bayern trouble, and a fast start is not out of the question for ‘Gladbach. But Bayern will be relatively fresher than expected for this match, and simply have too much quality. Don’t expect ‘Gladbach to lay down like Hannover; do expect Bayern to keep on rolling.