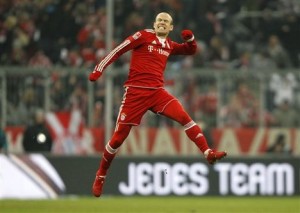 The week-in week-out superlatives don’t seem to be enough to describe the heroic and amazing deeds of FC Bayern Munich’s #10, Arjen Robben. I could do feature-article type writing, or a detailed statistical analysis or even a bang-for-your-buck transfer story and none of them would really quite capture the “Robben moment” we’re living in. And so I have decided to start the Arjen Robben Haiku Contest here, to try to see if we can find that perfect expression of Robbeness. The lucky reader who submits the winning haiku will get a better-than-Cracker Jack prize.

I think I’ve heard of it, but what’s haiku?

Haiku is a major form of Japanese verse, written in 17 syllables divided into 3 lines of 5, 7, and 5 syllables.

An interesting piece of trivia is that the earliest known westerner to write haiku was actually a Dutchman named Hendrik Doeff. So there’s an obvious connection there, plus I think it’s a pretty accessible form for most people.

Forget it, I don’t know how to write haiku

Oh come on! Check out this guide to writing haiku or just use Google, there’s a lot of resources out there.

1: Submissions may be in any language, but if it is written in something other than English or German, it will be helpful to provide a translation, if possible.

3: All submissions should be emailed to me using the official Bayern Offside email listed on the side of this page: bayern[at]theoffside[dot]com Please don’t post them in the comments (there’s a reason for that, keep reading).

4: Luke and a panel of verse experts and/or people who happen to be in his kitchen will whittle down the submissions into a group of finalists. Readers will have the opportunity to vote for their favorite, and this vote will determine the winner. Finalists are asked not to identify their haiku on the site during this final phase, though they may identify themselves as finalists. The idea is, we’d like to have the work evaluated on its own, and not simply by who wrote it.

5: You may submit as many as you like, but if you’re sending me 25, I’m going to start questioning your sanity. This is only fair, since you’re questioning mine for thinking up this contest.

6: The winner will be announced at an as yet undetermined date in May. A lot depends on how many submissions we have. I’m shooting for halftime of the Pokal-Final, but we’ll let you know more in the next few weeks.

7: THE PRIZE. Yes, there will be a prize. No it will not be a cash prize, or an all-expense paid trip to the World Cup or the Bundesliga opener or something. But it will still be pretty cool. I’m not going to tell you what it is now. But let me assure you, it’s totally going to be worth your time and effort.

Questions? Use the comment section, or the email address listed above.