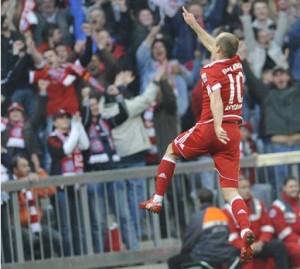 Loyal fans who had waited all season for FC Bayern Munich to show something of the dominant form against inferior opponents of past years were rewarded for their patience in spades on Saturday, with a famous 7-0 victory over a beleaguered Hannover 96 side. The lopsided victory represented the biggest win in a league match in the history of Allianz Arena, and may have permanently removed the illness-inducing memory of a 1-0 loss to Hannover on the same pitch in late 2006, a match that signaled the end was approaching for Felix Magath in Munich. With Schalke winning and Leverkusen losing, Leverkusen is virtually eliminated from the title race. Bayern maintains a 2 point lead at the top of the table with 3 matches remaining.

*I could really start every match recap with flowery, glowing praise for Arjen Robben. His first goal of three on the day was much more difficult than it looked, somehow getting the left footed touch on the breakaway just right, as he always seems to do. Somehow, expectations never seem to be too high for Robben. We can never know when the next disappointment or the next injury might be. On days like today, it’s important to cherish this man’s singular ability, each in his or her own way. So raise a glass, get out and kick a few with your kid, or just keep clicking the replay on those goal videos–he’s not just our man, he’s the man.

*What an oddity it would have been if Franck Ribery had scored with the header opportunity he had in the first half. I’m not going to bother to look it up, but I highly doubt Ribery has ever scored on a header in the Bundesliga. Beyond that, he was simply oddly disengaged from the proceedings in this one.

*It’s not just the scoring statistics that will astound you in this match–the passing stats are amazing to behold as well. The entire backline was superb in this respect, and really didn’t revert to occasionally scary form until garbage time, i.e. after the 6-0.

*Somewhere out there, someone who has absolutely no idea of the relative strength of teams in the Bundesliga made a correct score prediction. You just won’t see too many scorelines like this not involving Bremen these days.

*Feel any sympathy for Hannover 96? It’s hard not to, when you think about what event had the biggest impact on their season, seeing those big white 1’s in the center of their shirts. But I’m still surprised that they didn’t bring more to the table today. I’m not providing any earth-shattering insight to say that that’s about as close to giving up as you’ll see any relegation-battling team play. On the comparative performances in Munich alone, Freiburg, a team I would rate as significantly less talented than Hannover ought to stay up. 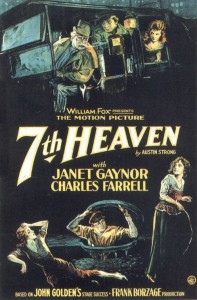 Almost as good as Bayern today..

*Greatly encouraged to see Diego Contento serve up the first goal for Olic. Frankly, I think we’ve got ourselves a long-term left back in this kid. There may be bumps in the road and inconsistencies ahead, but you can’t teach his kind of offensive instincts. I think there’s been a marked improvement from him since his debut.

*Two negatives on the day: first Mark van Bommel’s 10th yellow of the season, which will put him out of the ‘Gladbach match. We won’t see our captain again until we visit Lyon, but there was no doubt on that card, which once again some would argue deserved straight red. The other was Martin Demichelis moving gingerly in the final minutes of the match. With Badstuber out the first leg against Lyon, this becomes a possible injury that one really has to scrutinize.

*A first half foul from Steve Cherundolo probably would have gotten a red if he had been playing for Fiorentina in the Champions League, but here was met with a stern warning. It probably looked worse than it was due to his height, but the first-time referee did not keep very good control of the match in the early going. After Van Bommel earned his card, everyone seemed to realize how far they could go before one would be issued, and the hack jobs calmed down a bit.

*What is the ideal win going into a Champions League semi-final? Is this it? Or does a 7-0 win give a team too big of a head? I’m not too worried about it, because I think Louis van Gaal can shrink heads with the best of them. But to some degree the size of this victory was dependent on the fact that Hannover did commit to trying to pull something back before it was too late, along with having a statue competition.

*Great to see Lahm more heavily involved in the offense today. It has been a struggle for him to find his way forward with Robben’s wide alignment in the formation. Today we were allowed to recall just what a lethal threat he can be.

*The period of relative rest for Müller seemed to have the desired effect today as he showed the killer instinct in front of net. Louis van Gaal’s confidence in him is certainly cemented by performances like today’s even if Müller really isn’t creating the goals. I would be perfectly satisfied for Bayern to continue using this forward configuration, with Gomez as the late super-sub in the Lyon tie.

*Keep your eye on that Pranjic-Olic combo for Wednesday. Ivica went straight to Danijel to celebrate his first goal, and you can tell the Croatian compatriots have become close this season. I continue to believe these two have a particular chemistry when they’re on the field together, but those opportunities have been few and far between.

*It was such a good day, even the amateurs kept a clean sheet. Bayern II got goals from Christoph Knasmüllner and Deniz Yilmaz to defeat Wacker Burghausen.