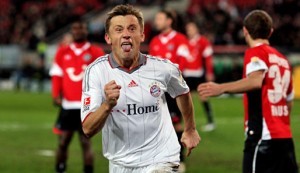 FC Bayern Munich finally return home to the Allianz Arena Saturday after a two week road odyssey. In the penultimate home match of their Bundesliga season, Bayern take on Hannover 96. There will be no live broadcast coverage of the match in the U.S. GOLTV will show the match on delay starting at 4 p.m. Eastern time. Delayed broadcasts will also be available at 9 a.m. Sunday in Australia on Setanta and at 22:30 Saturday in the UK on ESPN. Since this writer didn’t anticipate the DFL actually putting this particular match up at a 12:30 Eastern start when making some plans for this Saturday months ago, I’m not going to be available to follow a stream live. Therefore, the site will remain “dark” with respect to the result until after the GOLTV broadcast.

Living on the Edge

Bayern might have a bit less animosity toward Hannover 96 than the average opponent. After all, they did us a favor by dealing Schalke an unexpected blow, defeating the Gelsenkirchen outfit 4-2 last week. However, beyond the emotional boost if may have given Mirko Slomka’s troops, I don’t think there’s a lot to take from that match to apply to this one. Didier Ya Konan might have been named Bundesliga player of the week for his brace, but by my eye, both of his goals were as much due to Schalke blundering to his skill. The opening goal for Hannover was another blooper, an own goal from Westermann. Additionally, the back four for Hannover completed just under 60% of their passes–bottom line, the result was great for them, but the performance left a lot to be desired. Bayern should look to Hannover’s 0-0 draw at Hamburg two weeks ago as the situation to avoid on Saturday. Despite just 34% possession, and playing 30 minutes with 10 men, Hannover got a point there.

Slomka’s lineup is likely to see several changes from last week. Elson and Arouna Kone, both of whom started against Schalke, suffered season ending injuries, and will be out. Leon Andreason, Jan Rosenthal and Altin Lala are also long-term absentees for the 96ers. On the plus side, Hannover will have Jiri Stajner back from suspension, and Constant Djakpa will also be available. Djakpa, the pacey Ivorian midfielder gave Philipp Lahm occasional fits in the in the Hinrunde match between the clubs, but had nothing to show for it in the end. This could very well be your last chance to see longtime right back Steve Cherundolo play for Hannover. The American defender, with the club since 1999 but out of a contract at season’s end, was saluted by the hometown fans last week.

Hannover have managed 13 goals in 14 away matches–only Mainz is a more homesick squad in that category. They’ve been shut out in 6 of those 14 matches, and have not scored in their last two away matches.

A Week of Not-Necessarily News

A pretty ho-hum week on the surface level for 1st place Bayern, with taking Monday and Tuesday off and all. Of course there is no shortage of drama to cover in the media when there is no mid-week match to consider. Getting the most attention was the newest exchange in the Ribery contract negotiations. Karl-Heinz Rummenigge, apparently disappointed that the “birthday pen” gifted to Ribery was not immediately used, said he had no plans to sell Ribery. Translation: We need an answer from this guy so we can figure out what the hell else we’re going to do in the off season. Ribery, now famous for setting arbitrary deadlines and then denying they were deadlines, indicated he would make a decision “within 10 days”. Apparently he feels that he won’t need to concentrate on the sporting situation in 10 days? But the actual translation: I’m going to give my assertion that this team isn’t good enough to win the Champions League one more roll of the dice so I can still use it as an out. Look for something like “the situation has changed, and I need to make some different considerations” in about 10 days from now.

One roster move that will affect the team is that Michael Rensing will play with the amateurs this weekend. That means Thomas Kraft will be the backup to Butt against Hannover. Since Rensing’s resume tape for this season consists of the Audi-Cup penalty shootout..and then the same shootout in slow-motion, it was deemed he could use some match practice.

Beyond that, a full squad reports healthy for this one. Will Louis van Gaal gives Diego Contento any time in this one? With an eye towards the first leg against Lyon, it would seem to be beneficial to give him at least a run out. Of course, maybe Van Gaal is more afraid he’ll get injured if he does that, considering what the last two months have been like for Bayern defenders. Update: On Friday Van Gaal said Badstuber was “tired” and suffering from “muscular problems”, indicating that it was questionable whether he would play. It will be interesting to see if Van Gaal decides to start with Müller on the bench again. If he does, it represents a shift in his overall thinking about the starting 11, as he has used Müller only very sparingly as a substitute.

In my mind, this is the easiest of the 4 remaining league matches, there are no mid-week distractions, a full week to prepare, the first home match since the Man United match, and the fans should be louder than usual for a match of this stature. The team will also know the result from Schalke’s match by virtue of the later starting time, and that ought to give an extra impetus, especially if Schalke win, and regain 1st place pending Bayern’s result.