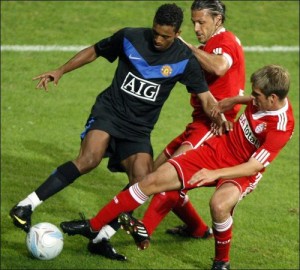 *In the weekend separating the two legs of the matchup, Manchester United will host Chelsea in a match that could determine the Premier League champion. Meanwhile, Bayern will visit Schalke 04 that same weekend, in a match of similar importance for the title run in the Bundesliga.

*Although Bayern’s Arjen Robben never lost a match against Manchester United while playing for Chelsea, he also never scored a goal against them.

*Bayern defender Daniel van Buyten played in 5 matches for Manchester City in 2004, which included a 4-1 drubbing of United by City.

*Keeper Jörg Butt faced off against Man U in the Champions League in 2002 with Bayer Leverkusen. Leverkusen went through on away goals to face Real Madrid in the final.

*While Bayern could be at full strength in time for the first leg, some United players are certain to be out. Among them are Anderson, Wes Brown, John O’Shea and Michael Owen.

*The only record I can find of Louis van Gaal facing off against Sir Alex Ferguson is a pair of 1998 Champions League encounters when LvG was at Barcelona. Both matches ended 3:3.

*The one player involved in the tie that has played for both teams is Owen Hargreaves. However, the injury-plagued Hargreaves is not listed in the CL roster for United, and will therefore probably get the duty of doing 7,000 interviews about Bayern while getting close to his return in the Premier League.